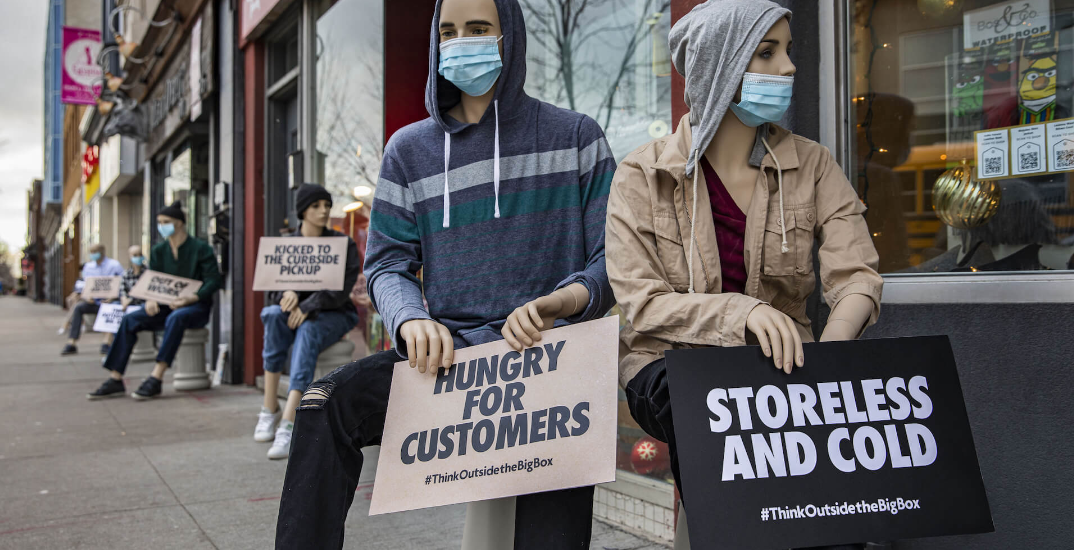 Mannequins searching for work have taken up residence in front of Toronto stores as a call to action to support local businesses during COVID-19.

Shops throughout the Broadview-Danforth and Queen West Business Improvement Areas placed the “out of work” mannequins at a dozen storefronts throughout their jurisdictions on December 15.

“This artistic mannequin installation acts as a call to action to support local businesses – otherwise it will be the death of local business,” the Toronto Association of Business Improvement Areas said in a release.

The lifelike mannequins each hold an attention-grabbing sign: some say they’re “Hungry for customers,” while others read that they’ve been “Kicked to the curbside pickup.” Others are “Storeless and cold.” 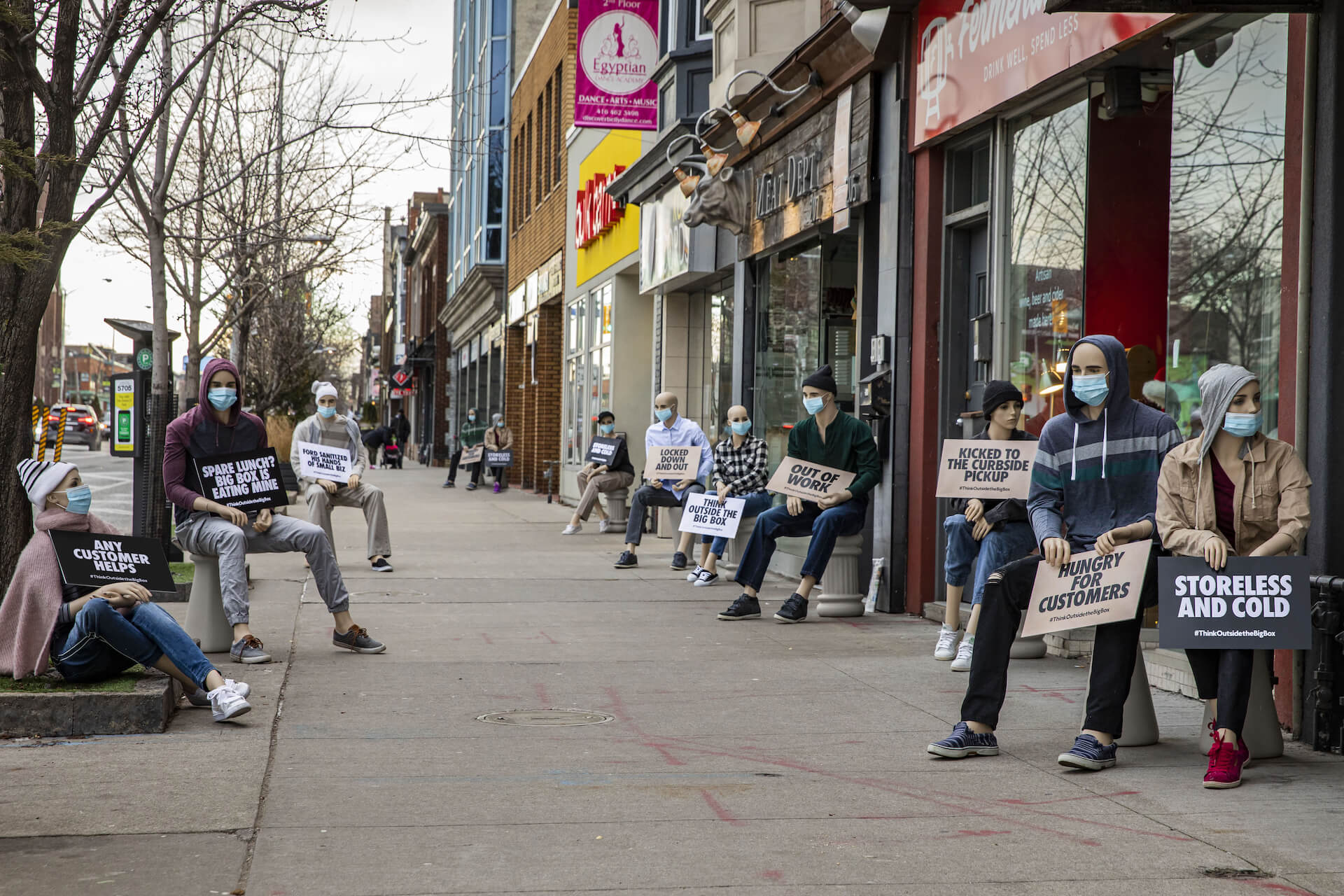 “We want to level the playing field with big box stores,” said Albert Stortchak, the Chair of the Broadview-Danforth BIA. “They sell many of the same products as our retailers. But they’re open and were closed. It’s a little unjust.”

Stortchak, who operates an antique lighting store on Broadview, said that small retailers are far more capable of regularly cleaning their stores and keeping customers safe through stringent sanitization protocols.

He clarified that the BIA is not against big box stores – they just want to balance the impact on independent retailers. An ideal first step would be allowing customers to make individual shopping appointments, Stortchak said.

The idea for the mannequin display was brought to the BIAs by the creative agency Zulu Alpha Kilo.

Rob Feightner, an operations director at the agency, said the concept is intended to raise awareness of the hardships small businesses are facing and give them a voice amongst bigger stores. 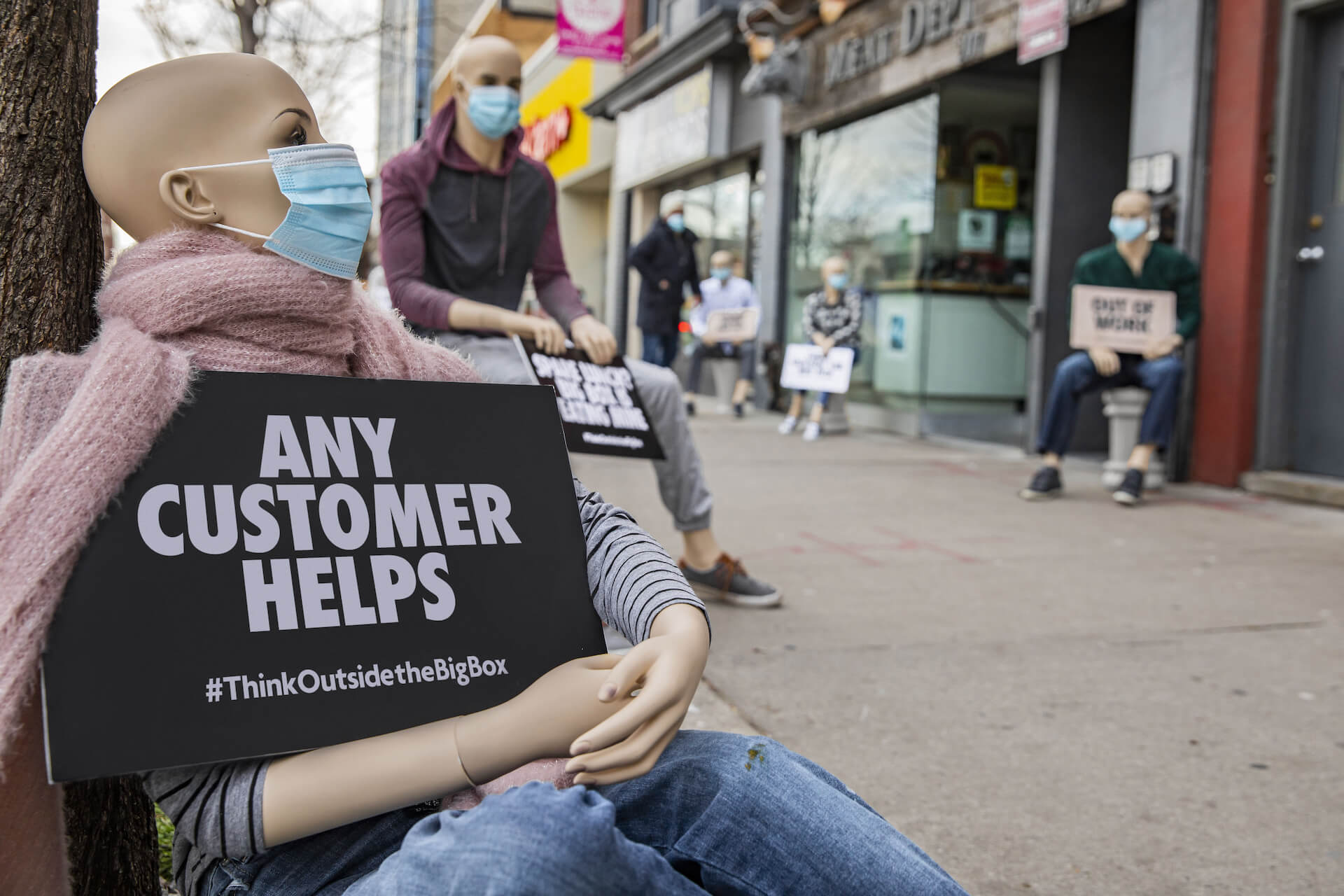 So far, the Broadview-Danforth BIA hasn’t received any response from politicians, Stortchak said. But passersby have been enthralled.

“The mannequins have gotten a lot of attention. One person said they would send a photo to Doug Ford,” he said.

Stortchak said that last Saturday, December 12, has historically been the busiest shopping day of the year. With retailers already missing that profitable day and the slower winter months ahead, the situation could become “quite devastating” for small businesses, he said.

The mannequins are part of the #ThinkOutsidetheBox initiative, which aims to highlight the fact that big box stores are allowed to remain open, while local in-store shopping has been banned across the city.

Toronto is currently in the Grey – Lockdown zone of Ontario’s COVID-19 framework. The restrictions include only allowing retail stores to be open for curbside pickup and delivery.

Stores that sell essential items, such as grocery stores and liquor stores, are allowed to remain open for indoor shopping at a reduced capacity.

The current lockdown measures expire on December 21, but Tory is calling for harsher restrictions to be put in place in their wake.

The mannequins will officially be out on the street until the end of the day on December 17. But many business owners have added their own mannequins to the display and will keep them out at their discretion.

Stortchak said, his, will stay in the shop window, sign in hand, until the spring.

“You’ve got to stay a bit optimistic,” he said. “When we get out the other side of this, there will be an expulsion of demand.”

“We’ve just got to get through the winter.”