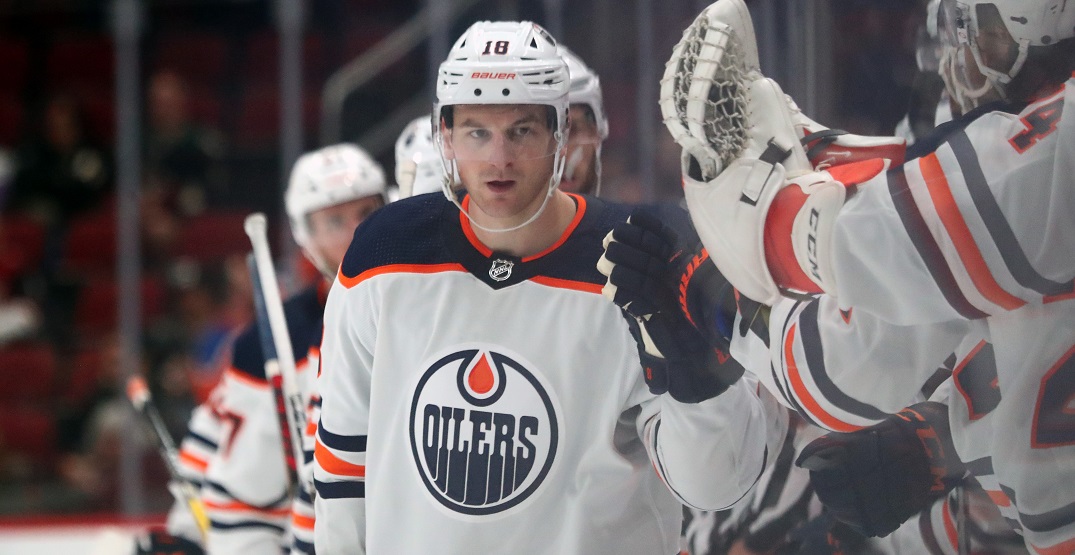 Former Toronto Maple Leafs winger Zach Hyman has been off to a red-hot start with the Edmonton Oilers.

Hyman signed a seven-year deal to join Edmonton this summer after spending 345 games in Toronto over the course of six seasons through a trade with Florida back in 2015.

In his first year with his new team, Hyman’s put up six goals in six games leading a team to a 5-1 start.

Despite an overtime win over Chicago last night, the Leafs have won just three of their first eight games, including a four-game losing streak last week.

Having scored just 16 goals in their eight games so far, it’s sensible that Leafs fans wonder if letting Hyman go was a mistake. No Leafs player has scored more than three goals this year.

But here’s why there’s no use overthinking Hyman’s departure to the Oilers, even if he’s doing quite well for himself.

The most important thing to remember about Hyman’s contract in Edmonton: it’s a long deal. Already age 29, Hyman is signed until the 2028 offseason with a full no-move clause for the first five years.

The Leafs currently don’t have any players signed past 2025. Sticking Hyman into their future for such a long time as he ages into his late 30s seems to be hard to fathom.

Toronto and Hyman debated different contract structures, but the lack of a no-move clause was one of the reasons why Hyman ultimately went to the Oilers, per Sportsnet’s Elliotte Friedman on the 32 Thoughts podcast.

Friedman added that Toronto was prepared to offer a $4.5 million x 8 year to Hyman, but only if they were able to have the flexibility of not having a no-move clause.

For a GM that’s gotten plenty of criticism for overpaying for free agents, Kyle Dubas appeared to stand his ground on this one.

The Leafs aren’t that bad as they’ve shown to start the year, and Hyman likely isn’t that good.

Hyman has scored his six goals on just 15 shots, a remarkable 40% shooting clip. Over his career in Toronto, Hyman put up a 12.2 shooting percentage, with his highest single-season total of 19.8% in 2019-20, a season where he scored a career-high 21 goals in just 51 games.

Meanwhile, the Leafs have a team shooting percentage of just 5.8%, ranking 31st in the league.

Conventional wisdom would suggest that both numbers are set to head towards a more reasonable shooting percentage. No team in the NHL shot lower than Detroit’s 8.18% last season, while no player in the league who played over 20 games last year shot higher than Marcus Foligno’s 27.5%.

It’s easy to react to the small sample size of Hyman getting hot while the Leafs are struggling, but it’s unlikely either extreme trend will continue.

Hyman’s time in Toronto was largely spent playing alongside arguably the league’s best-shooting centre in Auston Matthews. Last season, Hyman spent 57% of his 5v5 ice time skating alongside Matthews, much more than any other centre.

Hyman was known in Toronto for digging the puck out on a hard forecheck and getting it to the team’s shooters, whether it be Matthews, William Nylander, or John Tavares.

And while he’s playing with another set of superstars in Leon Draisaitl and Connor McDavid, his role from Toronto to Edmonton has shifted slightly at both even strength and on the power play, where Hyman has put up three of his goals.

McDavid’s league-leading 72 assists last season in just 56 games detail how aggressive he is as a playmaker. McDavid has provided a helper on five of Hyman’s six goals so far. Last year, Matthews provided assists on just six of Hyman’s goals all season.

This isn’t to say that McDavid is “carrying” Hyman, as he’s a heck of a talented player in his own right. But it’s certainly a different playstyle than Hyman was used to in Toronto, as McDavid and Draisaitl are more likely to set him up for a shot than Matthews was.