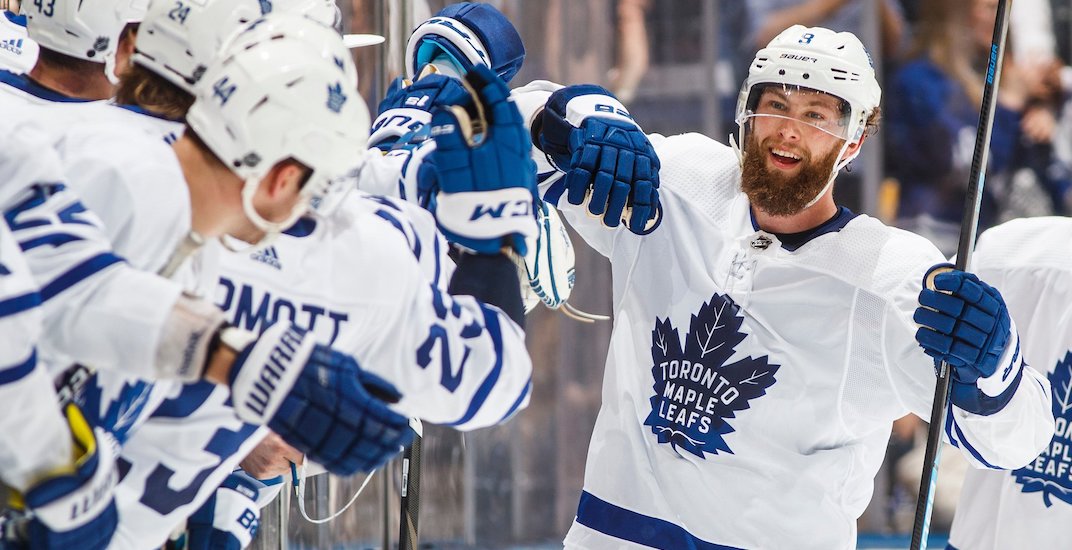 With the Toronto Maple Leafs getting out to a bit of a slow start to the season, fingers have been pointed all over for the team’s ills.

But it’s been near-universally agreed that it’s hard to find fault with the performance of 31-year-old defenceman Jake Muzzin thus far.

Traded from the Los Angeles Kings last year after spending his entire career in California, Muzzin has arguably been the Leafs’ best defenceman to kick off the 2019-20 campaign.

Tuesday’s contest against Washington saw Muzzin play just seven shifts, as he had to leave the game following a hit from Tom Wilson. However, it doesn’t seem like the shakeup will keep him out long-term, with head coach Mike Babcock describing the injury as “a charley horse.”

And although there’s still much of the season left to play, it’s never too early to wonder what his future holds in Toronto.

With Muzzin’s $4 million cap hit coming off the books after this season, general manager Kyle Dubas has no doubt been pondering ways to keep his marquee defender.

Muzzin himself carries a fairly well-rounded game. Always known to have strong possession stats, his even strength Corsi-for percentage (56.2%) is tied with partner Tyson Barrie for the team lead amongst defencemen.

Despite typically being lined up on the second pair, his ability to play high minutes had actually seen him pick up the second most minutes of any Leafs defenceman thus far (behind Morgan Rielly) heading into Tuesday night’s game, though his 4:22 mark skewed his numbers a bit.

This past weekend’s back-to-back saw Muzzin score once in each game, with each goal coming in the final minute of the period.

His goal this past Friday highlighted two of Muzzin’s key strengths: strong hockey IQ and positional play, as it seems like he’s always in the right spot where he needs to be.

He’s also been a key figure on the Leafs’ PK so far, logging just under 40 minutes whole shorthanded this year.

All in all, Muzzin has registered nine points so far in fourteen contests, which is putting him on pace to hit 40 points for the fourth time in his career.

Judging a complex defence market is never an easy task, but a few recent contracts could give us a ballpark range for what kind of contract Muzzin could get in Toronto.

Since June 2018, eight defencemen between the ages of 27 and 35 have re-signed with their teams on four-to-seven-year deals.

It’s tough to imagine Muzzin managing a seven-year deal, but something along the lines of a clean $5 million AAV on a five-year deal could be the sweet spot.

The Leafs face an interesting dilemma: they have just one defenceman on the current roster signed past this season. But with around $16 million to work with as of right now for next summer, the majority of that cap flexibility can be used on the back end.

Up front, 25-year old rookie Ilya Mikheyev is the only forward in the Leafs’ top-nine who remains unsigned past this season, while goaltender Frederik Andersen remains signed through 2020-21 as well.

While Barrie might be the more attractive free agent market for a team looking to make a free agent splash, it seems like the Leafs are attempting to optimize the one-year window they do have with him.

From Muzzin’s point of view, he himself has already been through the bulk of his career, winning a Stanley Cup in 2014 while grinding out a very successful resume from being drafted out of the fifth round back in 2007. With a young child born last April and having already moved within the calendar year, staying in the same market that he’s had success in would seem to be an attractive option to Muzzin.

By this time next season, it seems plausible that 2017 and 2018 first round picks in Timothy Liljegren and Rasmus Sandin could be playing on the Leafs’ main roster.

If they do end up extending Muzzin, re-signing the RFA in Dermott, letting their other UFA defencemen walk, and promoting those two prospects, the Leafs’ defensive pairings would shape up something like this:

This would involve the left-handed Dermott playing on his off-side, but it’s a role he played often through the latter half of last season, including the playoffs. At the very least, keeping Muzzin would allow the Leafs flexibility on finding Morgan Rielly a partner, without having to worry about filling holes on the left side of their defence.

Muzzin’s play through the opening month of the season has justified the high acquisition cost – a first round pick and two upper echelon prospects in Sean Durzi and Carl Grundstrom. Keeping him around long-term should be a no-brainer for the Leafs, and one Dubas should get a head start on.