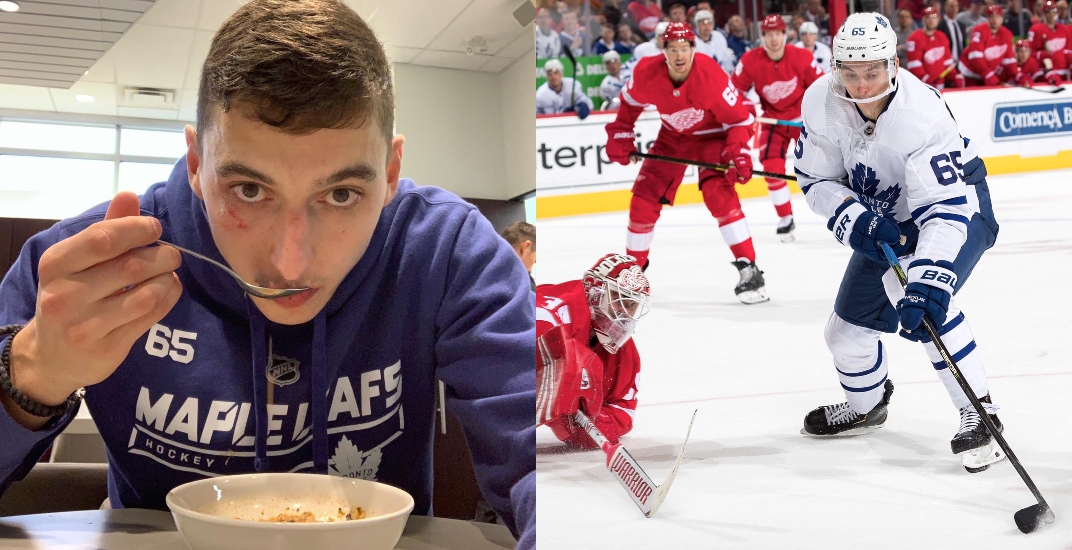 With so much talk of the Toronto Maple Leafs pumping money into their top four forwards, general manager Kyle Dubas had really no choice but to be creative in filling out the rest of his roster.

And there’s not much debate that it’s been the signing of Ilya Mikheyev out of Russia’s Avangard Omsk KHL team that has been the most popular move of the offseason in Toronto so far.

With three goals and three assists in his first eight games, Mikheyev has earned his way into the good books of Leafs fans. With a cap hit of just $900,000 on a one-year deal, the fleet-footed forward is currently fifth in team scoring.

But while fans have been encouraged by his on-ice play, a quote from an off-ice interview from opening night has earned Mikheyev adulation and a series of nicknames.

Talked about the adjustments to being in Canada now: “I like soup. I don’t know why you don’t eat soup. My girlfriend cooks for me, so I’m very happy.”

Referred to now as Soupy, Souperman, or simply Soup,  Mikheyev’s skillset was on full display Wednesday night in Washington as he scored the Leafs’ second goal of the night.

His teammates have bought into the craze as well, mimicking his diet on the bench.

Moore and Johnsson eating some soup on the bench after Ilya Mikheyev scores 😂 pic.twitter.com/OxbDcsq8Wd

Mikheyev’s agility and quick stick skills have made him a prime candidate for the Leafs’ penalty kill. He’s picked up just over 20 minutes of ice time there so far, leading Toronto’s forward group in that regard.

Overall, Mikheyev’s effectiveness has earned him just over 15 minutes of ice-time a night, seventh-most amongst Leaf forwards.

With Kasperi Kapanen having scored just once so far (and with Zach Hyman still out due to a knee injury), there’s plenty of opportunity for Mikheyev to move up on the team’s left-wing depth chart. A broken finger for John Tavares announced Thursday necessitates a shuffle of the team’s lineup, and while it isn’t great news for the team, it could give Mikheyev the chance to earn a longer look.

At Friday’s practice, Mikheyev found himself on a line with Mitch Marner.

For the casual observer, Mikheyev’s rise to prominence in Toronto might have been a surprise.

But for those who have dug a little into his past, it’s no surprise he’s found his way as an effective NHLer. Mikheyev suited up for Russia at the 2018 World Championships, scoring three goals in eight games (including one against Canada.)

Meanwhile, his fourth KHL season in 2018-19 was his best one, as Mikheyev’s 23 goals ranked sixth in the league.

Artemi Panarin, Nikita Gusev, and Evgenii Dadonov have been three of the most successful latest free agent signings from the KHL.

And while it’s still very early in his NHL career, Mikheyev figures to be the latest in a long line of successful Russian imports to the Maple Leafs.

From Nikolai Borschevsky’s famous double overtime winner in Game 7 of the 1993 Norris Division semi-final, to a late-career surge from Alex Mogilny alongside Mats Sundin, there have been plenty of success stories coming from Russia to Toronto.

More recently, Nikolai Kulemin’s 30-goal season in 2010-11 helped Toronto’s third line gain a reputation as one of the league’s best.

And though he eventually was shipped off to Ottawa this past summer, defenceman Nikita Zaitsev found his way into Toronto’s top-four over the past three seasons after being signed from the KHL’s CSKA Moscow team.

This week, it was reported that the Leafs aren’t necessarily finished with returning to the Russian well, as general manager Kyle Dubas was taking meetings with two former NHLers in defenceman Nikita Nesterov and forward Mikhail Grigorenko.

Per @plysenkov Kyle Dubas had meetings with Mikhail Grigorenko and Nikita Nesterov while being in Russia. Both will be UFAs next year #LeafsForever

Grigorenko, the 2012 12th overall pick from Buffalo, is following up a season last year where he put up 52 points in 55 games with 15 points in 16 games to start his season with CSKA Moscow. On the same roster, Nesterov, who had stops in Tampa Bay and Montreal, is putting up seven points through 17 games.

Of course, the meetings could be nothing much of anything, and just a courtesy stop while overseas. For every player that the Leafs sign, there’s bound to be two or three that they talk with and never come to terms with. But it is the success — at least so far — of players like Mikheyev that proves such visits worthwhile.

However, it isn’t just Russians who the Leafs are necessarily looking to sign from the KHL.

Rotating in on the Leafs’ fourth line with one goal through five games, American centre Nick Shore was another offseason signing from Russia.

While there was 236 games of an NHL resume on Shore before the Leafs signed him, he’d spent last year in the KHL after bouncing around with three teams in the 2017-18 season.

Though it’s just eight games into Mikheyev’s North American career, the initial returns have been highly encouraging. And if he keeps performing at a high level, it’ll be very tough for the Leafs to do anything but whatever they can to extend his contract past this season.