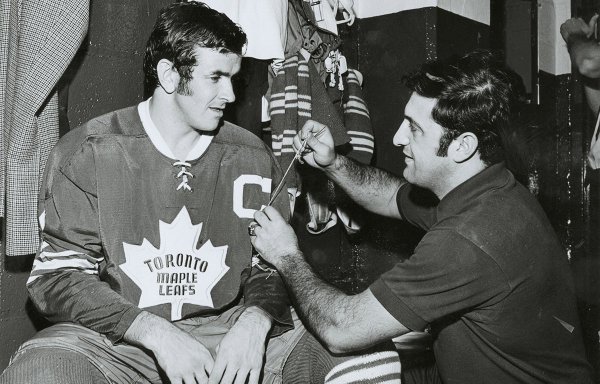 The Toronto Maple Leafs have chosen a classy way to open the season at the Air Canada Centre.

There we have it. Plus, Dave Keon's No. 14 is being retired as we speak #Leafs pic.twitter.com/WDxnAlM2I4

Before their home opener against the Boston Bruins Saturday night, the Leafs retired the numbers of the sixteen legends who previously had their numbers honoured.

In addition, the Leafs finally honoured (and retired) Dave Keon’s No. 14 to the rafters as well.

Keon has finally been getting the recognition he’s deserved, as he was also listed as the greatest Leaf of all-time on ‘The Hundred’ yesterday.

Keon played 15 seasons with the Leafs – six as captain – and won four Stanley Cups, including the last one the team won in 1967. He remained with the Leafs until 1975, when owner Harold Ballard told Keon he would be offered a contract.

Controlling his rights, Ballard set the compensation price for Keon so high that no other team would sign him either, effectively forcing him out of the NHL. Keon then played six seasons in the WHA, and a final three back in the NHL with the Hartford Whalers, before calling it a career.

What a job by Shanahan. Just righted a wrong that has cursed the Leafs for at least 50 years. Numbers rightfully retired. And Keon. Unreal.

The Leafs now have thirteen retired numbers, including No. 21, which was being worn by James van Riemsdyk. He’s now switched to No. 25 and will wear that number going forward.

Here’s a full list of the Leafs’ retired numbers:

The Leafs have now passed the Montreal Canadiens for most players with a retired number, a stat that seems fitting for the league’s oldest team.

It’s a nice honour for the legends of this team, and a fitting turn of the page as the Leafs look to a new crop of players to help write the team’s next chapter.