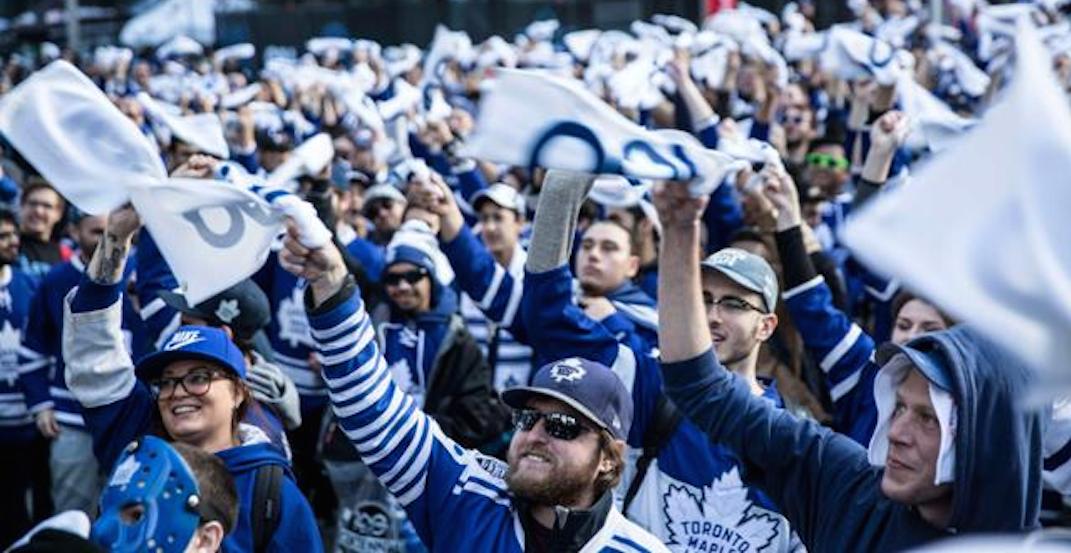 For the third year in a row, the Toronto Maple Leafs and the Toronto Raptors are heading to the playoffs.

With a total of 46 wins (23 at home), the Leafs finished third in the NHL’s Atlantic Division, with 100 points at the end of the regular season. And the boys in blue will kick off their playoff run this Thursday in Boston against the Bruins.

The Raptors finished their regular season as the top Atlantic Division team for the sixth time, winning 58 games this season to clinch second place in the Eastern Conference.

The Raptors’ first-round opponent will be determined tomorrow when all NBA regular season games have concluded, and the official schedule is released.

Once again Toronto sports fans can look forward to watching the games on the big screen alongside thousands of passionate fans at Maple Leaf Square during the team’s respective playoff tailgate parties.

From game to game, Scotiabank Arena will be a playoff hub for whichever team is playing at home. If the Leafs or Raptors are playing within the arena, the tailgate party in Maple Leaf Square will also be dedicated exclusively to the home team.

Both the Leafs and Raptors will still host tailgate parties for their respective away games, provided the other team is not playing a home game at the same time.

Join us at Maple Leaf Square this Thursday when the series kicks off!

Gates open at 5:00 PM. See you there! #LeafsForever pic.twitter.com/2Ogx98lEUk

During the parties, fans have the chance to win trips to road games and also enjoy giveaways, fun activations, special guests, a live DJ and more.

Additionally, during the tailgate parties, Real Sports Bar & Grill will have a beer vendor set up and Real Sports Apparel will sell exclusive playoff merchandise at a pop-up location.

Fans can enter from Lakeshore Boulevard West and Bay Street and gates open two hours in advance of the game.

MLSE is also reminding fans to be mindful of ongoing construction in the area surrounding the arena and fans are encouraged to take the TTC or GO Transit during the duration of both the NHL and NBA playoffs.