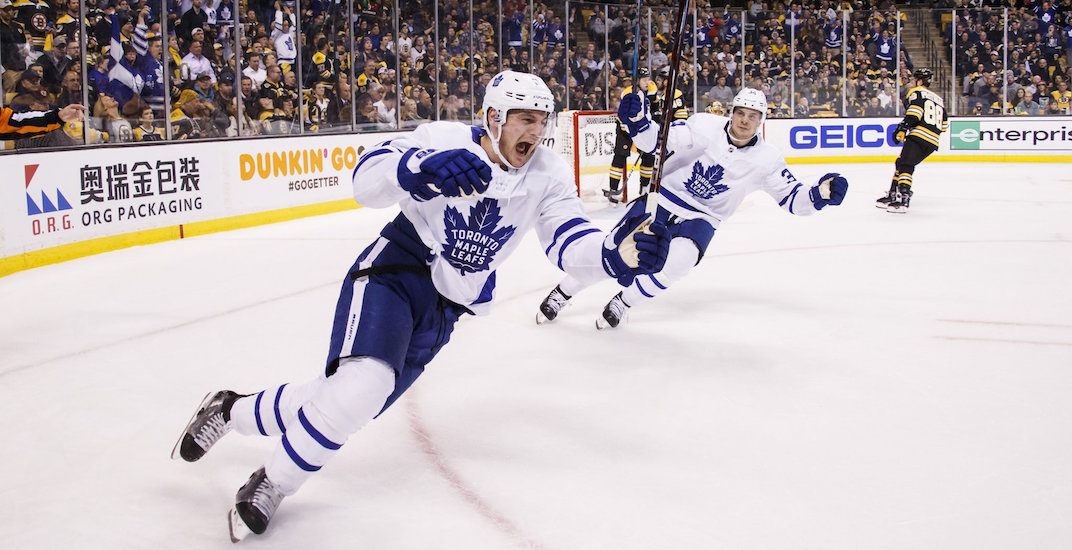 There weren’t a whole lot of positives to be taken from the 5-1 Leafs’ loss against the Boston Bruins in the opening game of their playoff series.

But while it was perhaps another painful memory for a fanbase that’s been filled with them over the years, it wasn’t really a ‘classic Leafs’ performance. Throughout the team’s 82 games in this past regular season, they actually didn’t suffer a single loss of more than four goals.

However, what was extra painful was the pending suspension coming for Nazem Kadri (he wasn’t on the ice at Leafs practice on Friday) for this hit on Boston forward Tommy Wingels in the third period.

Clearly aggravated by Wingels’ elbow to the face against teammate Mitch Marner, Kadri came in late and hit the Bruins forward in the head, resulting in a five-minute major penalty and a game misconduct.

Though the Leafs’ chances of a comeback in the game remained slim, Kadri essentially eliminated them and further jeopardized the team’s chances by taking himself out of the lineup.

It’s the second straight postseason that Kadri has come under fire for a controversial play. During last year’s first round series against Washington, Kadri went low against Alexander Ovechkin in the first period of Game 5, resulting in the Capitals star being helped off the ice as he headed to the dressing room.

While last year’s hit didn’t result in a suspension, this one, however, was much more clear cut, as Wingels both no longer had the puck and was left in a defenceless position.

Kadri’s value to the Leafs is obvious, which makes his history of dirty play all that more infuriating. He’s one of only 12 players in the league to hit the 30-goal mark in the last two consecutive seasons, while having seen his defensive game evolve leaps and bounds as a two-way centre under the tutelage of Mike Babcock.

To win Game 2 without Nazem Kadri, here are three things the Leafs need to do.

1. Get their top line away from Bergeron

Easier said than done, but the combination of Patrice Bergeron, David Pastrnak, and Brad Marchand torched the Leafs in the opening game.

Pastrnak picked up a goal and two assists, Marchand had one of each, and Bergeron added one assist. With Boston being at home and getting the last change and their preferred matchups, all three players posted a on-ice possession percentage at even strength of at least 75%, meaning they were outshooting the Leafs at least 3-1 when those three were on the ice.

The Leafs’ two top defencemen, Jake Gardiner and Morgan Rielly, were mostly helpless in defending them, and the Leafs’ own top line was unable to do much while matched up against the Bruins’. Their lone goal came without either of Marchand or Bergeron on the ice, as they stepped off the ice moments before Hyman was able to convert.

Find a way to stop Bergeron’s line offensively, and free up Auston Matthews to work his magic.

It’s a cliche, but a hot goalie really can make all the difference in the playoffs.

While you can’t fault him for all five goals against, as he was faced up with 40 shots, it’s safe to say Frederik Andersen didn’t have his best performance on the night. In fact, in all other 12 games this season where Andersen faced 40 or more shots, he didn’t suffer a single regulation loss, going 9-0-3.

Even if the Bruins come out firing strong again, having a great performance in net could be the make-or-break for the Leafs in giving themselves a chance this series.

3. Special teams need to be… special

During the regular season, the Leafs operated the league’s second-best power play unit, clicking on 25% of their opportunities. In Game 1, Toronto went 0-3 on the man advantage, despite looking dangerous early and having more than a few close chances.

On the flip side, they allowed a trio of Bruins power play goals, another thing they hadn’t done all season.

It’s a futile point arguing how things could have turned out differently, but it’s easy to see how a reversal of fortunes on their special teams could very easily swing Game 2 around in their favour.