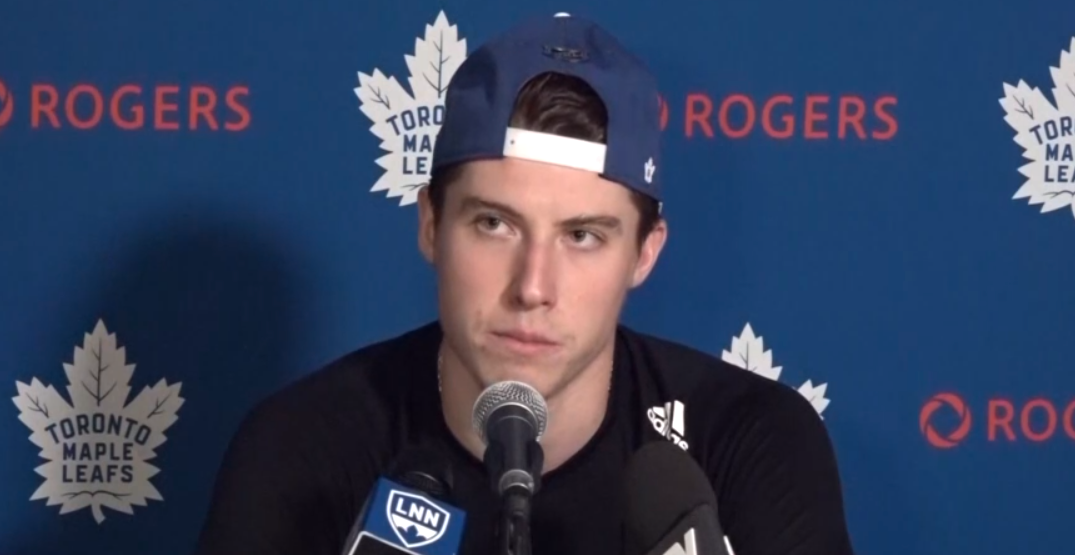 Toronto Maple Leafs forward Mitch Marner hasn’t been off to the hottest start this season.

In six games, he’s put up just a lone assist, while failing to produce a single goal.

With a 2-3-1 record in those six games (including three straight losses), Marner’s been the target of heavy criticism to begin the season.

Compound Marner’s inability to score in last year’s seven postseason games against Montreal as well as his cap hit of $10.9 million that ranks seventh in the league, and it’s easy to see why the criticism has been pointed at the Leafs’ winger from much of the fanbase.

Saturday’s 7-1 blowout loss to the Pittsburgh Penguins marked the 14th consecutive game dating back to last season in which Marner failed to score.

But he brushed off any thoughts that this slump would have long-term effects on the team.

“I don’t think we can be concerned,” Marner said to reporters. “We’re still early in the season. We just have to make sure we go over what we did wrong tonight. We know a lot of things we did wrong.”

Marner has put up 16 shots on net this season, while Auston Matthews has put up 17 shots in just three games. Both players remain without a goal.

Marner said that banging in a few goals off rebounds could help fix the pair’s scoring woes.

Leafs’ coach Sheldon Keefe said after Friday night’s loss that media should be “asking as many questions” of Matthews and Marner when asked if newcomer Nick Ritchie was to blame for the top line’s scoring woes.

But after Saturday’s loss, Keefe backed Marner to bounce back after a slow start to the season.

“The way that he’s approaching the game and approaching his teammates, the way he’s talking on the bench with the energy that he has… I think he’s doing a really good job of staying focused on the things that he can control and trying to, trying to get his game going and trying to continue to be a leader for the team,” Keefe said.

The Leafs continue their road trip with games this week against Carolina and Chicago, before returning home to play Detroit on Saturday night.