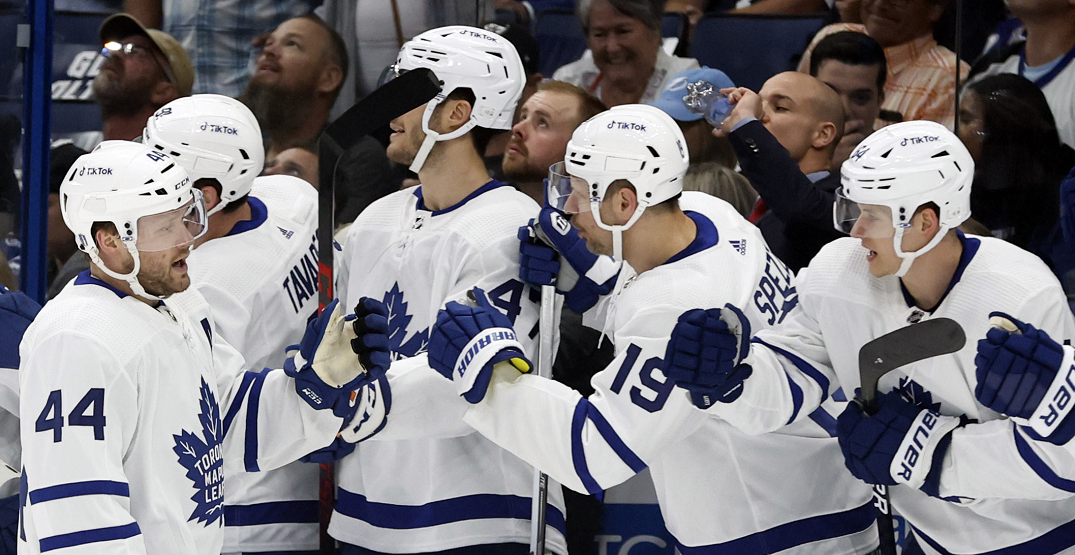 The Toronto Maple Leafs didn’t make things easy on themselves tonight. But in the Stanley Cup Playoffs, they don’t ask how — simply how many.

During Friday night’s Game 3 in Tampa against the Lightning, the Leafs squeaked out on top by a 5-2 score at Amalie Arena.

Toronto now holds a 2-1 series lead over the two-time defending Stanley Cup champions. It got a little dicey in the final frame, sure, but the Leafs still picked up the all-important road win.

Toronto put in the first three goals of the evening, and were able to hold onto the lead from there.

Morgan Rielly opened the scoring for the Leafs, finding the back of the net on a first period power play less than five minutes into the game.

From defence to offence!! 🤩 pic.twitter.com/BosuTcWQuY

Toronto looked to be off to a slow start to the second frame, but David Kampf found the twine with a seeing-eye shot that gave Toronto a three-goal cushion.

Ross Colton scored the Lightning’s first goal of the evening, with Ondrej Palat cutting the lead to one with just under 15 minutes remaining.

But Ilya Mikheyev netted a pair of empty net goals in the waning moments of the game to put things out of reach.

Jack Campbell made 31 saves for the Leafs on the night for his second win of the series.

The game marked the series debut for Justin Holl and Jason Spezza, as Wayne Simmonds and Timothy Liljegren were in the press box for Toronto. Jake Muzzin battled through a blocked shot late in the second period where he was noticeably wincing, but remained in the lineup for the conclusion of the game.

Toronto won Game 1 on Monday by a 5-0 shutout, before the Lightning responded with a 5-3 win of their own on Wednesday night.

With the victory, the Leafs are one step closer to their first playoff series win in 18 years.