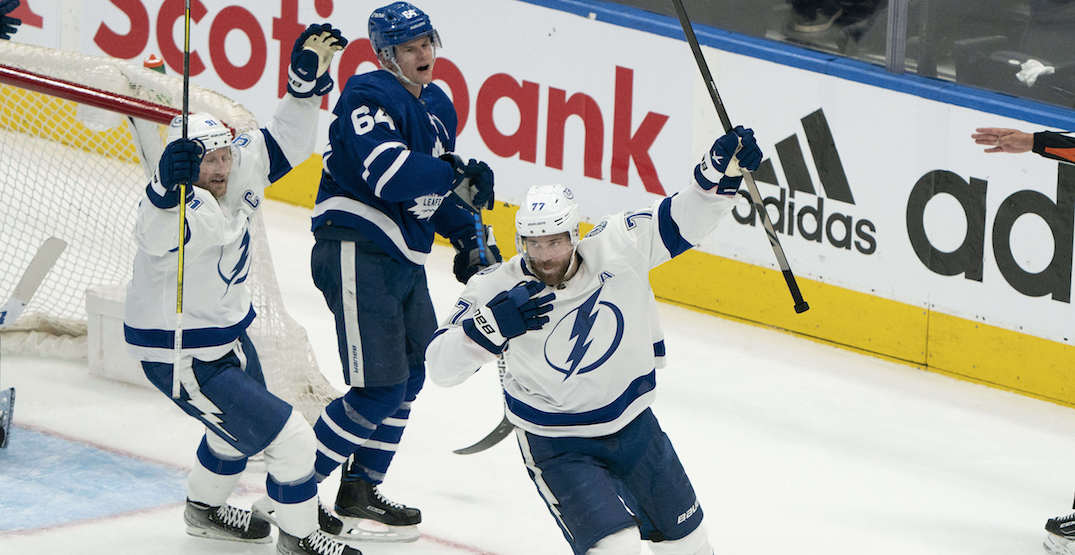 If the Toronto Maple Leafs are going to knock out the two-time defending Stanley Cup champions, it’s not going to be as easy as it looked it Game 1. The Tampa Bay Lightning bounced back from that series-opening 5-0 loss, taking home-ice advantage away from Toronto and evening up the series with a 5-3 win at Scotiabank Arena on Wednesday.

ANDREI VASILEVSKIY WHAT A SAVE 😱#StanleyCup pic.twitter.com/1OAirUDJti

They then gave up a deflating power-play goal to Victor Hedman in the dying seconds.

Hedman went on to add three assists for a four-point night.

Having missed the final three games of the regular season and the first game of this series, Michael Bunting returned to the Toronto lineup tonight for his first ever Stanley Cup playoff game. After Corey Perry extended the Tampa Bay lead to 2-0 early in the second period, Bunting got the Leafs back within one.

The hometown kid gets his first in the #StanleyCup Playoffs. 🤩 #LeafsForever pic.twitter.com/aVuSWs69xf

Nikita Kucherov, Ben Hagel and Brayden Point all scored to blow the game open for the Lightning, extending the lead to 5-1 early in the third period.

The Leafs were able to make things somewhat interesting late with a goal from Mitch Marner and a short-handed tally by Alex Kerfoot to make the final score a more respectable 5-3.

Shorthanded goals are in style in Toronto 👀#StanleyCup | #LeafsForever pic.twitter.com/oEiL754HwU

Marner’s play has been a major bright spot for Toronto so far in this series. Having faced heavy criticism for his play in previous postseasons, Marner has two goals and three assists through the first two games against Tampa Bay.

Much to the delight of his grandmother.

The Lightning still have not lost consecutive playoff games at any point since 2019.