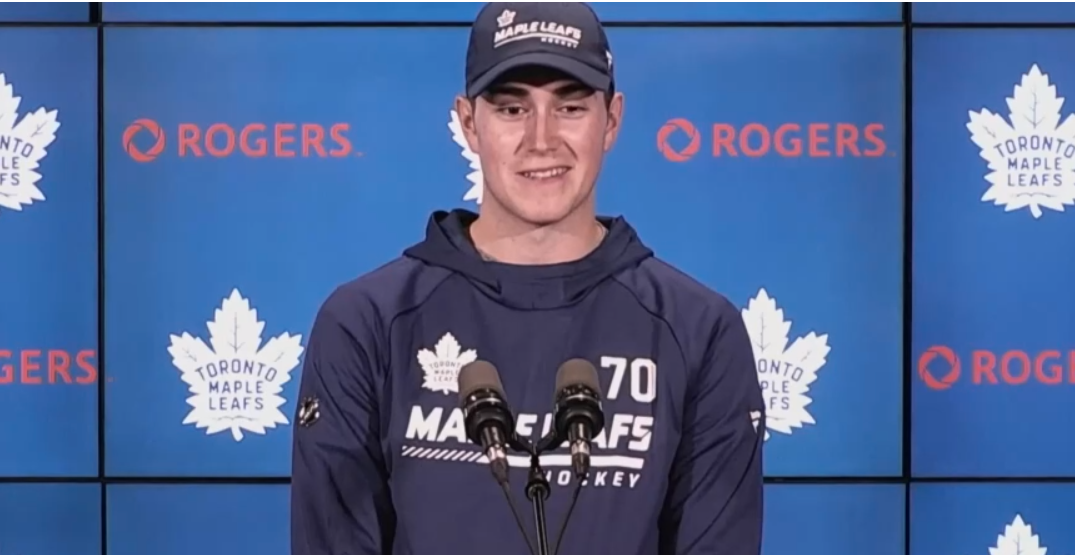 Toronto Maple Leafs emergency goalie Alex Bishop may have been on an NHL bench for the first time on Saturday night, but that didn’t stop him from having to deal with the pressure of university life.

Bishop, a University of Toronto commerce student and a USports goaltender, was called upon to replace Petr Mrazek, who was injured in his first game on Thursday night and is out a minimum of two weeks.

And with a pair of midterm exams coming up next week, Bishop spent the afternoon turning off his phone and studying for his upcoming tests.

“I typically do sleep [before a game],” Bishop told reporters. “But I went home and knew there wasn’t a chance I was shutting my eyes. So I studied a little bit. I did some work for my midterm on Tuesday.”

Bishop took the warmup for Toronto, but ultimately just sat on the bench as Jack Campbell made 20 saves in a 3-1 win over the Ottawa Senators.

Due to the Leafs’ salary cap situation (and an inconclusive COVID-19 test from defenceman Justin Holl), they weren’t able to call up their typical third-string goalie in Michael Hutchinson in time for Saturday’s game.

Hutchinson was added to the roster on Sunday however, as he now fills the emergency callup designation after Mrazek officially missed his first game.

Bishop is a regular in the Leafs’ typical emergency goalie rotation, which can be called upon to suit up if both of a team’s netminders get injured.

The last time it happened in Toronto was in February 2020, with Bishop saying he was one game away from being in his spot.

Of course, that role was filled by David Ayres, the AHL Zamboni driver who infamously played for the Hurricanes and beat the Leafs  following an injury to then-Carolina goalie Petr Mrazek (as well as James Reimer).

As for what he’ll remember most about the experience, Bishop said it was nice to get so many messages of support.

“I’m still kind of soaking it in,” Bishop said. “But I think [I’ll remember] just the reaction from all my friends and family and people that I probably haven’t spoken to in five or six years just messaging me.”

For now, though, Bishop’s right back on the study grind before his own season gets going in November.