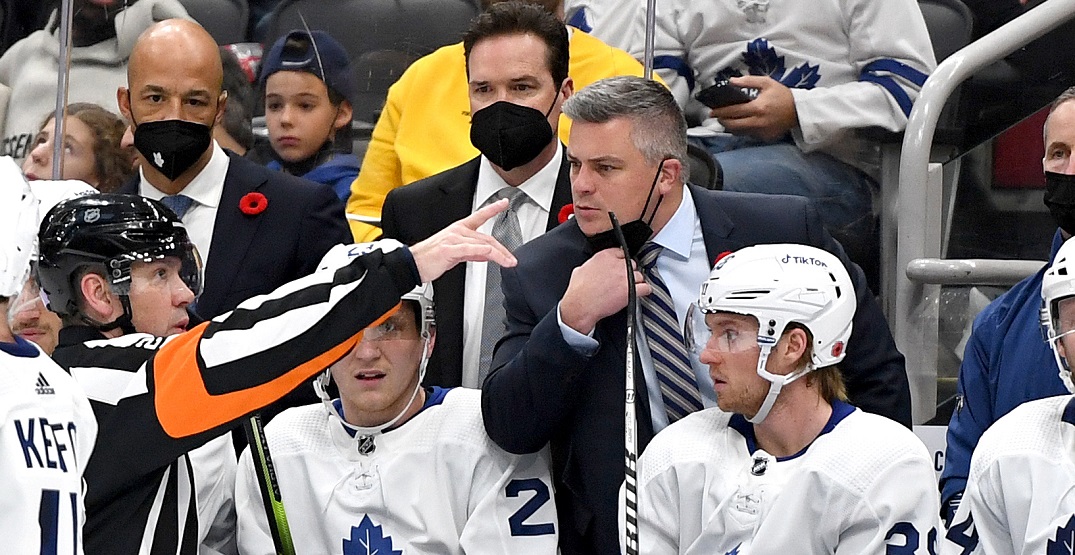 Toronto Maple Leafs coach Sheldon Keefe doesn’t appear to be the biggest fan of the refs.

Keefe told reporters Tuesday he was expecting Winnipeg’s Pierre-Luc Dubois to pick up a four-minute penalty for holding down Auston Matthews during Sunday’s game.

Pierre-Luc Dubois was all over Auston Matthews. 😳 pic.twitter.com/HEmQ91Nfoi

“I think it was worthy of an extra [penalty] on the other side,” Keefe said. “But the referees saw it differently and made the call as they see fit. We have to press on and deal with it, which is what we were doing.”

Keefe added that the emotions of the game were eventually “compounded” by Rasmus Sandin’s injury following a hit by Neal Pionk, which led to a suspension-worthy hit from Jason Spezza.

Keefe pointed out that the refs have not been too generous this year when it comes to the team’s star centre.

“I don’t think Auston’s drawn a penalty the entire season, which is strange considering how much he has the puck and how involved he is,” Keefe told reporters on Tuesday. “So, those kind of things are worth looking at if you’re involved with that.”

Through 23 games this year, Matthews has put up 15 goals and 10 assists for a total of 25 points.

Keefe’s answer is only partially true, though.

Matthews hasn’t drawn a single call at even strength this year, but has drawn four calls this year per NHL.com when you include 3-on-3 scenarios and special teams.

“It’s not specific to Auston, necessarily,” Keefe added as to whether he thinks his star players are not drawing as many penalties as deserved. “[Star players] get a lot more attention on them, therefore there would be more opportunity for such calls.”

Matthews himself has been known throughout his career as one of the game’s cleaner players, having picked up just 62 penalty minutes over his six seasons. He’s finished no lower than eighth in Lady Byng Trophy voting so far, finishing in the top three in each of the last two seasons.

On the whole though, officiating has been pretty even in the Leafs’ games this season. They’ve taken 90 penalties themselves, while drawing 89.