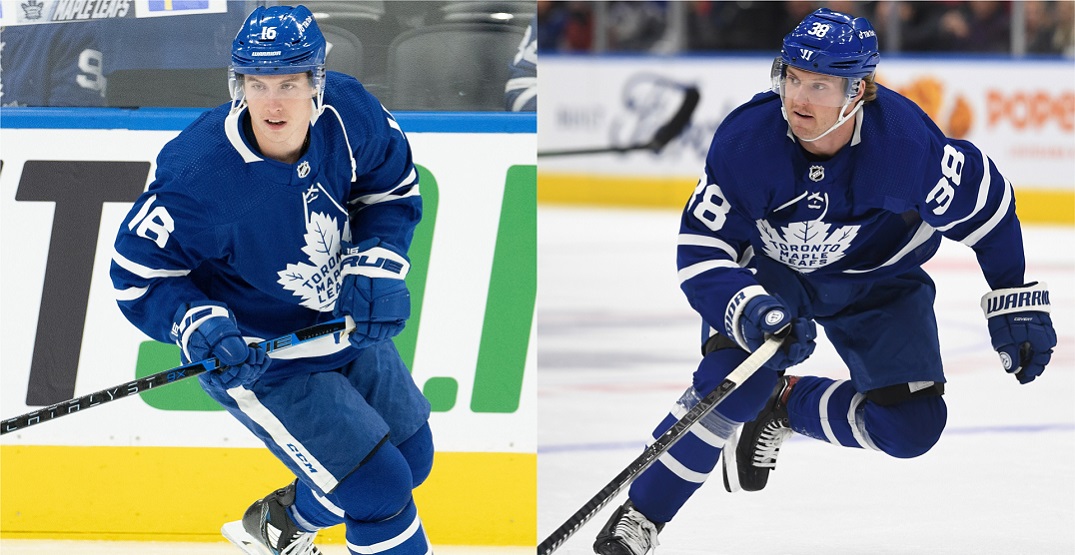 Mitch Marner and Rasmus Sandin are set to be out a little while longer for the Toronto Maple Leafs.

Today, the team announced that both Marner and Sandin had been sent to the NHL’s injured reserve list.

Marner, who has missed the Leafs’ last two games, is dealing with a shoulder injury after a collision with defenceman Jake Muzzin in practice last Friday.

Marner and Muzzin collided during a drill … Mitch got the worse of it & not happy, it appears @BarDown pic.twitter.com/q9wgWxhY4r

ESPN’s Kristen Shilton reports that his timeline could be 3-4 weeks to return to action.

Sheldon Keefe said it's a shoulder injury for Mitch Marner. Could be out 3-4 weeks.

Got bumped by Jake Muzzin in practice and as things settled, injury was worse than originally thought. Marner has since had an MRI.

Meanwhile, Sandin was on the receiving end of a knee-on-knee collision from Jets’ defenceman Neal Pionk in Sunday night’s 6-3 loss.

Pionk was suspended for two games for the play on Sandin, but that’s little consolation for Leafs’ fans, as Sandin’s timeline to return is 2-3 weeks, per TSN’s Chris Johnston.

Per @reporterchris, the timeline on Rasmus Sandin’s return from injury is 2-3 weeks #LeafsForever

To correspond with the pair of injuries, defencemen Alex Biega and Kristiāns Rubīns as well as forward Alex Steeves were all recalled to the NHL from the Toronto Marlies.

Steeves is the most interesting of the three call-ups, having scored seven goals and five assists for an even 12 points in 12 games with the Marlies this year. Both Biega and Rubīns have been up with the Leafs on short stints this year, but neither has made it into the lineup yet.

Meanwhile, forward Joey Anderson was also loaned to the Marlies in the process.

The Leafs take on the Columbus Blue Jackets at home tonight, with puck drop set for 7 pm ET.