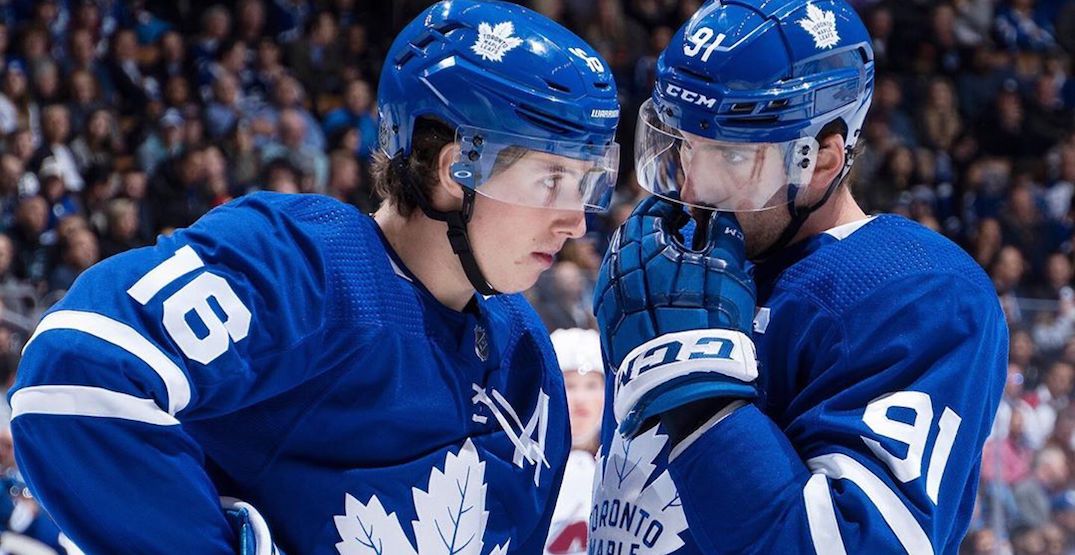 The Toronto Maple Leafs showed Monday night exactly what they can be capable of with a 3-1 victory over the Winnipeg Jets — a ruthless attack that’s full of star power. The deeper numbers showed exactly how Toronto can dismantle an opponent when they’re firing on all cylinders.

Per NaturalStatTrick, Toronto put up 41 scoring chances in all situations to Winnipeg’s 20, and outshot the Jets 32-16 through the game’s first 40 minutes. In terms of expected goals, the Leafs trounced Winnipeg 4.86- 1.67.

With three wins in four tries, the Leafs are one of just two teams (along with 3-0 Vegas) to have a trio of victories so far.

In Monday’s win, it was former linemates John Tavares and Mitch Marner providing the offence.

Tavares got the scoring started on the power play in the second period, while Marner crashed the net for a rebound goal putting the Leafs up 2-0 and added an empty netter late to close the game out.

Both Marner and Tavares currently sit tied atop the NHL scoring leaderboard, with 3-3-6 stat-lines through four games. If the Leafs are going to put in their best effort to run away with the league’s new North Division, they’ll need Marner and Tavares to keep pushing the team’s pace at full throttle all season long.

Even though both Marner and Tavares crossed the 60-point barrier in last year’s shortened season, it definitely felt like both still had something more to offer at times. And there’s one large reason for their early success that shouldn’t go understated — both appear to be dealing with a much clearer head space than a year ago.

In Tavares’ first year in Toronto in 2018-19 he put up 47 goals, with 26 of those coming off of Marner assists. The Leafs had a dynamic duo that combined for 182 points, and everything seemed to be going smoothly for the Oakville native.

Toronto hit the 100-point mark for a second season in a row, and had a prime opportunity to knock off the Boston Bruins in the first round of the NHL playoffs… before promptly losing in seven games once again.

All good, though, right? It was only year one of Tavares’ seven-year $77 million deal.

But then season two came. Whether it was just Tavares gripping the stick a little too tightly,  becoming a father for the first time, or getting handed the captaincy perhaps a little unexpectedly after Auston Matthews’ disorderly conduct charge, Tavares went from the most productive season of his career to just a simply ‘good’ one.

60 points in 63 games is nothing to sneeze at, but for a man who’d earned a reputation as one of the league’s top goal scorers, it wasn’t hard to feel like there was still something missing.

He had seven separate stretches of four games or more where he couldn’t find the back of the net. Totally normal for most players, but easy to criticize when the team isn’t doing as well as they’d hoped, with the Leafs finishing just eighth in the Eastern Conference.

Since debuting with the team in 2016, Marner leads the team in games played, assists, and points in that span.  So how do you take a fan favourite and turn them into a villain?

Inject some good old capitalism into the mix, and give them a contract that doesn’t quite match up with what other young, restricted free agents usually get.

Marner’s six-year, $65 million deal signed prior to 2019-20 gives him the league’s seventh highest cap hit in the league. It also immediately put a target on his back, as he’s been called greedy and selfish, with a quick search of his name on Twitter often attached with “price tag”, or a shot at his agent or family.

It’s hard to imagine the lofty expectations and anger for not taking a more team-friendly deal didn’t at least creep into Marner’s mind.

Marner still produced at just about the same pace as a year prior (1.14 points per game compared to 1.15), and finished 18th in league scoring in the shortened season. His even-strength production did see a drop off, but a career year on the power play kept his overall point totals in line.

But beyond the contract, Marner also gets a “full” season with head coach Sheldon Keefe – or perhaps more important, away from Mike Babcock, who had multiple public and private battles including the infamous degrading ranking of his teammates’ effort levels.

In the final minute in Monday’s game, Jets defenceman Neal Pionk took a run at Marner (and missed), with Marner dodging the hit as he scored an empty netter. A younger Marner might have been shaken, but the quote below shows that he’s doing nothing but looking forward.

Marner on Pionk: "Who cares? We won the game." #Leafs

With a hot start and facing nothing but familiar opponents from here on out, there’s a prime opportunity for both Tavares and Marner to continue to torch the league for the remainder of the season.