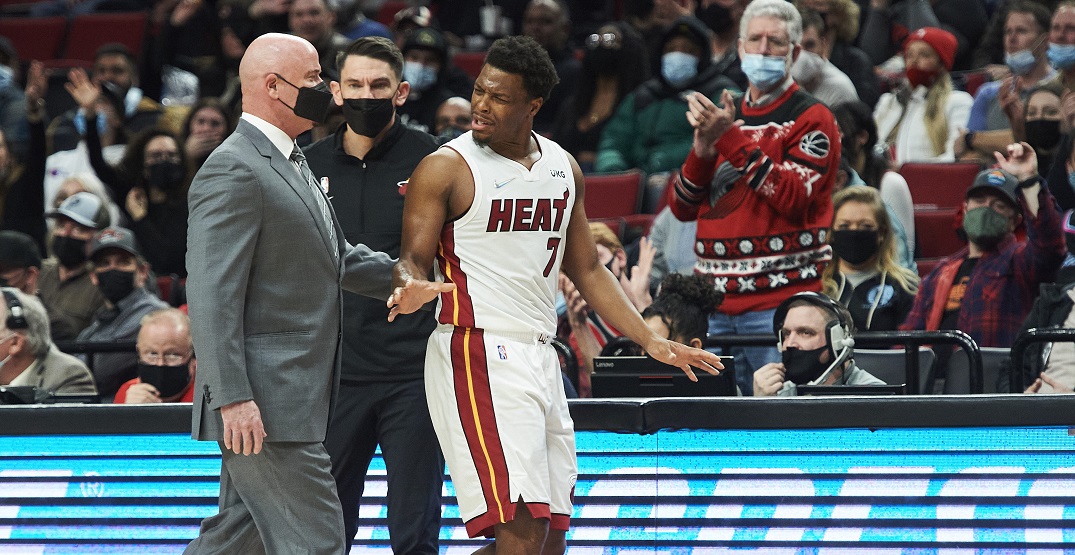 Kyle Lowry picked up one of the weirdest game ejections you’ll ever see.

In his first season in Miami after nine years in Toronto with the Raptors, Lowry earned his first ejection of the season with his new team.

Most ejections come after a physical altercation, a clear berating of the ref, or a foul that’s just a bit too hard for the referee’s liking.

But it’s easy to be confused at the nature of Lowry’s latest ejection, with the point guard seemingly tossed out for throwing the ball back to referee Matthew Kallio after a stoppage in play.

Crew chief Derek Richardson told Heat reporter Ira Winderman that Lowry was ejected for “continuous complaining” and “throwing the ball at a game official in an unsportsmanlike manner.”

The automatic ejection for a second technical foul is a longstanding NBA rule, but it’s hard to see how anything Lowry did by throwing the ball back to Kallio warranted a foul call.

Lowry did, however, appear to direct some profanity towards the refereeing crew on his way out.

Was Kyle Lowry calling the ref a pussy? 😂 pic.twitter.com/ckXkjHRTlx

The Heat still pulled through with the win, defeating Portland by a 115-109 score.

Per the Bally Sports broadcast, Lowry now has 11 ejections for his career.

“Kyle’s extremely passionate; I don’t know what exactly he said,” Miami Heat coach Erik Spoelstra said postgame. “I haven’t gotten an explanation yet about it, but it was pretty intense in the first half.”

Oddly, Lowry’s backup, Tyler Herro, was also ejected last night in the fourth quarter after a shoving match with Jusuf Nurkic that got both players tossed.