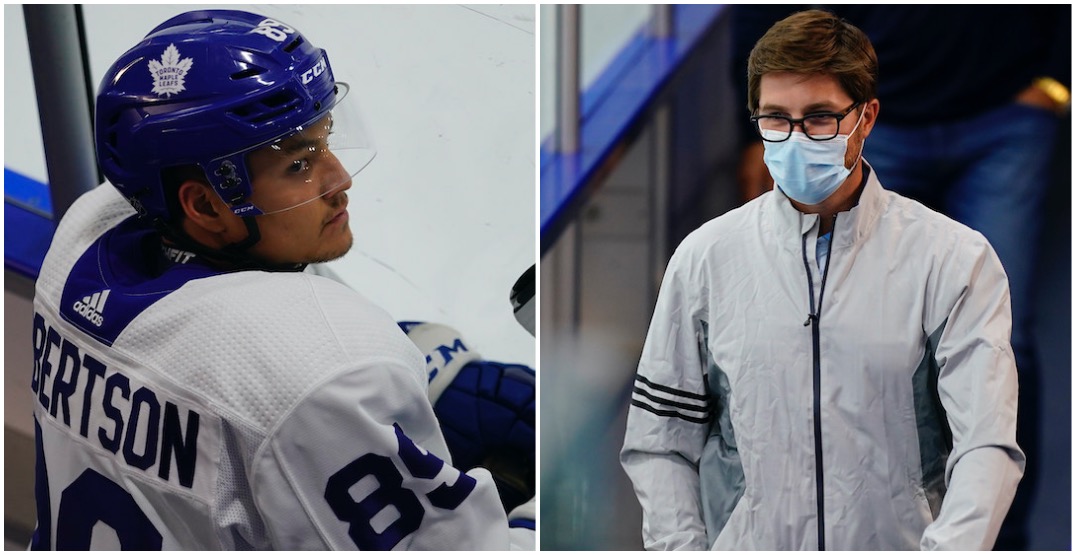 During his midseason press conference today, Toronto Maple Leafs general manager Kyle Dubas says that the team is willing to part with a future piece if the deal makes sense.

When asked if the Leafs would consider trading a top prospect to improve the team this season, he had a brief and straightforward answer.

“I think it’s very clear that our team will explore every opportunity we can to improve as we head towards the trade deadline.”

As the top team in the North Division, the opportunity is there for the Leafs to go on a long playoff run — and maybe even win the Stanley Cup for the first time since 1967. They might need to add some pieces to put them over the top though, which is where being willing to part with prospects comes in.

Robertson, a second-round pick in 2019, received praise during the playoff bubble with Toronto last season due to his hard-nosed play. He put up 55 goals in the 2019-20 season with the OHL’s Peterborough Petes.

Liljegren, a 2017 first-round pick, is in his fourth season with the AHL’s Toronto Marlies and increased his point total in each year he has been there. Sandin, a 2018 first-round pick, has played with the Team Sweden at the World Junior Hockey Championship in 2019 and 2020, where he recorded 14 points in 12 games over both tournaments and won the bronze medal in 2020.

Dubas added that if he is going to make a trade, he hopes it can happen soon due to the quarantine rules that force players coming into Canada to isolate for 14 days. He also mentioned that most trade conversations are focused on acquiring forwards, but he is open to any position.

The Leafs are still sitting at the top of the North Division despite back-to-back losses over the weekend against the Winnipeg Jets and the Ottawa Senators. However, Dubas is not too concerned about the team’s recent skid.

“I think the great teams find a way to stop the bleeding and pull themselves out and use those as an opportunity to grow and improve and get better. So that’s what I’m looking at now from our group.”

As for recent concerns surrounding starting goalie Frederik Andersen and his poor play, Dubas remained committed to him for now.

“If you go back through each of the seasons, anytime where Fred has found himself in a bit of a rut per se, he’s able to pull himself out of it and that’s the expectation of what we’ll see from him as we move ahead.”

The NHL trade deadline is less than a month away, on April 12.