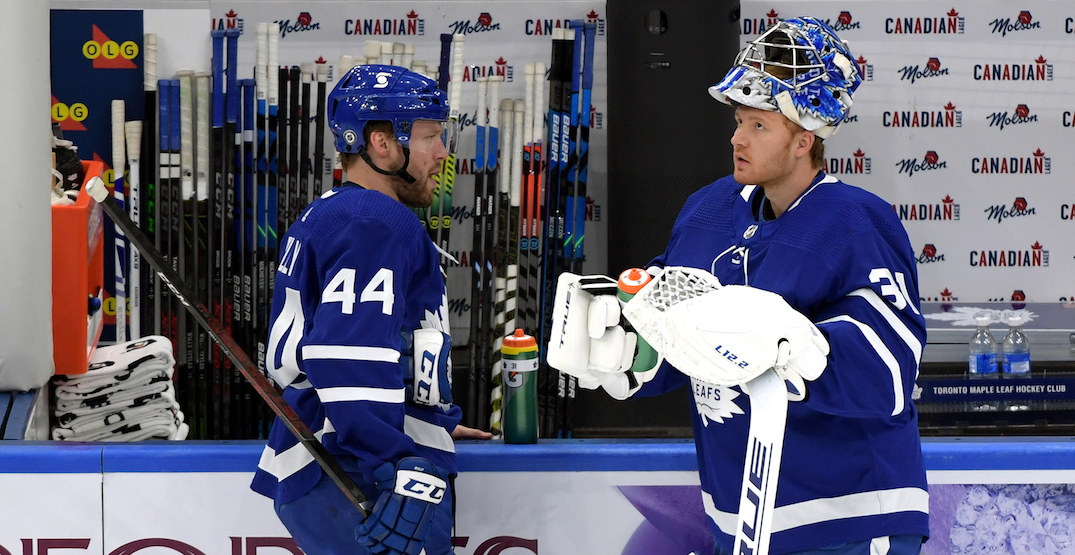 Ever since his introduction into the league in 2013-14, Frederik Andersen has always been about as consistent a goaltender as you can expect.

But lately? The 31-year-old might’ve just run out of gas. Coming off of a .909 save percentage in last year’s regular season in 52 games, Andersen had an opportunity in the 56-game season show that was a down year and that the Leafs should re-sign him once his contract expires at the end of this campaign.

His five games in last year’s playoffs against Columbus in the bubble were about as good as you could expect, as he allowed two goals or less in three of the five games and finished with a .936 save percentage.

But in the worst year of his career to date, it’s not a stretch to say Andersen actively hurting the Leafs’ chances of winning more often than not, with his .900 save percentage ranking 34th out of 49 goalies who have played at least 10 games this year.

It’s not all doom and gloom in Toronto, of course. They lead the North Division in points, wins, goal differential, goals scored, home wins, road wins, and just about every category that matters.

They’re actually tied for first in the division with Montreal in lowest goals allowed per game as well. Considering how poorly Andersen has played as their starting goaltender, that’s quite the statement to be made about their improved defensive work.

But trouble with a goalie on an expiring contract on the wrong side of 30 in the middle of a pandemic that might be the biggest reason why your team struggles in the playoffs for the umpteenth year in a row?

Yeah, that’s a bit of a doozy.

With all due respect to Andersen’s body of work with the Maple Leafs over the years, now could be the ideal time for the team to search for their long-term solution in goal.

The best thing about trading for goalies is there’s almost always someone you can pry away from a team that’s just a little too far away from the playoff race.

My top pick? Arizona’s Darcy Kuemper. Signed at $4.5 million this year and next, Kuemper is putting up a .914 save percentage and a 7-7 record on a Coyotes team that sits sixth in the West Division with a -15 goal differential. Surely the team’s management group isn’t fooling themselves that they’re contenders, right?

It might sound a little wild, but… bringing back Jonathan Bernier to Toronto is another short-term fix. Backstopping Detroit right now with a .912 save percentage, Bernier carries a cap hit of just $3 million that expires this summer.

Outside of superstars, most goalies can usually be acquired for not too steep a price: say, a second round pick and a prospect. If the Leafs are able to acquire, well, just about anyone else league-wide, it’s likely they’re an upgrade on what has been a very rough season for Andersen.

Jack Campbell is a lot of things: a former top goalie prospect, battling injury throughout this season, and a decent backup goalie who has never played an NHL playoff game at age 29. Michael Hutchinson has absolutely no track record of success at the NHL level that makes him a sensible starting option, despite actually winning two playoff games for Colorado last year.

They could hope for a miracle run from 22-year-old Joseph Woll, but out of these three, there are zero options that are a no-brainer to replace Andersen as the Leafs’ #1. You could throw up a Hail Mary with any of these three, but it wouldn’t ideally ever need to come to that.

The best thing about Frederik Andersen’s contract is that it is over soon. While many teams like Montreal, Florida, and LA have wrapped themselves into goaltending entanglements with goalies on lengthy deals that the player could never possibly live up to, Andersen’s five-year deal signed in the summer of 2016 seems to be coming to a close at just the right time.

With a cap hit of $5 million, paying Andersen has never handicapped the Leafs much in other areas. Outside of Andersen having a 10-team no-trade clause, shipping out the final couple months of this deal should not really be much of a problem.

With all that being said, even the general managers praised around the league as being innovative and crafty usually don’t trade for a new starting goaltender midseason.

But if the Leafs run out Andersen once more come playoff time and aren’t able to put together a strong run, there will be some extremely tough questions to be answered about why the team’s goaltending issues weren’t dealt with sooner when they were clear as day.