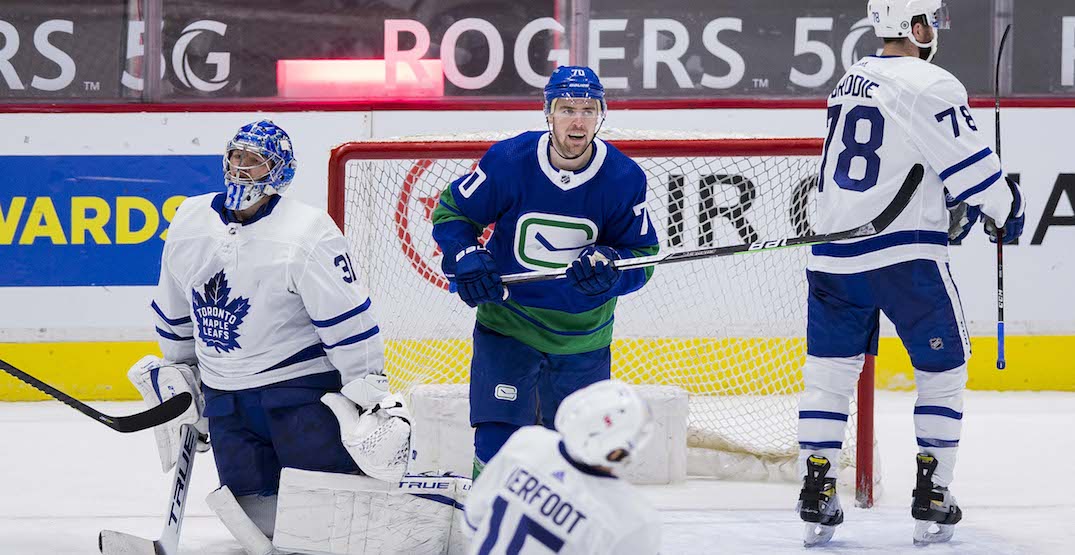 If you were to grade this year’s Toronto Maple Leafs team as a whole, the worst you could probably give them is an A-.

Despite a recent skid, they’re still first place in the league, have had most of their key players firing above preseason expectations.

The team’s defence has been shored up, and competent backup goaltending mixed in with a dynamic offence has made the Leafs the betting favourite nearly every night this year.

Despite the laughs that might come from the odd unexpected loss or two against Vancouver or Ottawa, there isn’t all that much to worry about when it comes to the on-ice product of the regular season Maple Leafs.

But that doesn’t mean the team can’t still look to improve. Even winning this North Division (or even the Presidents’ Trophy) shouldn’t be much of a success story, but rather the expectation of something bigger to come.

And the easiest, most seamless way to improve the roster? Look right around to those very teams you’ve been looking down at the standings to. With trades from American teams requiring the players to undergo a two-week quarantine, Toronto could do well to add some intra-division talent. Here are five options for the Leafs to consider.

Dream big? Why not target the 2019 Norris Trophy winner (and former partner of TJ Brodie) in Mark Giordano? The Flames might actually be an ideal trading partner for the Leafs.

With all due respect, they’re far from a Cup contender at this current stage and have been trending downwards since a five-game first round loss after winning the #1 seed in the Western Conference back in 2018-19.

After this season, it’s hardly likely that the divisional format will remain the same, so it’s not like they’re trading them to someone they could keep playing over the coming seasons. To make it work, some salary retention would be vital, but again, it’s not like Calgary is stocking up for a run anytime soon. Trading Giordano could be the start of a much-needed retooling in Calgary, a team that’s been close to success many times this decade but has never quite put it together.

Hey, if current trends continue with over-30 veterans, he’s just going to sign in Toronto in the 2022 offseason anyway. Might as well get something for him while you can.

Let me be clear about something: I don’t actually foresee this one happening, simply because a) he just signed this past offseason in Ottawa, and b) I’m not really sure where he’d slot into the Leafs roster.

But Tierney does bring a decent skillset with the opportunity to play at either centre or on the wing, and his contract doesn’t break the bank either. This season has a down year no question, but then again, it’s Ottawa.

Everyone gets a mulligan or two when stuck in the Senators organization, no matter how many fun young players they might have at any given time.

What’s old is new again? Connor Brown served as a serviceable winger throughout the lineup during his time as a Leaf, including scoring one of the most iconic goals in recent Leafs memory with his playoff-clinching winner against Pittsburgh in 2017.

Brown’s cap hit would require some manoeuvring for the Leafs to consider, but he would likely mesh well with former linemates as well as a litany of new faces in the mix. A fan favourite during his tenure in Toronto, Brown’s energy and ability to play with a variety of linemates could make him an attractive option to return home.

Familiar to most Leafs fans over the years through his days in Montreal, Jordie Benn could fill a bottom pairing roster spot or even come in as a seventh defenceman.

With a contract expiring this offseason, Benn would be quite easy to fit into the roster and shouldn’t cost much more than a mid-round draft pick to acquire.

He’d be more of a luxury/backup than a necessity, but could make sense as he’s likely on his way out of Vancouver anyway once Jim Benning finally throws in the proverbial towel on trying to compete this season.

Sticking with the Canucks theme, Tanner Pearson is many things: a Stanley Cup champion, a top-six left wing option and completely useless to the future of the Canucks if he doesn’t re-sign a reasonable deal this offseason.

The Canucks have a talented young core, but Pearson exists solely as a complementary piece and his contract is set to expire at the end of this campaign. Toronto likely wouldn’t have the space to keep Pearson around, and Vancouver could likely even re-sign him in the offseason after serving for the Leafs as a rental. Or, if he is destined to sign elsewhere, it would make sense for Vancouver to recoup some assets while they can for the 28-year-old winger.