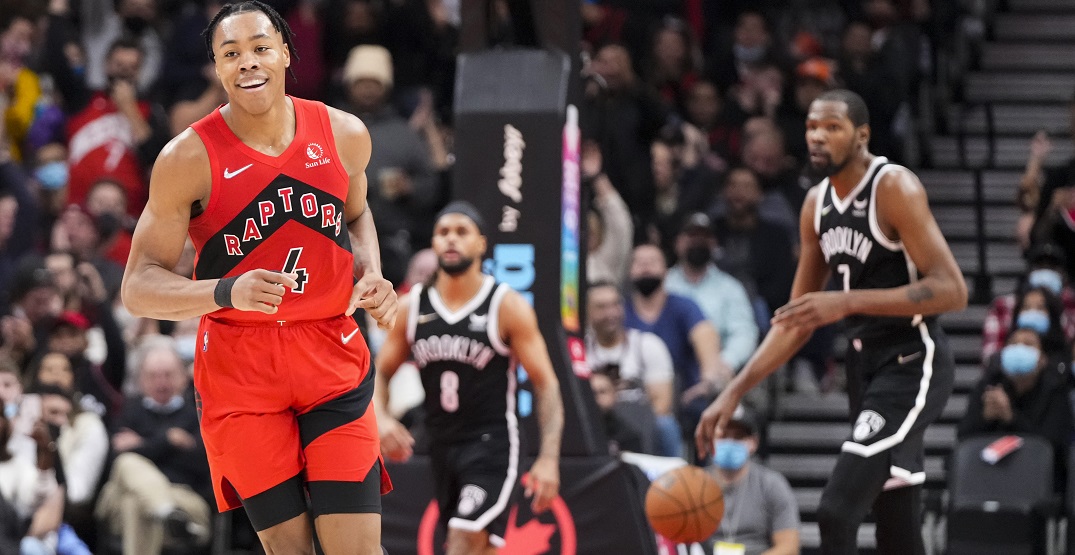 Durant and the Nets came through with a 116-103 win over Barnes and the Raptors in Sunday’s contest at Scotiabank Arena.

But following the game, Durant had praise for the youngster when asked what he liked about the first-year Toronto player’s game.

“There are a lot of guys who love to compete and love to win. What’s more rare about Scottie Barnes is his IQ for the game, his length. You know, his enthusiasm for the game,” Durant said. “All of that stuff shines bright when you watch him play.”

Barnes was selected fourth by the Raptors in this past year’s draft. Through nine games, he’s averaged 16.6 points, 8.7 rebounds and 2.4 assists.

“He makes winning basketball plays,” Durant added. “I think a lot of young guys in the league have a competitive fire, but he has something little extra as far as just seeing the game a little slower.”

“He knows how to play the right way,” he said. And he’s only going to get better.”

Durant added praise for Raptors’ head coach Nick Nurse, saying that his schemes and adjustments “can keep you up at night.”

Durant, who scored a game-high 31 points on Sunday, said prior to the contest that the Raptors have a “unique” fanbase.

Durant also reflected on his 2019 NBA Finals experience in Toronto while a member of the Golden State Warriors, which included an Achilles injury that forced him out of the playoffs and caused him to miss all of the 2019-20 season.

“The last time I was here was one of my lowest moments as a basketball player,” Durant said. “But I had some great memories in Toronto. I love playing in Toronto. The fans have been amazing to me.”