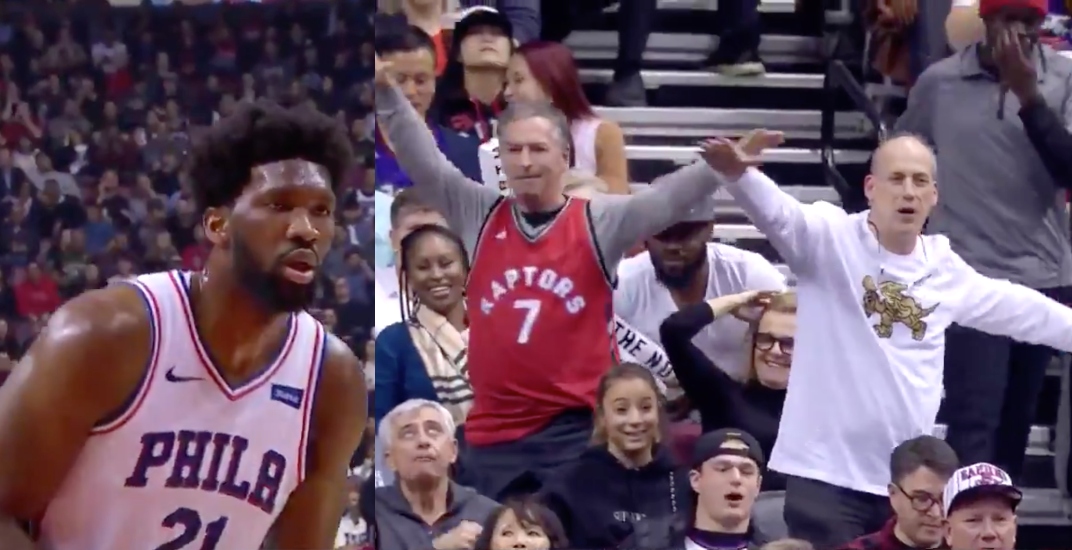 Raptors fans got the last laugh over Joel Embiid once again on Monday night.

The night was extra painful for Embiid, Philadelphia’s star centre, who had a night to forget.

Embiid was held to zero points on the evening for the first time in his 171-game NBA career. He shot 0-for-11 from the field, to go with 13 rebounds, two assists, and four turnovers.

The Raptors, who of course no longer have Kawhi, were led offensively by Pascal Siakam (25 points) and Fred VanVleet (24 points).

Embiid was mocked by Drake, who was sitting courtside, as well as Raptors fans all night long. Fans appeared to really get into the 7-foot centre’s head by pretending to fly around like airplanes while he shot a pair of free throws early in the second quarter.

He missed both of them.

Embiid appears cursed against the Raptors ever since his breakout performance in Game 3 of their playoff series. The 25-year-old scored 33 points that night, celebrating by flying around the court like an airplane.

Since he took flight, Embiid has shot 18-for-60 from the field in five games against the Raptors, averaging just 12.4 points per game — well below his 27.5-point average last season — as Marc Gasol appears to have his number.

Here’s a breakdown of his offensive performances against Toronto since Game 3:

Embiid was also the player who contested Kawhi’s Game 7 buzzer beater, unable to block the shot that ended the Sixers’ season.

The mocking of Embiid continued on social media, where fans had a good time as his expense.

Joel Embiid in the 5 games vs the Raptors since he decided to windmill dunk and do airplanes down the court:

embiid was 10 points away from a double double

That shot just shook the man to his core