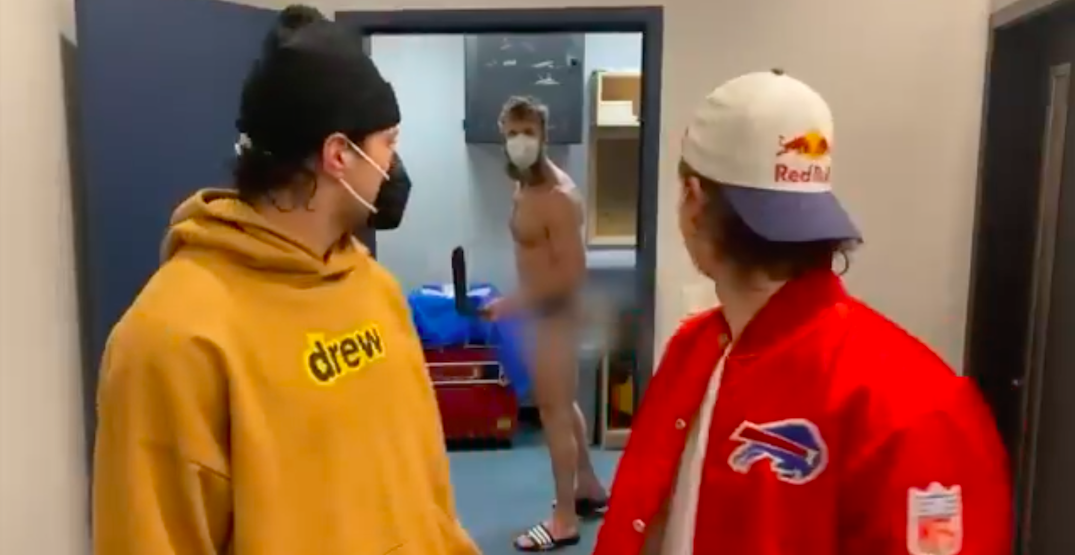 As Matthews and Marner honoured Marleau in the video message, Thornton emerges behind them wearing nothing but a mask on his face and flip-flops on his feet.

Marleau mentored both Matthews and Marner for two seasons in Toronto, while Thornton played with him for 13 seasons with the San Jose Sharks.

“Hey Patty, just want to congratulate you on amazing milestones and accomplishments,” Matthews says to start the video. “I know myself and Mitchie, a huge honour and privilege to get to know you and play with you for two years and build an amazing friendship.”

“We want to thank you for lending us Joe. He’s been a constant pro with us the whole time with us as well,” Marner adds, as Thornton enters the shot nude. “Another father figure. Want to congratulate you on this accomplishment and have fun with your family pal.”

Marleau played his 1,768th regular-season game Monday in Las Vegas, breaking Gordie Howe’s long-standing record. Over his career, the 41-year-old has made 1,596 appearances with the Sharks, 164 with the Toronto Maple Leafs, and eight with the Pittsburgh Penguins. During his 23-year NHL career, Marleau has 566 goals, 1,196 points, and three All-Star appearances.

“The emotional rollercoaster was definitely a long ride and I’m very grateful and blessed that I was able to do this with all the support I’ve had over my career. It’s something that I’ll never forget,” Marleau told reporters post-game.

“[I’m] extremely grateful for everything, and all the support everybody has given me throughout my career, and especially tonight,” Marleau added on the NBC broadcast. “It’s been overwhelmingly humbling, to say the least.”