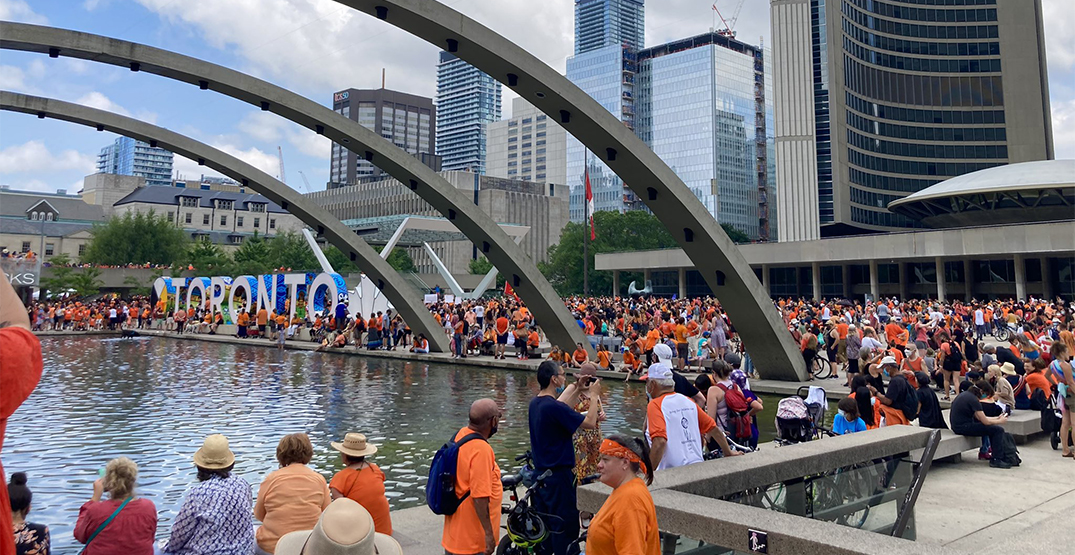 The demonstration coincided with other marches across the country supporting Indigenous communities after thousands of bodies were discovered in unmarked graves at former residential school sites last month.

The demonstrators chose Canada Day to protest the country’s colonial history and genocide against Indigenous peoples.

Hundreds of people wearing orange shirts attended a sit-in at Queen’s Park, walked through the streets, and gathered at Nathan Phillips Square, where some unfurled a banner that read “#EveryChildMatters.”

Our time in Toronto for a little gathering they were having. #everychildmatters #BringThemHome #IndigenousLivesMatter #Toronto pic.twitter.com/m5sYe4PhA6

Feeling like I can actually maybe make a difference. Had a meeting with my place of work about TRC and now I felt apart of my community again🧡 #TRC #everychildmatters #INDIGENOUS #BringThemHome #Toronto #tkaronto pic.twitter.com/rxHMlFnfRB

This evening’s vigil in #Toronto #Tkaronto was powerful and emotional. We had a minute of silence before drummers, singers, and dancers honoured the murdered #Indigenous children who were found as well as those who were still lost. #EveryChildMatters #TruthAndReconciliation pic.twitter.com/opErT4PlxF