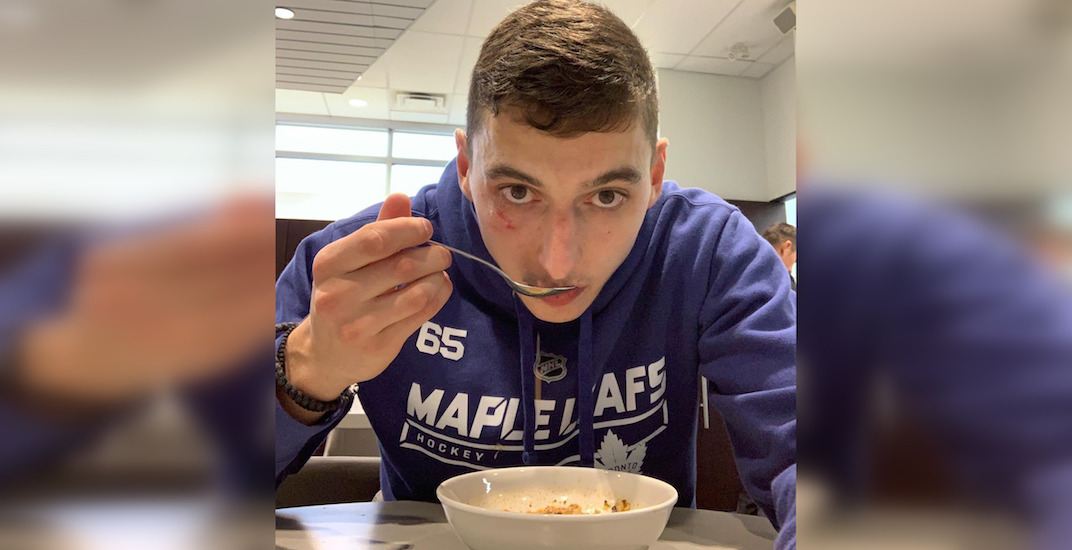 With a goal and an assist in his first NHL game, Ilya Mikheyev is off to a flying start with the Toronto Maple Leafs.

Ilya Mikheyev! What a play by Barrie. 5-2 Leafs. pic.twitter.com/AQnRmpfPxA

But the 24-year-old Russian, who made the move to North America from the KHL this offseason, is winning over fans for a different reason.

The man loves soup, and he doesn’t care who knows it.

In fact, he doesn’t understand why you don’t love soup as much as he does. Speaking with reporters after the Leafs’ 5-3 season opener over the Ottawa Senators, Mikheyev dropped this hilarious comment, transcribed by TSN’s Kristen Shilton:

Talked about the adjustments to being in Canada now: “I like soup. I don’t know why you don’t eat soup. My girlfriend cooks for me, so I’m very happy.”

Able to converse in English, but still learning the finer points of the language, Mikheyev says he’s learning with the help of Google Translate and by watching Netflix.

He says his favourite show to watch is Friends, which is somehow the perfect answer.

I am a proud member of the Ilya Mikheyev fan club pic.twitter.com/OU9qUCKsXy

Those quotes went viral, which sprung his opportunistic agent Dan Milstein into action with a pair of hilarious tweets:

Leafs fans can’t get enough of their new soup-loving winger, as the following proves:

There are only two types of people in this world.
Those who like soup, and those who don't.

When Ilya Mikheyev sees A Cup a Soup pic.twitter.com/ffoHuzC82o

Friendly reminder that long before Ilya Mikheyev we had Mats Sundin as our fearless soup ambassador pic.twitter.com/j44rBz0S0Z

10/10 would buy soup if Ilya Mikheyev endorses it.