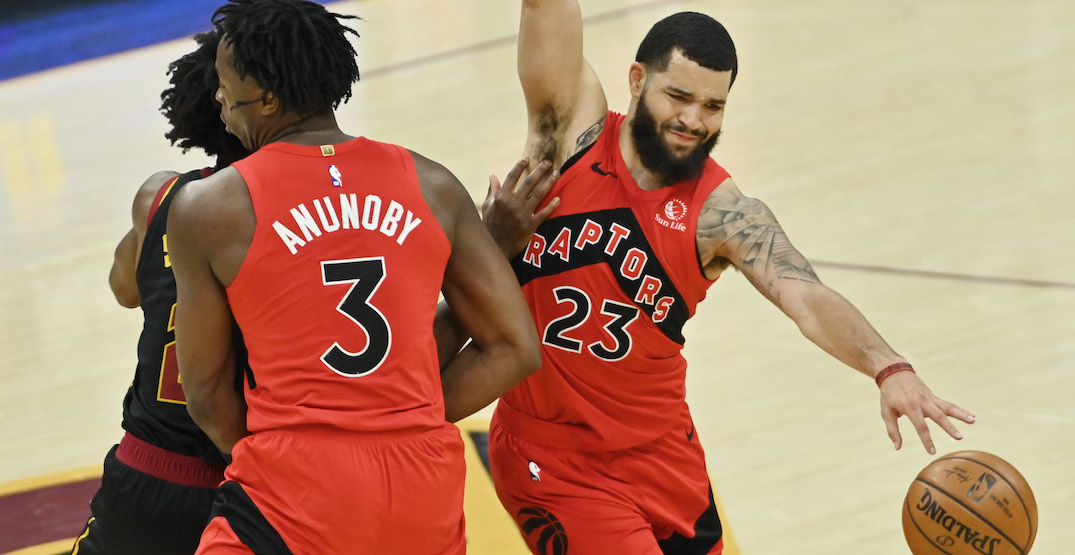 Toronto sports fans have been through a lot of highs in the last decade: the Jose Bautista Bat Flip in the 2015 ALDS and subsequent Blue Jays playoff runs, championships in the NBA, MLS, and CFL, and uh… some pretty fun regular season games from the Maple Leafs!

It’s the lows, though, that really bring the identity of what it’s like to cheer for the teams from the largest city in Canada, and after a pretty good run the last half-decade or so, the Raptors are finding out fast that 2021 is anything but their friend.

Currently on a nine-game losing skid after dropping a decision Monday night to break the Houston Rockets’ own losing skid of 20 games, the last few weeks have been enough to make any Raptors fan shut off the team’s games and find out just about anything else on TV to watch.

On Tuesday afternoon, news broke that the Raptors had fined star forward Pascal Siakam $50,000 for yelling at head coach Nick Nurse during Sunday’s loss to Cleveland… just two days after Nurse himself had been fined for tossing his mask during Saturday’s loss to Utah.

The Raptors have since said that the report is “not correct.”

In the grand scheme of things, whether the most recent report is true or not doesn’t change much for the Raptors: tensions are at an all-time high with this core roster, while morale has to be at an all-time low. And whether they’re public or not, arguments of some kind are bound to happen with any professional sports franchise that is in the spot that Toronto finds themselves in.

But how did they get here? And how should they try to fix it? Let’s take a deeper dive into what’s ailing the Raptors:

The worst thing about watching this Raptors’ collapse is as much as it’s been tied to a nine-game stretch, it’s been a confluence of factors over the last two calendar years that have taken the team from the NBA’s best outfit to a shadow of their former self.

In an alternate reality, the team is thriving as Kawhi Leonard is in the midst of an MVP campaign, while Serge Ibaka and Marc Gasol are controlling the paint as one of the league’s best front-courts.

But in the current season, it’s been an aging Aron Baynes struggling to fit into a starting role on a new team, combined with a five-game stretch where a number of key players, including Fred Van Vleet and Pascal Siakam, were missing due to COVID-19 protocols.

The most decimating factor to the Raptors’ on-court performance has been roster turnover , but the psychology behind being temporarily displaced for a season due to a global pandemic shouldn’t be discounted either.

Tampa isn’t the worst weather to find yourself in during normal times, but the Raptors are the only team in the league this season having to deal with not being able to play any games in their usual home arena.

How to fix it

As dreadful as portions of this season have been for the Raptors, they’re actually not really that far out of things if they can go on a run. FiveThirtyEight still gives the Raptors a 66% chance at reaching the playoffs, even if their chances of making the Finals are a measly 3%.

The most die-hard homer could tell you that this team as currently built isn’t a real contender, and it’s highly unlikely that a postseason run would end in anything but a disappointing dismantling at the hands of one of the East’s top teams.

With Thursday’s trade deadline fast approaching, their biggest question looms around Kyle Lowry, the franchise cornerstone who has been surrounded by various trade rumours for the better part of the season.

Norman Powell is also a name that’s been floated as a trade asset — but as a bench player for most of his career, he’s likely only bringing back a player of similar quality. A new Powell-type doesn’t push anybody from an 11th-seed to a contender.

Any major fixes, realistically, should be approached through the draft and free agency. The Raptors aren’t bad enough to tank for a top pick this season, and they aren’t good enough to contend for a title.

Meanwhile, VanVleet and Siakam are both with three years remaining on their contracts and still just hitting their stride in the league.

It may be enticing to tear it all down, but for now, the Raptors’ best path at getting out of the mud is just putting their head down and grinding through the rest of this ugly stretch until the shots start falling again, free agents become available, and they can go from being one of the NBA’s most southern teams to reclaiming their identity in The North once again.