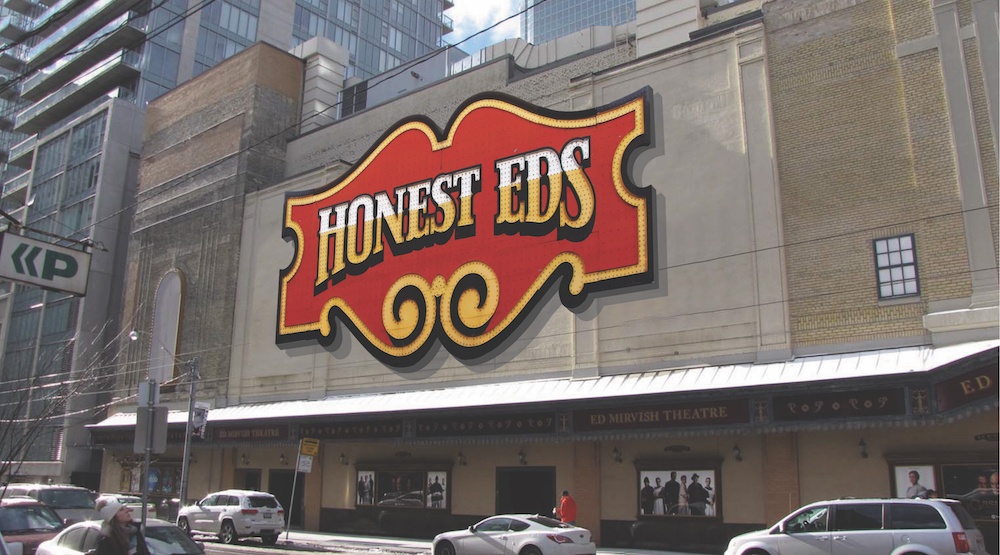 Honest Ed's sign is looking at a new home/Mirvish Productions

Everything will be different at 581 Bloor Street after May 23.

The iconic Honest Ed’s sign is being taken down on Tuesday morning, after the store itself shut its doors on December 31, 2016.

The world famous bargain shopping centre was a staple in Toronto, and its signs were part of its charm. That includes its ever-so-popular 23,000-bulb exterior sign, which lit up that Bloor and Bathurst intersection.

After the store closed, there has been a lot of interest to save this part of Toronto’s history. But this massive sign, which stretched from west to east from Markham to Bathurst, is not easy to move. But David Mirvish and the new property owners, Westbank, have found a way to preserve the sign, which is 30-foot-tall by 60-foot-wide. And its new home will be the Ed Mirvish Theatre in the Yonge and Dundas area.

The sign will be removed, and moved to a warehouse where it will be refurbished, then installed on the Victoria Street frontage of the Theatre.

“As well as Honest Ed’s, my father’s legacy is the theatre business he founded when he bought and saved from demolition the Royal Alexandra Theatre in 1963,” said David Mirvish in a release. “From that sole venue, our family’s chain of live theatres has grown to four venues in Toronto and participation in productions and presentations of hundreds of shows around the world. It is fitting that a sign from the original store that made it possible for my father to become involved in theatre will now grace the venue that is named for him.”

The installation of the Honest Ed’s sign at the Ed Mirvish Theatre still has to be approved by Toronto City Hall. Once approved, a timeline will be announced for its erection and unveiling.

“I’m sure he would be delighted to see two of his great passions — Honest Ed’s, which in many ways was a theatrical setting for a grand parade of humanity, and the theatre world, which he loved — finally be joined together,” said Mirvish.