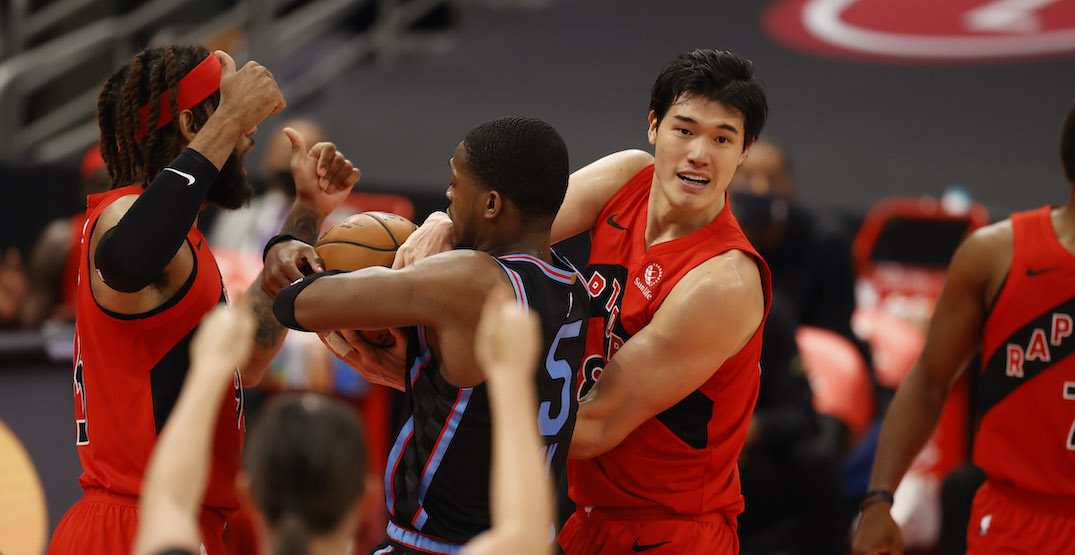 Yuta Watanabe is seizing the opportunity to show Toronto Raptors fans and the organization the reason why he is on the main roster.

The 26-year-old just put up back-to-back games of 10-plus points and in Sunday night’s contest against the Orlando Magic, he put up three blocks including a monster swat on Magic All-Star Nikola Vucevic.

HIS NAME IS YUTA WATANABE AND HE SAID NAW FAM pic.twitter.com/VgM5nKuDY0

However, it is not just his box score numbers that are keeping the Japanese forward on the court. The frantic pace that Watanabe plays with and his seemingly endless motor has enamoured Raptors players and coaching staff.

“He just doesn’t make many mistakes and he just keeps hustling,” head coach Nick Nurse said post-game. “I mean he’s pretty comfortable with the ball and stuff, but he’s just constantly in motion, which is really good.”

“The kid is playing so hard… He’s a guy that gives you maximum energy every time he’s on the floor,” Kyle Lowry said about Watanabe post-game against the Charlotte Hornets on January 14. “He’s going to give you everything he’s got… He just plays with an extreme hardness.”

Watanabe is a former member of the Memphis Grizzlies where he spent his first two years of his NBA career. He did not play very much, appearing in only 33 games, and served as a benchwarmer to give out high fives and motivation to his teammates. He wound up coming to the Raptors training camp this season and earned himself a two-way contract with the team.

Even to start this season, Watanabe was getting playing time very sparingly. Most games he would receive only single-digit minutes played and put up very little in terms of statistics. However, over the past five games, he is averaging 18 minutes per game and has gotten at least a steal or a block in four of the last five.

Watanabe has been facing an uphill climb, and he even admitted that at times during his NBA career he did not think he would get an opportunity like the one he has now. However, he is proud that the work he put in is starting to reap the rewards and wants to keep it going.

“I never knew I would get an opportunity like this,” Watanabe said. “In training camp I worked hard every day. I was able to show what I can do to coaches, the front office, and teammates, I got the two-way and now I’m getting the opportunity so I’m really proud of myself and what I’m doing right now.”

The Raptors next game is on Tuesday against the Orlando Magic. Tip-off is at 7 pm ET on Sportsnet.