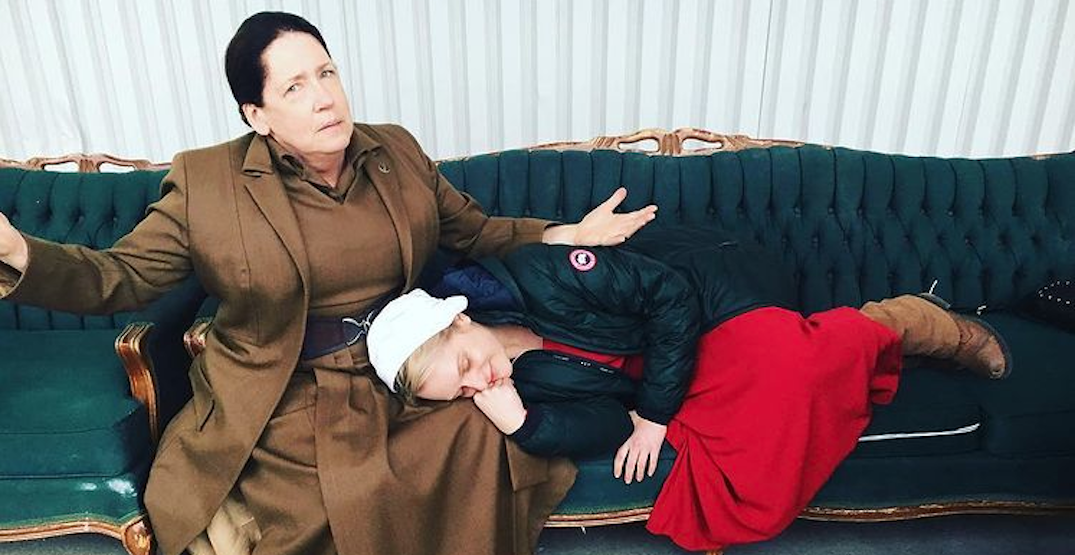 Most Ontarians know that the fictional, yet terrifying, country of Gilead from The Handmaid’s Tale is shot in different locations all over the province.

Well, the Handmaid’s Tale crew is currently back filming the fourth season of the show, and their iconic red cloaks have been spotted all over, with Toronto and Hamilton, in particular,  seeing a lot of filming action in the last week.

On Wednesday, March 3, a group of handmaids were spotted on a street in the Weston area of Toronto.

The show’s lead, Elizabeth Moss, was spotted in the area. She was wearing modern clothing, which could mean she was either directing (it was announced that she would take on a directing role this season), or she could have been filming a flashback scene.

Another interesting photo from filming today. Do we think Lizzie is producing or is she in costume as June?! #TheHandmaidsTale@TOFilming_EM 🎬🎥🤫👁 pic.twitter.com/A4oq7hVJR9

At the beginning of the season, Bledel’s character Emily escapes to Toronto. As she was recently spotted out and about filming in her handmaid costume, it’s likely a flashback scene was in production.

Alexis Bledel spotted on set today!
This is likely a flashback of some sort. 🔙🎬🎥 pic.twitter.com/5ZiOa8ZeG6

Parts of Hamilton were also transformed into the dystopian Gilead this week. Bradley Whitford, who plays Commander Joseph Lawrence, along with the show’s production crew were spotted on March 2 outside of the Hutch’s on the Beach diner.

Bradley Whitford spotted on set at the Beach yesterday. 👁🎬🎥
I love him! ❤️ pic.twitter.com/2rxkY3qFni

Gilead appears to have taken over Hutch’s on the Beach in Hamilton, Ontario today! https://t.co/i984HaPqsU

The City of Toronto announced on Wednesday that parts of Nathan Phillips Square and City Hall would be closed for filming this week.

Although the name of the show that would be filming there was not announced, these have been popular locations for The Handmaid’s Tale to film in the past, so Torontonians should keep their eyes peeled for any flocks of red cloaks taking over the square.