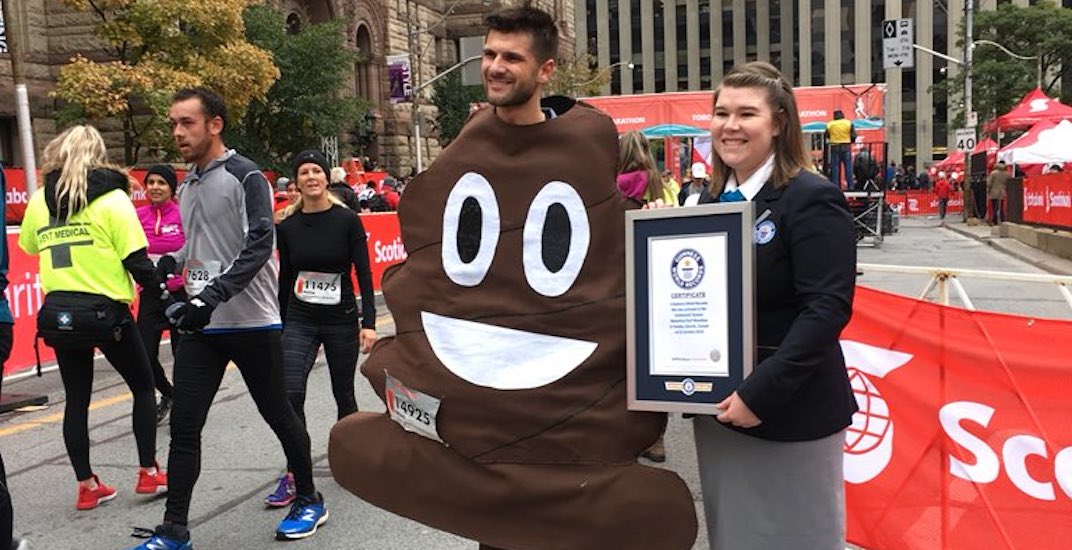 Kenya’s Benson Kipruto crossed the finish line first at the Scotiabank Toronto Waterfront Marathon, but he wasn’t the only winner on Sunday.

Competing in his first marathon, Black Creek, BC’s Cam Levins broke a 43-year-old Canadian men’s record, running the 42.2-kilometre race in a time of 2:09:25 – two minutes and one second behind Kipruto.

One of the most inspiring runs in Canadian running history. Thank you @CamLevins for wowing us at #STWM What a special experience! @scotiabank pic.twitter.com/0D9EUxDxQd

There were also 13 other, more hilarious records set.

With Guinness World Records officials on hand, new marks were set in a few I-can’t-believe-that’s-something-people-track categories.

First record holder at the #STWM?

Who loves video games?! We saw Yoshi take it up a notch at the #STWM earlier today👏🏼

You could say the crappiest record set was by Brad Vincent, who ran the fastest half-marathon dressed as an emoji.

What emoji would you try for this record?

No woman has ever ran a half-marathon faster than Julie Hills while pushing two double prams (that’s four children).

Julie Hillis achieved the fastest half marathon pushing TWO double prams (female) in a time of 2:05:01!

Calgary’s Blaine Penny set a new record for the fastest man to run a marathon dressed as a battery, completing the race in 2:59:58.

What a day for #MitochondrialDisease awareness at the #STWM with #TEAMMITO having 30+ runners on course and a new GWR for the ‘Fastest Marathon Dressed as a Battery’. Hundreds of thousands of more people now know our mitochondria are the batteries of our cells and people with #Mito are running on low battery power.

Chef Daniel Janetos is the fastest man to run a half-marathon dressed as a chef.

No more clowning around, it's time to CRUSH ANOTHER MF 🌍 RECORD 💪 @guinnessworldrecords it's on like Donkey Kong… . . . #guinness #worldrecord #fastest #chef #stwm2018 #running #nwrf

Other records broken include: