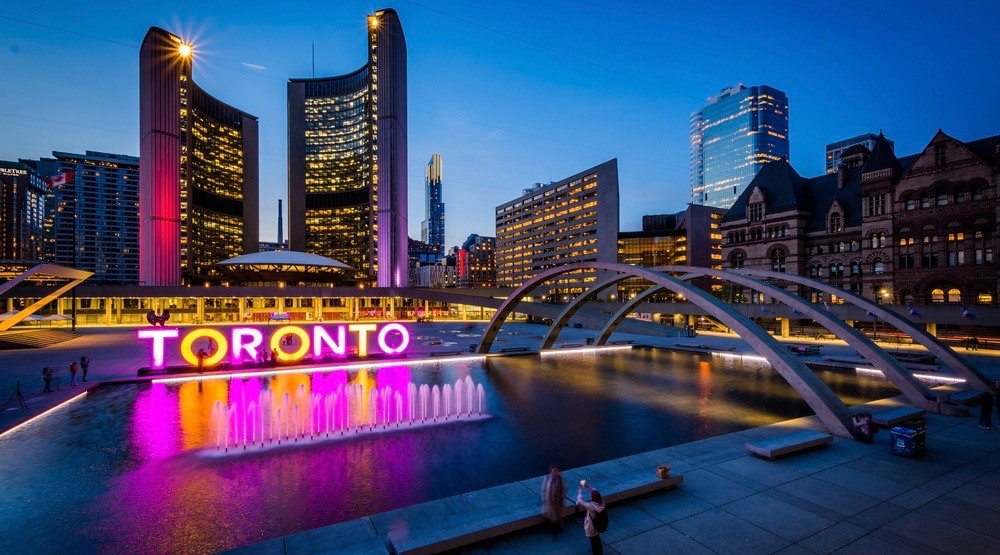 Take advantage of the remaining warm days of summer this month without breaking the bank.

Lighting of the CN Tower

What: This event commemorates the emancipation of the enslavement of Africans in North America and the Caribbean islands and pays homage to the historical fight for freedom.

What: On Tuesday nights, head downtown to the heart of Toronto for City Cinema. The outdoor screenings have limited seating, so be prepared and head down early.

What: The annual outdoor summer screening series takes place on Wednesday evenings. The screenings are free, and snacks will be available for sale with proceeds going towards the Regent Park Film Festival. Bring a blanket and get ready for some activities before each film.

What: Head east to The Beach Village for Movie Nights in the Park every Wednesday in July and August! This movie experience will take place in a number of beautiful parks (screenings will rotate between Kew Gardens and Ivan Forrest Gardens Park). Did we mention there’s FREE popcorn?

What: Humpdays in the city are always a little sweeter with Free Flicks. This summer, the popular Harbourfront series will be running until the end of August and features inspiring and fun films. The free event takes place at 9 pm.

What: This festival celebrates all things Filipino, and features vibrant and contemporary arts, culture, fashion, and food.

What: The popular outdoor movie night program is celebrating Canada 150 this summer. The event at Downsview Park will be screening films with a Canadian connection and this months’ lineup includes La La Land, Moana, Lego Batman, and Beauty and the Beast.

What: Friends, kids, pets are all welcome to this park turned foodie haven in mid-August. Admission is free for the weekend of outdoor eating, plus there will be a beer garden, children’s village, beer garden, and stage showcasing live entertainment.

What: The annual T&T Waterfront Night Market is back for another exciting run and attendees can expect the awesome outdoor culinary experience along with all the night market awesomeness at a brand new venue.

What: One of Toronto’s most famous summer events, The Krinos Taste of the Danforth is Canada’s largest street Festival and is back for its 24th year with plenty of Greek-style eats at this massive street festival.

What: CityPlace Fort York BIA will be hosting a free movie night once a month up until September.  Gather up your friends, bring your blankets/chairs and come a little early to enjoy snacks/refreshments. This months’ movie stars Canadian actor and comedian Jim Carrey in Ace Ventura Pet Detective.

What: Kothu Fest celebrates the famous Sri-Lankan street dish in Toronto when it returns for its third year to Albert Campbell Square at Scarborough Civic Centre in this month. Kothu roti is a staple of Sri Lankan cuisine comprising shredded roti (flatbread), spiced vegetables, eggs and/or meats, and curried gravy, and is cooked and chopped over a flat metal plate that results in a “cacophony of rhythmic sound, sight, and smell.”

What: We really are a city all about food. The fifth annual Pan American Food Festival showcases the best food products while celebrating the cultural diversity of the Americas.

Where: Yonge-Dundas Square
When: August 12 to 13

What: Toronto’s St. Lawrence Market will be hosting an afternoon of free family fun at St. James Park. Attractions include healthy snacks, smoothie-making by bicycle, activities, and entertainment.

What: Sail-In Cinema is coming back to Toronto this summer for its seventh year. And as Sugar Beach will once again turn into the largest outdoor theatre in Toronto this August, you’ll be able to participate from both the shore and the open water thanks to the only duel-sided floating movie screen in the world!

What: ITALFEST celebrates all that is Italian. Featuring delicious food and crafts from 40+ vendors and artisans, cultural and family-oriented activities, entertainment from local and international talent, a thriving “marketo” and much more, the festival spotlights a community rich in heritage, entertainment and family values.

What: Come and check out upcoming Canadian talent in hip-hop and dance music. This event will feature free shows from artists like Austra, Dead Obies and Rae Spoon.

What: Join thousands of Torontonians at Canoe Landing Park for an all-day celebration of local music, art, and community this month.

What: The 96th Warriors’ Day Parade honouring the Toronto Garrison will take place on August 19. The event recognizes those who served and those serving today.

What: Open Streets TO is the city’s largest free recreation program, unlike any other in the country. Certain city streets will temporarily open to people and close to cars and the streets will become “paved parks” where people of all ages, abilities, and social, economic, and ethnic backgrounds can come out and improve their health.

What: Toronto’s bustling Annex neighbourhood, will be showing off its artistic side with a day and night of live art creating, performances, dance, music, food and drinks.

What: What began in 1990 as a way to introduce Taiwanese composers to the Canadian public is now an annual festival. This year’s theme is Kan Pai Japan.

Where: Harbourfront Centre, 235 Queens Quay West
When: August 25 to 27

What: Similar to Thanksgiving, this festival celebrates the fall harvest. The Korean community will be coming together to share Korean culture, with k-pop and dance competitions, traditional fan dancing, bands, and numerous booths for both traditional and modern Korean cuisine and accessories.

What: The Friends of Sorauren Park have planned another season of outdoor movies and special events this summer. The family event takes place on the fourth Saturday of every month and this month’s feature will be Disney’s Jungle Book.

Where: Kensington Market
When: August 27

What: Halo Halo is the sweet inspiration behind this Toronto food fest happening this month. Like the sweet treat itself, the Filipino food festival promises a colourful array of arts, culture, entertainment, and of course, edibles. Attendees can look forward to everything from adobo and pancit, to lechon and lumpia on offer along with traditional folk music, dances, and kid friendly activities.