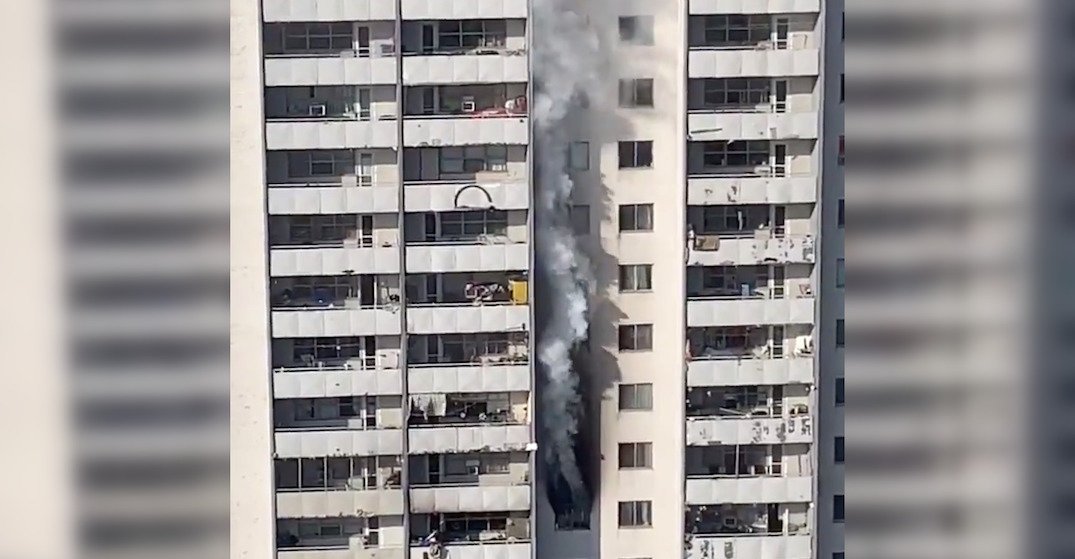 Multiple people were treated for injuries after a four-alarm fire tore through a condo high-rise in Toronto’s east end on Friday morning.

The fire, which broke out on a middle floor of a tower at 200 Wellesley Street in the city’s St. James Town neighbourhood just before 9 am, sent thick clouds of smoke shooting out of one of the tower’s windows.

200 Wellesley is on fire. The amount of major fires in St James Town is truly insane — I don’t even know what number this is in the past 18 months. pic.twitter.com/0Aw9TIMcdk

The Toronto Professional Fire Fighters’ Association (TPFFA) said that as a result of the four-alarm fire, multiple patients were treated for injuries.

“Our thoughts are with the injured and their loved ones,” said TPFFA.

In a tweet, Fire Chief Matthew Pegg said the blaze was knocked down quickly and the fire was downgraded to a three-alarm as heavy smoke continues to linger in the building.

@Toronto_Fire crews have knocked down the fire at 200 Wellesley Street East. A 3rd alarm has been assigned to assist with removing smoke from the building, which is ongoing.

However, this isn’t the first time a fire has broken out at 200 Wellesley Street.

In 2010, an intense six-alarm fire ripped through the building. More than a thousand residents were evacuated and left temporarily without homes.