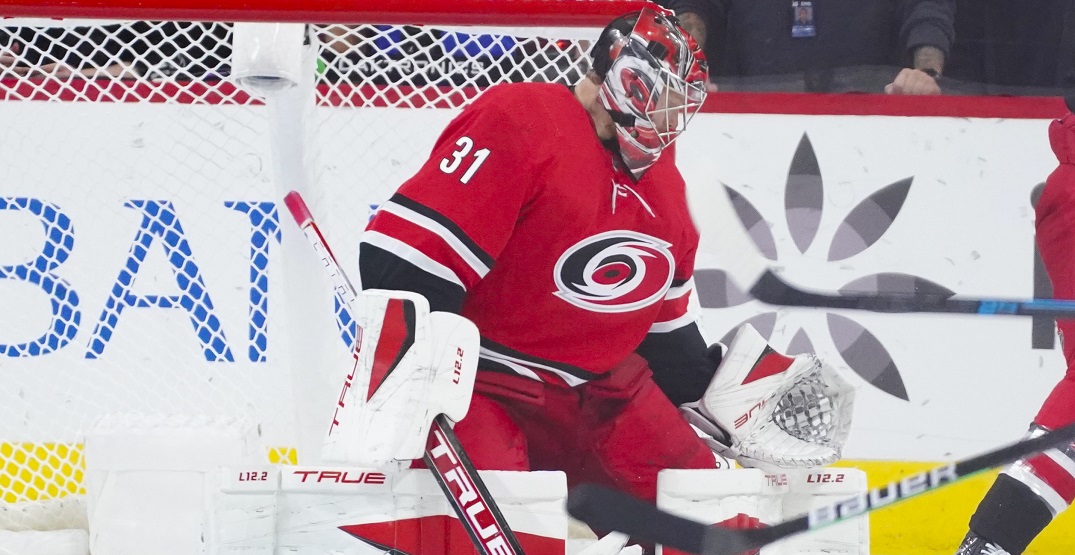 Facing off against his former team, the 32-year old Danish netminder is in the starter’s net for Carolina against the Toronto Maple Leafs on Monday evening in Raleigh.

Andersen left the Leafs this summer in free agency, with early returns of the two-year, $9 million deal working out great for his new team.

Andersen has put up wins in all four of Carolina’s games to begin the season, sporting a nifty .944 save percentage to start the year.

Frederik Andersen was initially drafted by the Hurricanes in 2010, though he never signed with the organization and re-entered the draft in 2012, being picked up by the Anaheim Ducks.

But after starting upwards of 60 games in each of his first three years in Toronto, injury troubles plagued Andersen in his final two seasons with the Leafs.

“It was tough seeing him leave, but he’s done a great job over there,” Leafs forward Mitch Marner told reporters. “He was a big part of my journey here in Toronto. For the first five years there, he was a big part of helping me out, getting me involved and making me feel comfortable and part of this team.”

In Toronto this season, things have been, well, the opposite of Andersen’s start. The Leafs are in the midst of a three-game losing streak, with former Hurricanes goalie Petr Mrazek still recovering from a groin injury suffered in the first week of the season.

Jack Campbell, who ended up winning the starter’s net from Andersen last season following the latter’s injury troubles, was lit up for five goals on 21 shots in an eventual 7-1 loss to Pittsburgh this past Saturday.

But Monday gives Toronto a chance to start anew. There will actually be a bit of a local legend in the arena, as former Canes emergency backup goaltender David Ayres who infamously beat the Leafs will be in Raleigh to take in the game.

If there are any jitters from Toronto about facing Andersen, they’re not showing it. Leafs forward Auston Matthews hung out with Andersen last night, taking in the Sunday Night Football matchup.

Frederik Andersen and Auston Matthews had dinner and watched football together last night. They face off tonight.

Puck drop is set for 7 pm, with the game being broadcast on Sportsnet.