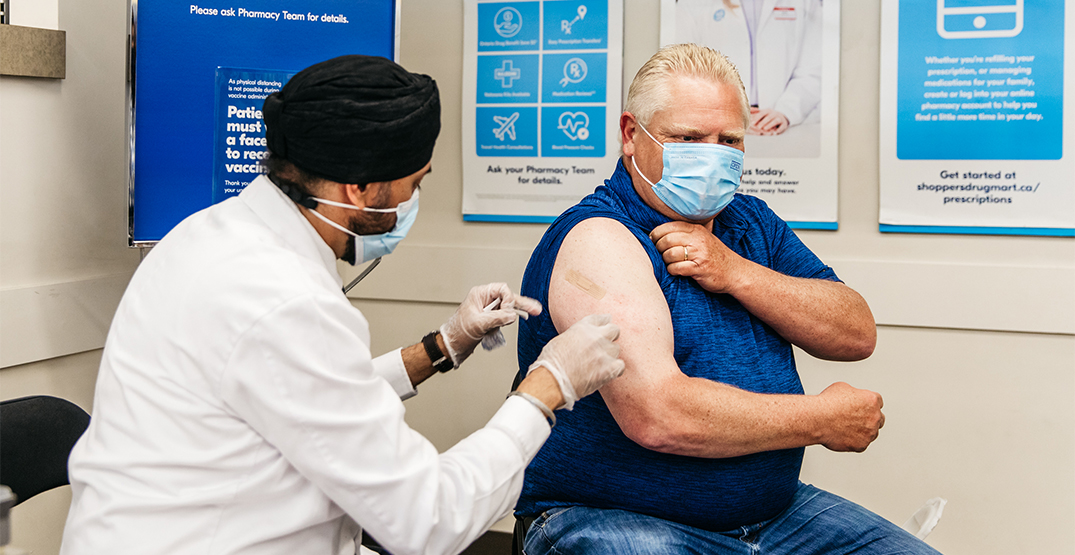 Doug Ford gets his second shot of COVID-19 vaccine at a Rexdale pharmacy. (@fordnation/twitter)

Premier Doug Ford rolled up his sleeve for a second dose of AstraZeneca COVID-19 vaccine at a Toronto pharmacy Thursday afternoon.

He got the shot at a Shoppers Drug Mart in Rexdale, after receiving his first dose of AstraZeneca on April 9.

Today, I received my second shot of the @AstraZeneca vaccine. I want to thank our amazing frontline health care workers for working tirelessly to get vaccines into arms.

If you haven’t already signed up to receive your vaccine, please do so today!https://t.co/ud58wBPk5h pic.twitter.com/KrSsHQJpw4

He echoed top doctors’ sentiments that immunization is the most important tool to get to a more normal post-pandemic situation.

“I’m not going to stop working until we get everyone vaccinated. We’ve got to get every single business open and the economy booming again,” he said.

AstraZeneca recipients, including Ford, have the option of completing an AstraZeneca regiment or choosing an mRNA shot for their second dose.

The National Advisory Council on Immunization updated its recommendations on June 17 to suggest people who got one dose of AstraZeneca get a second shot of an mRNA vaccine. Their rationale was to avoid rare but dangerous blood clots known as VITT that can happen after inoculation with AstraZeneca, and because research suggests mixing AstraZeneca with an mRNA shot produces a slightly stronger immune response.

But getting an AstraZeneca shot in Toronto is easier than waiting in a virtual or physical line for an mRNA shot, and it appears Ford chose the product he could get sooner.

Health officials have thanked people who chose to get immunized with AstraZeneca sooner, saying they made a good choice to protect themselves and loved ones from a COVID-19 infection.

Ford’s second shot happened on the same day his government announced Ontario would move into Step 2 of its reopening plan two days ahead of schedule. The province will enter Step 2 on June 30, when hair salons and amusement parks will reopen.

A minimum of 21 days must pass before the province proceeds to Step 3.