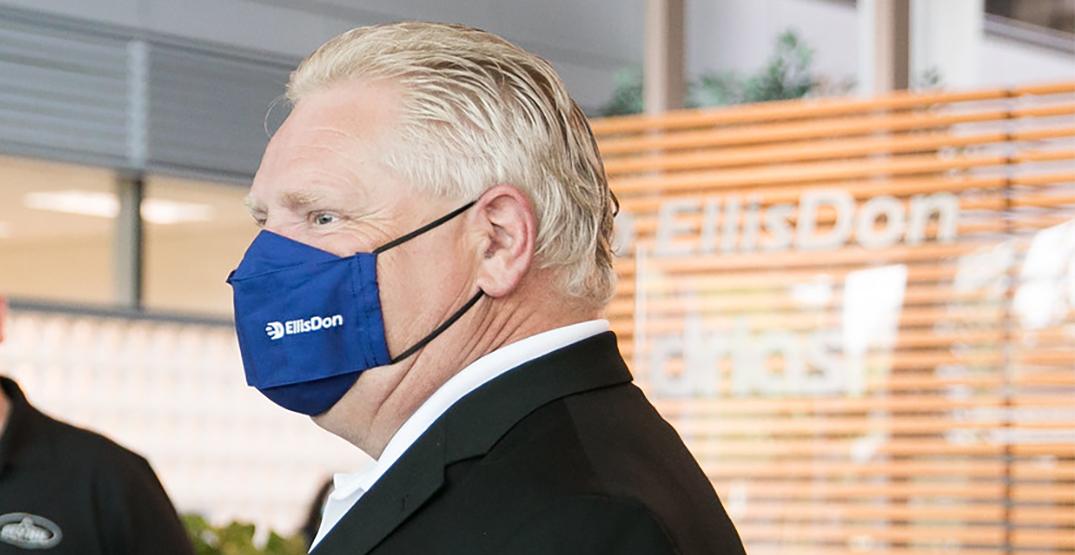 Premier Doug Ford has written a letter to doctors, healthcare organizations, and education experts asking for their opinions on whether it’s safe to reopen Ontario’s schools.

The letter was sent to nearly 50 organizations and individuals, including chief medical officers for many of the province’s health authorities. It asked for feedback on several questions by 5 pm on Friday.

“In recent weeks, there has been a wide range of advice and commentary around the reopening of schools in Ontario. There is consensus in some quarters on how, when, and whether schools should reopen, and diverse and conflicting views in others,” Ford wrote.

“Keeping children safe is our foremost consideration, which is why as experts in health, public health, and education we are seeking your perspective.”

Ford is seeking input on whether one dose for teachers is sufficient, whether in-class learning should be considered an indoor gathering under the reopening framework, and how much of a threat is posed by the B.1.617 variant first discovered in India.

Ford also shared COVAX system data that suggests less than half (41%) of teachers and other education workers have received a first dose compared to 62% of the general population.

On the other hand, Ford mentioned how cancelled classes present mental health, academic, and other challenges for students, amplified for children who come from poor families or who experience racism.

Schools have been closed since early April, but the latest modelling from the COVID-19 Science Advisory Table suggests students could go back to class as early as June 2 and trigger a 6% to 11% increase in cases. Dr. Steini Brown, co-chair of the Science Table, called that bump “manageable.”

Dr. David Williams, Ontario’s chief medical officer of health, has also said he wants students back in school as soon as possible. Ideally, he wants in-person classes to resume before Ontario opens non-essential retail and restaurant patios on June 14.

But other health officials aren’t as keen. During a news conference Wednesday, Toronto’s medical officer of health, Dr. Eileen de Villa, wouldn’t say the city’s schools are ready to reopen.

A spokesperson for the premier’s Office provided a copy of Ford’s letter to Daily Hive but did not answer questions about why the government is pursuing advice on opening schools so publicly instead of relying on its Science Table for expertise.

The spokesperson also did not say why experts were given such a tight timeline to provide their thoughts. 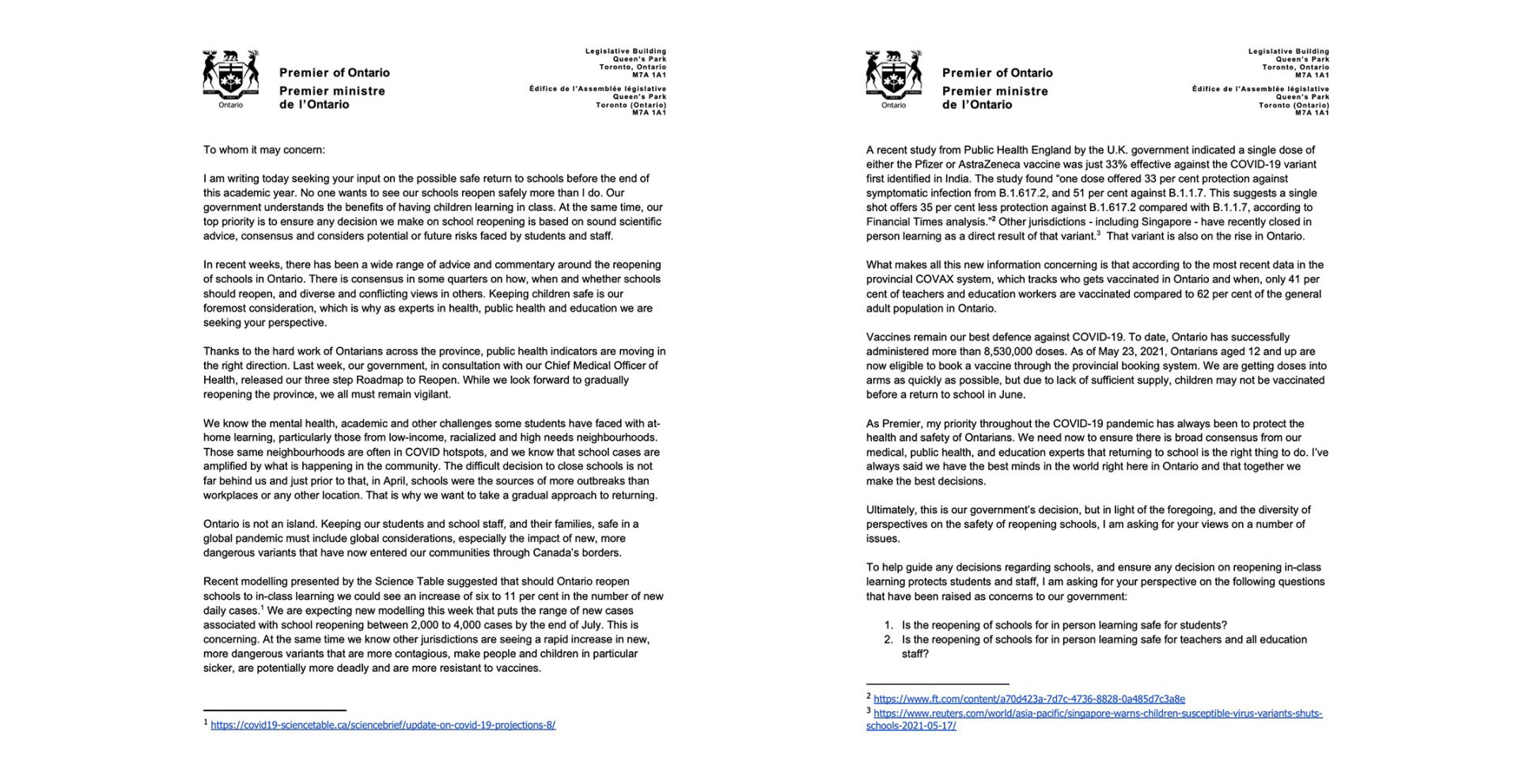 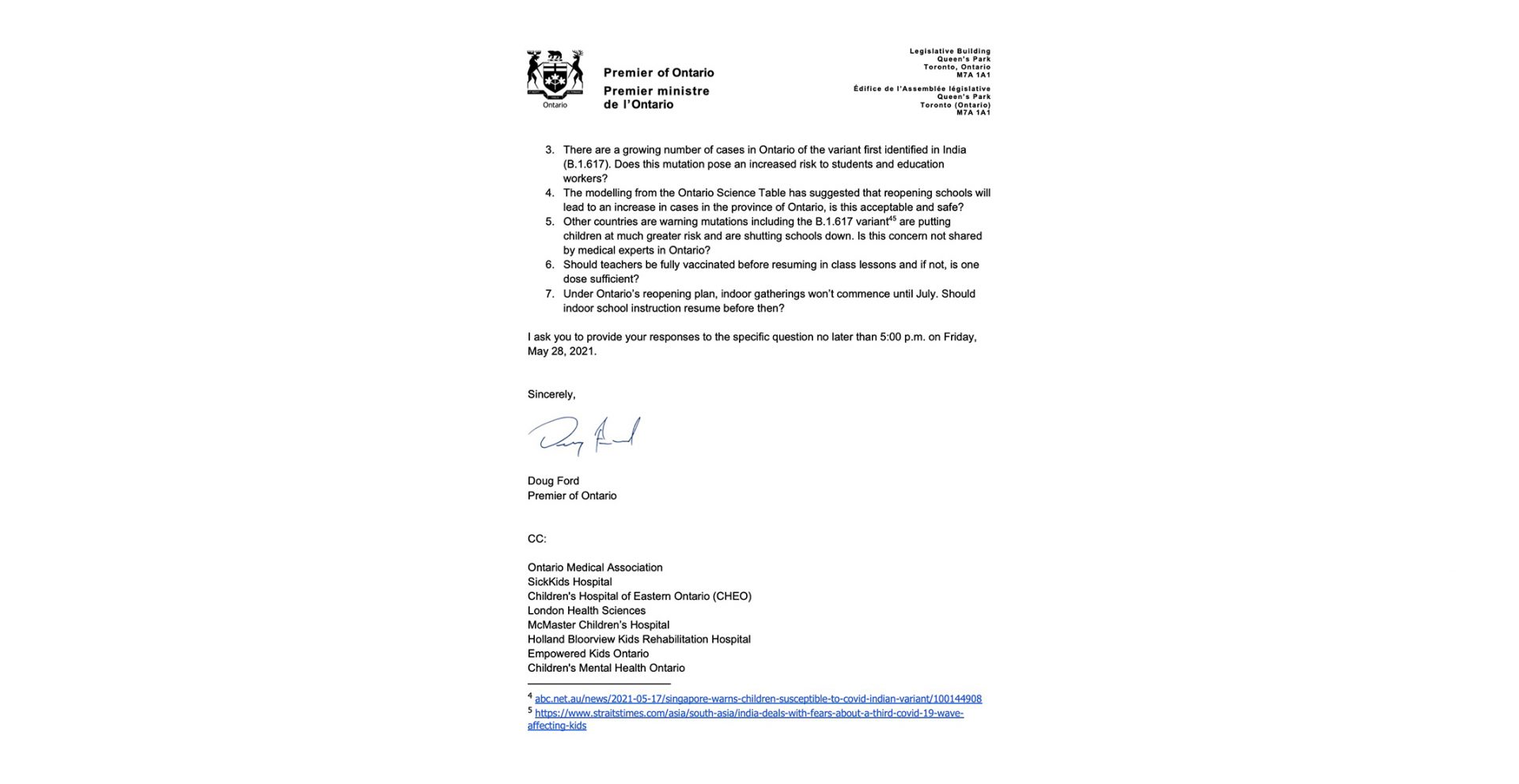