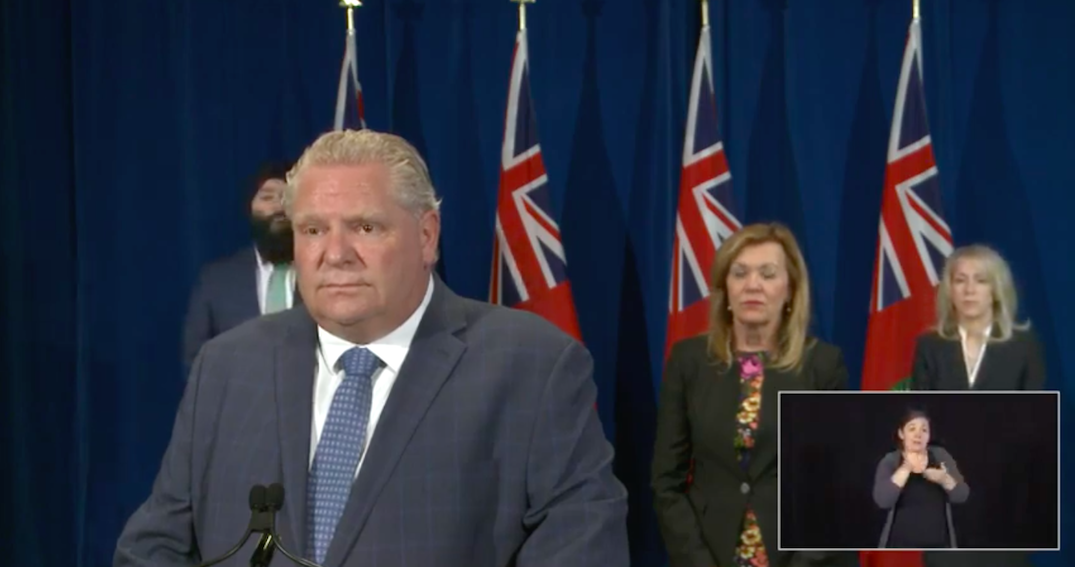 Ontario Premier Doug Ford said he is “disappointed” with the thousands of Toronto residents that gathered in Trinity Bellwoods Park on Saturday, telling them to get tested for COVID-19.

On Monday, Ford said “do us all a favour and get tested now.”

He added that anyone in large gatherings, like those seen at the park in Toronto should go and get tested for the virus.

“That’s what I would recommend.”

The premier added that “hopefully this will not happen again” and urged the park-goers to think of their families before gathering in large crowds.

“These are smart young people. Weren’t they thinking of their family when they went there?”

However, Ford said that the incident on Saturday does not reflect on the entire city.

“Around 99.9% of the people are phenomenal,” Ford said. “An odd group that misbehaves does not reflect the City of Toronto. They’ve been great.”

When asked if Mayor John Tory should get tested — he was seen at the park not physically distancing and talking to residents with his face mask down — Ford said that decision is up to the mayor.

“He’s been working hard day in and day out. He’s working his back off,” Ford responded.

In order to ramp up testing across the province, the premier said over the weekend his government started a “robust” testing program in the community.

He noted that there has been testing of more hospital workers, and is encouraging the 141 public hospitals and four private ones to test their staff.

Ford added that there has been increased testing of inmates and workers at correctional facilities.

“If you have symptoms, or worried if you were in contact with large groups like ones at Trinity Bellwoods, or been on contact with someone who might have gotten COVID, go and get tested.”

Ford said that whatever the government or public health implement cannot be done without the support of the people.

The province is also beginning to go into community hot spots and advocate for testing in workplaces that have many employees.

“We’ll be launching a robust public awareness campaign to get those daily testing numbers up. It will take time to fully ramp up the testing strategy. But I’m confident we’ll get there soon,” Ford said.

There were 8,170 tests completed in Ontario, which is lower than the 11,383 tests completed from Sunday’s report — the goal was to have over 16,000 tests done daily at the start of May.

The premier also said that the hot spots are measured by case numbers according to postal codes with parts of Peel Region, Toronto, and Windsor-Essex acting as areas of focus.

“We need to drive the testing where the hotspots are, it’s absolutely critical. We need to test asymptomatic and symptomatic people. That’s how we have to get a handle on this.”

Ford noted that the province has a “strong plan” in place moving forward.

On Monday, the premier also announced that Ontario’s volunteers and small businesses are rising to the challenge and helping seniors and other vulnerable people during the pandemic.

On April 9, the government announced it was investing $100,000 in its partnership with SPARK Ontario to support the province’s first bilingual volunteer hub connecting volunteers with community organizations that support vulnerable Ontarians.

According to the province, more than 500 meal referrals and nearly 2,000 essential supply referrals have been made since the program launched in mid-April.