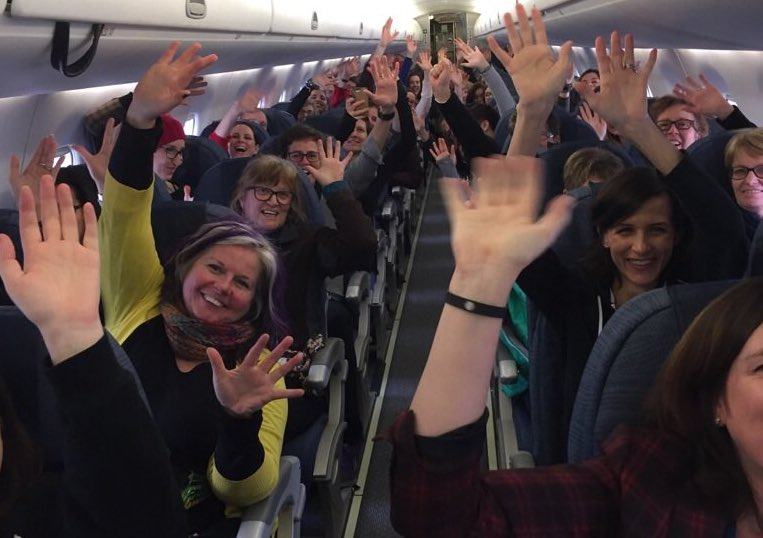 As Donald Trump’s inauguration took place on the morning of January 20, a plane full of Toronto women was headed to Washington.

A Toronto Twitter user’s photo has now gone viral, showing plane cabin that she said was 90 per cent full of women heading to the massive Women’s March on Washington, which takes place on January 21.

Andrea Addario first tweeted that 75 per cent of the flight was heading to the march.

Boarding plane. Woman on plane says “anyone here going to the March?” 75% of plane: “YES!!” #WomensMarchOnWashington

She later corrected the number, and posted a photo from the flight, in a tweet that has gone viral.

According to Tara Kriese, it was Air Canada flight 7616 to DC.

Air Canada flight 7616 from Toronto to DCA is filled with Canadian women in route to the #WomensMarchOnWashington 💪🏻 pic.twitter.com/n6CMKIOU51

Other Twitter users have posted about the flight as well.

All of them plus more are on my flight to D.C. #planefullofnastywomen pic.twitter.com/UUg9m4j0xo

our flight is 90% marchers. D.C. better watch out. #WomensMarchOnWashington pic.twitter.com/dm6nn08EXo

But it wasn’t just Torontonians making the trek to Washington. According to several Twitter accounts, there were US flights heading to the march destination, with a majority female presence.

The March on Washington is taking place in different cities this weekend, including right here in Toronto.