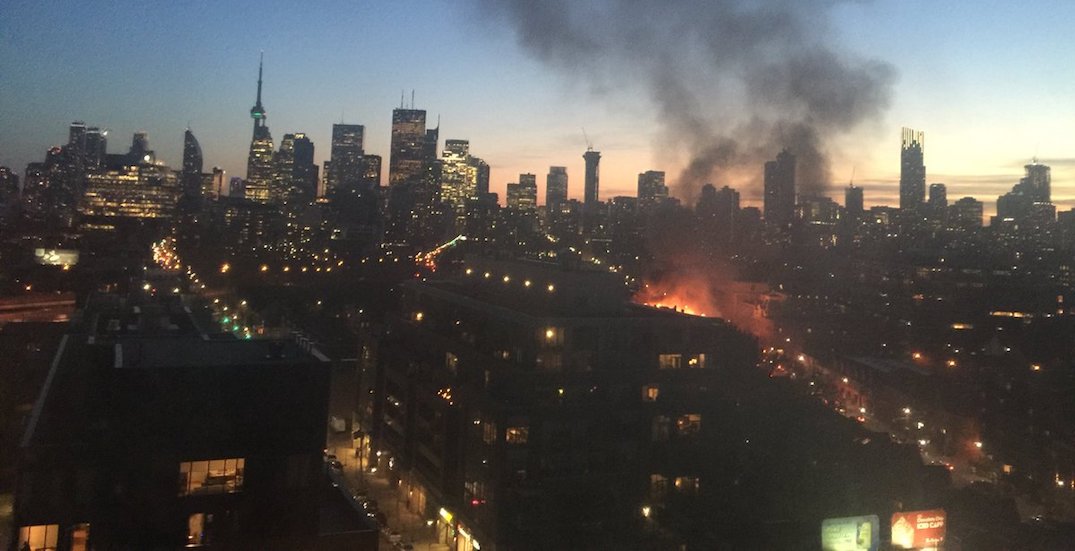 A fire fighter was injured on Thursday night as crews battled a 3-alarm blaze in Toronto’s east end.

According to Toronto Fire Services, a two-storey townhouse on Queen Street East and Sumach Street had visible heavy smoke and flames upon arrival around 8:30 pm.

The fire was initially a 2-alarm blaze, but was later upgraded to a 3rd alarm. Several firetrucks were on the scene, and streets surrounding the fire were closed for the evening.

One firefighter sustained a leg injury, but no other injuries were reported.

@Toronto_Fire has declared the Queen Street fire under control. Our fire Investigations team is on scene and is beginning to interview witnesses and commence the preliminary scene examination. Our crews and investigators will be on scene overnight.

Fire chief Matthew Pegg said the fire was under control just before midnight, and indicated that investigators would be on the scene overnight.

At this time, it’s not known how many residents have been affected by the fire. All streets have since reopened.

There is heavy smoke in the area of Queen Street and Sumach. Please stay clear of this area and keep windows closed if you live in the area @Toronto_Fire pic.twitter.com/2xT8DLmTYG

Thankfully there were more major injuries during this fire by Queen St and Sumach. #torontofire pic.twitter.com/n8POLJIkqX