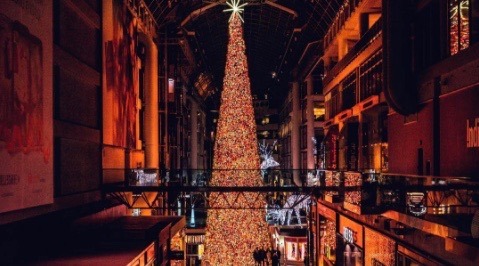 Christmas is all about family.

And the good news is, Santa is in town.

So besides having Home Alone on repeat with the kids, check out these family-friendly holiday events in Toronto this month!

Toronto’s Christmas Market brings the spirit of the season to life! One of Toronto’s favourite holiday events, enjoy the magic of Christmas, traditional music and dance performances, and activities for the whole family to enjoy. If you haven’t checked it out yet, make sure to head down soon.

Soulpepper’s beloved production of A Christmas Carol has become a Toronto holiday tradition, and it’s fun for the whole fam. Follow Ebenezer Scrooge as he is visited by three ghosts who help him understand the importance of charity in the holiday season.

Where: Young Centre for the Performing Arts, 55 Mill Street
When: Now until December 24

Where: Nathan Phillips Square, 100 Queen St West
When: December 8 to 23

Over 60 vendors, entertainment, and Christmas cheer awaits your family at Harbourfront Centre! And bring your family’s skates for one of the DJ skating nights.

Where: Harbourfront Centre, 235 Queens Quay West
When: December 9 and 18

This holiday season, take the kids to join Santa for breakfast under the sea. Ripley’s Aquarium of Canada will be hosting a mouth-watering breakfast with Jolly Old Saint Nicholas. Tickets include: breakfast, complimentary coat check, a family photo with Santa, general admission to the aquarium, and a gift for your child to take home.

Ever since its premiere in St. Petersburg in 1892, The Nutcracker has been an integral and irreplaceable part of Christmas celebrations worldwide and a work of theatrical exuberance synonymous with the unfettered joys of childhood wonderment.

Where: Four Seasons Centre for the Performing Arts, 145 Queen Street West
When: December 10 to 31

Celebrate the holiday season at the City of Toronto’s annual Christmas Concert. Beginning at 11:30 am, the concert will feature local choirs: All the King’s Voices, Toronto Beaches Children’s Chorus and Toronto Mass Choir. As always, Santa Claus will make a special guest appearance.

Explore the Magic of Casa Loma with the kids.. at night!  Wander through the dazzling lighting display in the gardens and witness famed illusionist entertainer Professor Wick’s holiday themed magic show, as well as live performers Soli and Rob and Circus Jon. Visit with wintery holiday mascots, sing along with live carollers, witness live wood carving, enjoy s’mores, hot cocoa and much more!