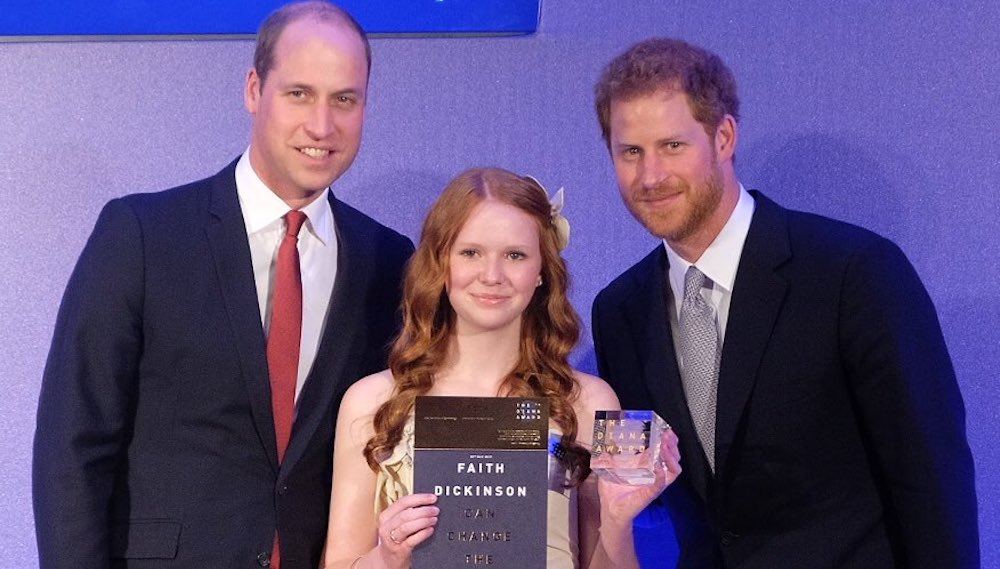 The Ontario native began the charity after her aunt was diagnosed with breast cancer. During her aunt’s treatment, she told Faith that she had very cold spells. In return, Faith made a fleece blanket to comfort her aunt.

Since then, Faith has made over 3000 blankets, which have been sent across Canada, the United States, UK, Germany, Brazil, Australia, France and Africa, and has raised over $30,000 to ensure that the blankets remain free to those who need them the most.

And Faith’s work has not gone unnoticed. The young Ontarian was one of 20 youth recipients of the inaugural Diana Award in London this week.

Presented by Prince William and Prince Harry, the “Diana Award was set up in memory of Diana, Princess of Wales, and her belief that young people have the power to change the world for the better. It is committed to fostering, inspiring and developing positive change in the lives of young people through practical social action.”

The Inaugural Legacy Award recognises young people who have carried out inspiring work without expecting a reward. pic.twitter.com/HfjpkT6zqr

“This ceremony is about two things; celebrating young people for their selfless contribution to society, their courage and bravery, sometimes in the face of adversity and demonstrating to young people that we, as a collective, value them,” said Tessy Ojo, Chief Executive, The Diana Award. “At The Diana Award we understand that valuing young people also means investing in them so we are delighted that these Legacy Award recipients will have access to our unique development programme that ensures they continue to be positive trailblazers for their generation.”

And young Faith has demonstrated that over the years. Cuddles for Cancer, which is based in Lakefield, ON not only provides warmth and support, it personalizes each blanket based on the recipient’s hobbies or favourite colour.

According to the Diana Award, recently her blankets have served soldiers returning home injured or suffering from PTSD.