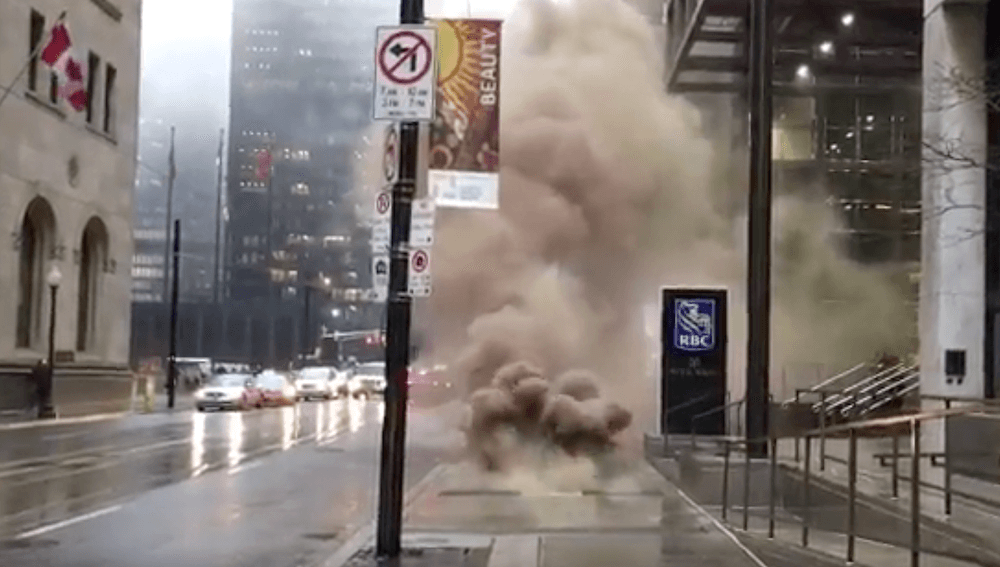 UPDATE – 6:08 pm: The explosion is being investigated as a hydro issue, according to police.

No injuries have been reported after an explosion was heard at King and Yonge just after 5 pm on Monday.

Police say that lots of smoke was seen coming from the sewer gate, and that there were reports of a loud explosive sound came from underground.

Multiple police and fire department vehicles are at the scene. Police are asking people to avoid the area for the time being.

Twitter users have shared videos of the incident online, showing the smoke emerging in the area.

.@CBCNews I swear in this one.
This was 20 seconds after first explosion. I had just walked across those grates. pic.twitter.com/MoJj4Aa10w

@plutoisnumber9 @CBCNews My daughter filmed this as she was driving by in a cab pic.twitter.com/uk6frxAy3c

Something is happening at #bay and #queen in #toronto. Loud noises and tons of smoke. Crews on scene now. pic.twitter.com/bUr68Ihxal

Black smoke, sound of explosions outside RBC building at King and Bay pic.twitter.com/LCdNOR8FUm

TTC streetcars have been diverted and King Station is also being bypassed by subways.

Subway service is bypassing King Station both ways, on Line 1, due to a police/fire investigation at street level.#TTC

504 King/514 Cherry diverting EB via Spadina/Queen/Church & WB via Church/Richmond/Victoria due to a road closure at King and Yonge. #TTC

More to come as the story develops.