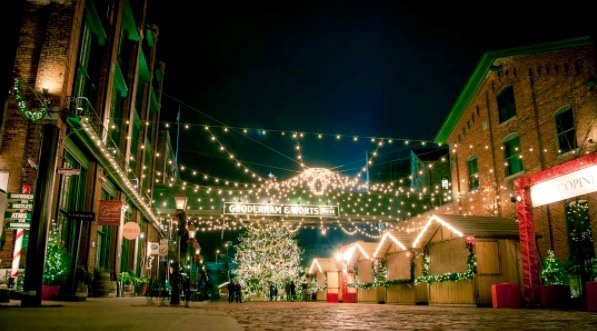 ‘Tis the season for events and festivities, Toronto!

There are a lot of markets, plays, and shows to choose from this month. So get that events calendar out, and start planning your December.

Have a great – and hopefully not too cold – month ahead!

What: A beautiful new re-telling of J.M. Barrie’s beloved story, Bad Hats Theatre’s production of Peter Pan soars to new heights in a remount playing in Toronto at different breweries this month.
Where: Various Toronto breweries
When: December 2 to 10

What: The Second City’s Twist Your Dickens, an irreverent and interactive seasonal satire, will haunt the Toronto Centre for the Arts this month. Created with The Second City Theatricals in Chicago, Twist Your Dickens is written by former The Colbert Report writers Peter Gwinn and Bobby Mort.
Where: Toronto Centre for the Arts, 5040 Yonge Street
When: December 2 to 30

What: Toronto’s Christmas Market brings the spirit of the season to life! One of Toronto’s favourite holiday events, guests are invited to rediscover the magic and romance of Christmas by taking in stunning light canopies, enjoying unique shopping experiences, traditional music and dance performances, and activities for the whole family to enjoy. If you haven’t checked it out yet, make sure to head down soon.
Where: Distillery Historic District, 55 Mill Street
When: Now until December 22

What: Soulpepper’s beloved production of A Christmas Carol has become a Toronto holiday tradition. Follow Ebenezer Scrooge as he is visited by three ghosts who help him understand the importance of charity in the holiday season.
Where: Young Centre for the Performing Arts, 55 Mill Street
When: December 2 at 4:30 pm

What: This is a unique opportunity to experience the breath-taking richness of modern Chinese culture and discover a spectrum of leading contemporary artists. Combining choruses, vocal solos, dance and opera, Enchanting China features a dazzling 60-piece orchestra and renowned singer Gong Linna alongside special guests including the Ottawa Bach Choir.
Where: Sony Centre for the Performing Arts, 1 Front Street East
When: December 2 to 3 at 5 pm

What: No pet? No problem! Everyone is invited to come to this fun event & enjoy some delicious baked goods while browsing the Silent Auction and Raffle Prizes for some great holiday gifts for your loved ones. 100% of the proceeds from the event go directly to the animals here at the Toronto Humane Society!
Where: Toronto Humane Society, 11 River Street
When: December 2 to 3

What: The 3rd annual Hoppy Holidays craft beer sampling event! A festive spin on the much loved “Beer Experience” event, complete with seasonal brews, one-off creations, and yuletide beer cocktails!
Where: The Berkeley Church, 315 Queen Street East
When: December 6 at 6 to 11 pm

What: Gathering the most interesting talent from across Toronto’s diverse entertainment community, Holodeck Follies is a fast-paced 90-minute show filled with improvised Star Trek episodes and special guest performers from the musical, stand-up, and sketch comedy community.
Where: The Social Capital Theatre, 154 Danforth Avenue
When: December 7 at 7:30 pm

The Man in Black: A Tribute to Johnny Cash

What: Close your eyes and imagine the unique sound of Johnny Cash, as if it were live and for the first time in the early 1960s. Now open your eyes and experience this great singer songwriter recreated on stage in the hit musical tribute: The Man in Black, A Tribute to Johnny Cash.
Where: Panasonic Theatre, 651 Yonge Street
When: Now until December 10

What:  Head down to Toronto’s busiest transit hub this December to visit the Union Station Holiday Market. This holiday market features a curated mix of approximately 20 local businesses, designers, artisans and gourmet food vendors offering a selection of the city’s best gifts.
Where: Union Station, 65 Front Street West
When: December 5 to 16

What: Based on the hit film, Sister Act The Musical tells the hilarious story of Deloris Van Cartier, a wannabe diva whose life takes a surprising turn when she witnesses a crime and the cops hide her in the last place anyone would think to look – a convent! You know the story, now watch it on stage.
Where: Where: Lower Ossington Theatre, 100A Ossington Avenue
When: Now until January 28, on Thursdays, Fridays, Saturdays, and Sundays.

What: Check out the Frost Fair at Fort York! Stroll through Canada’s largest collection of War of 1812 buildings, where you can shop for unique gifts made by local artisans; including jewellery, heritage inspired reproductions and holiday greenery. There is much to do for the whole family.
Where: 250 Fort York Blvd.
When: December 3 at 10 am to 5 pm

What: Join the Sony Centre in December for two community classes of Beyography! Beyography is a tribute dance class where you are encouraged and welcomed to release your inner Diva. In this intensive, two-hour class you’ll learn the choreography to a music video!
Where: 1 Front Street East
When: December 6 and 13, from 5:30 to 7:30 pm

A Victorian Christmas at Mackenzie House

What: This festive season take a step back in time to Victorian Toronto and experience the magic of a traditional Christmas in an 1859 row-house. Escape from the hustle and bustle while you enjoy a sample of mulled cider and a biscuit in the warmth of the historic kitchen. Discover the story of how families celebrated Christmas in 19th century Toronto as you tour the Mackenzie home dressed in greenery for the holidays.
Where: 60 Bond Street
When: Now until January 8

What: They made a list and checked it twice–of 12 local breweries, naughty and nice – to join the annual all-you-can-taste, beer-drinking extravaganza. Throw on your ugliest Christmas sweater and cross a beer (or 12) off your list. There will be live music, DJs, and enough suds to give Santa’s village a hangover.
Where: Gladstone Hotel, 1214 Queen Street West
When: December 9 from 6 to 9 pm

What: A magical evening of lamp-lit rooms, decadent desserts and carollers. Space is limited for this fundraising event – early bookings recommended.
Where: Scarborough Museum, 1007 Brimley Road
When: December 10 from 6:30 to 9 pm

What: Ever since its premiere in St. Petersburg in 1892, The Nutcracker has been an integral and irreplaceable part of Christmas celebrations worldwide and a work of theatrical exuberance synonymous with the unfettered joys of childhood wonderment. The National Ballet of Canada’s touching and multilayered version of the famous ballet, choreographed by James Kudelka, is a spectacular re-imagining that has been greeted with rapturous acclaim by audiences whenever it is performed.
Where: Four Seasons Centre for the Performing Arts, 145 Queen Street West
When: December 10 to 31

What: Delivered in partnership with Etsy Canada, the Makers Market is the place to find locally-crafted gifts, treats and other surprises! With new vendors every day, you’ll be sure to find something for everyone on your list.
Where: Evergreen Brick Works, 550 Bayview Avenue
When: December 10 to 23

The Illusionists – Live from Broadway

What: Direct from Broadway, the world’s best selling magic show is coming to Toronto. This mind blowing spectacular showcases the jaw dropping talents of seven of the most incredible Illusionists on earth. The Illusionists – Live From Broadway has shattered box office records across the globe and dazzled audiences of all ages with a powerful mix of the most outrageous and astonishing acts ever to be seen on stage. This non-stop show is packed with thrilling and sophisticated magic of unprecedented proportions.
Where: Princess of Wales Theatre, 300 King Street West
When: December 13 to January 7

What: This 2-hour holiday cruise through the Toronto Harbour will include food stations, a costume contest (ugliest outfit wins!), and a complimentary Bad Santa photo booth.
Where: Mariposa Cruises – Pier 6, 207 Queens Quay West
When: December 16 at 9 pm

What: Because what is the holiday season without a little Kevin McAllister? Clearly a fan fave, this is the third annual Hot Docs Home Alone Quote-Along. Get ready to get rowdy!
Where: Hot Docs Ted Rogers Cinema, 506 Bloor Street West
When: December 16 at 9:30 pm

What: The 2nd Annual Let it Snow Craft Fair returns, bringing together talented local artisans from across Toronto.
Where: Artscape Youngplace, 180 Shaw Street
When: December 16 to 18

What: Presented by the Toronto Etsy Street Team, Christmas time is prime time for craft shows and this is one cozy, intimate handmade show, on the LAST shopping weekend before Christmas. There will be festive music, handmade goods and vintage sellers, along with yummy treats!
Where: Church of Saint Stephen-in-the-Fields, 103 Bellevue Ave at College Street
When: December 17 from 11 am to 5 pm

What: Fun for the whole family this holiday season. Join Greater Toronto Skating Academy for a Skate with Santa. This event is free. Bring your friends, bring your skates and a helmet and bring your joyful spirit.
Where: Scotiabank Pond, Rink 4, 57 Carl Hall Road
When: December 17 from 11 am to 12:30 pm

What: Skip the lines and the crowds this holiday season and find the special gift for that special someone on your list all in one place. All your favourite handmade, local, art and vintage vendors and artisans return to bring you a diverse and truly gift-worthy selection of goods. Sure to please everyone on your list! Two days, two spectacular line-ups of vendors all for one truly local holiday market. Admission is free!
Where: Studio Bar, 824 Dundas Street West
When: December 17 and 18 from 11 am to 6 pm

What: Toronto’s best winter block party returns again this season! Top local and international DJs rock the Natrel Rink while you skate and dance under the stars. This year, warm up and have a delicious snack or some craft beer rinkside at the new Boxcar Social location.
Where: Natrel Rink, 235 Queens Quay West
When: December 17 until February 18

What: Bunz Flea is back with a Holiday edition, which promises to be even bigger and better than the last one! We will be able to house even more vendors this time, and there promises to be something for everyone, as well as plenty of trading!
Where: Gladstone Hotel, 1214 Queen Street West
When: December 20 at 7 pm

What: Celebrate the holiday season at the City of Toronto’s annual Christmas Concert. Beginning at 11:30 am in the Rotunda of City Hall, the concert will feature local choirs: All the King’s Voices, Toronto Beaches Children’s Chorus and Toronto Mass Choir. They will be joined by the Tower Brass and organist James Bourne, while popular Toronto media personality Adam Wylde will once again emcee. As always, Santa Claus will make a special guest appearance.
Where: City Hall, 100 Queen Street West
When: December 23 at 11:30 am

What: Toronto plays host to the preliminary round for the Canadian team at the 41st World Junior Hockey Championships.
Where: Air Canada Centre, 50 Bay Street
When: December 26 to January 2

What: Marshmello, Zedd, Borgore, and more play the two-day music festival taking place at Rebel.
Where: Rebel, 11 Polson Street
When: December 26 to 27

E.T. The Extra-Terrestrial in Concert

What: Experience all the mystery and fun of this unforgettable adventure in the beloved movie that captivated audiences around the world, complete with John Williams’ Academy Award-winning score performed live by a full symphony orchestra in sync with the film projected on a huge HD screen!
Where: Sony Centre for the Performing Arts, 1 Front Street East
When: December 29 and 30 at 7:30 pm

What: Ring in the New Year with #ROMNYE, and dance the night away while enjoying delectable bites, and drinks. Celebrate with special access to our spectacular exhibition CHIHULY, live bands, DJs, and, of course, a sparkling toast at midnight.
Where: Royal Ontario Museum, 100 Queens Park
When: December 31 at 9 pm

What: Run or walk in the cool Liberty Village neighbourhood with super views of the Toronto Skyline. Accurate chip timed 5k, $10 Winter Gloves or Toque with Every Registration, Post Race Food, on course fireworks, $30 swag bag, stylish and unique finishers’ medal. Free glass of bubbly or Steam Whistle Beer to all finishers to celebrate your race and of course the New Year.
Where: Liberty Village, King Street West
When: December 31 at 10:30 pm