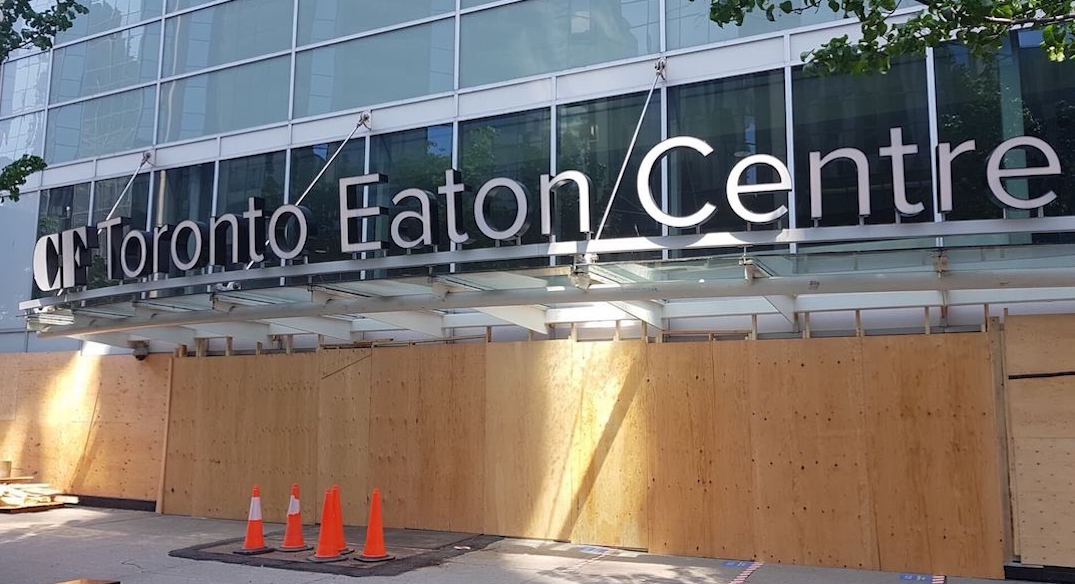 The Eaton Centre will be closed on Friday and the rest of the weekend, due to the number of “large gatherings planned in the city.”

On Thursday, the shopping mall posted a statement on its website.

“With a number of large gatherings planned in the city over the course of the weekend, CFToronto Eaton Centre will be closed on the following days: Friday, June 5; Saturday, June 6 and Sunday, June 7.”

The mall will resume operations again on Monday.

“Thank you for your understanding, cooperation and please stay safe,” the statement said.

With a number of large gatherings planned in the city over the weekend, CF Toronto Eaton Centre will be closed on the following days:

We will resume operations on Mon, June 8. Thank you for your understanding and please stay safe. pic.twitter.com/dbjOFOhszK

The TTC also confirmed the closures, adding that all Eaton Centre connected entrances at Dundas and Queen stations will be closed on all three days.

The Eaton Centre is mostly closed due to COVID-19, although some shops have opened over the past weeks as the provincial government began its reopening stages.

A march is planned on Friday that starts at Yonge and Bloor and ends at City Hall.

A post shared by TheMarchForChange (@themarchforchange) on Jun 4, 2020 at 9:07am PDT

However, it’s important to note that the Toronto chapter of Black Lives Matter said they are not involved in today’s march or any other demonstration planned this weekend.

While the hope is for the protests to remain peaceful, the closing of Eaton Centre is seen as a precaution for the march.

“We know of a march starting at 12:30 today from Bloor going down Yonge. The issue is — and the protestors and organizers have said clearly they want a peaceful quiet protest – there are other organizations infiltrating based on this protest being scheduled that don’t have the same goals and purpose,” Mark Garner, Chief Operating Officer of Downtown Yonge BIA, told Daily Hive.

“So based on that, we have precautions to mitigate potential risk, there’s certain things insurance will and will not cover.”

He said that a source informed the downtown BIA on the potential challenges and risks instigating their need to have precautions.

Garner added that the hope is for a peaceful protest, like what occurred last weekend, but “you plan for worst and hope for the best.”

“There’s a lot of misinformation going around on social media. Like the organizers have said, please don’t come if you won’t be peaceful. That is not what they want,” Garner said.

Last weekend, thousands gathering in the city to demand justice for Regis Korchinski-Paquet who reportedly fell to her death after police were called to her home.

Ontario’s police watchdog is investigating the incident after her family raised questions about whether officers’ actions contributed to her death.