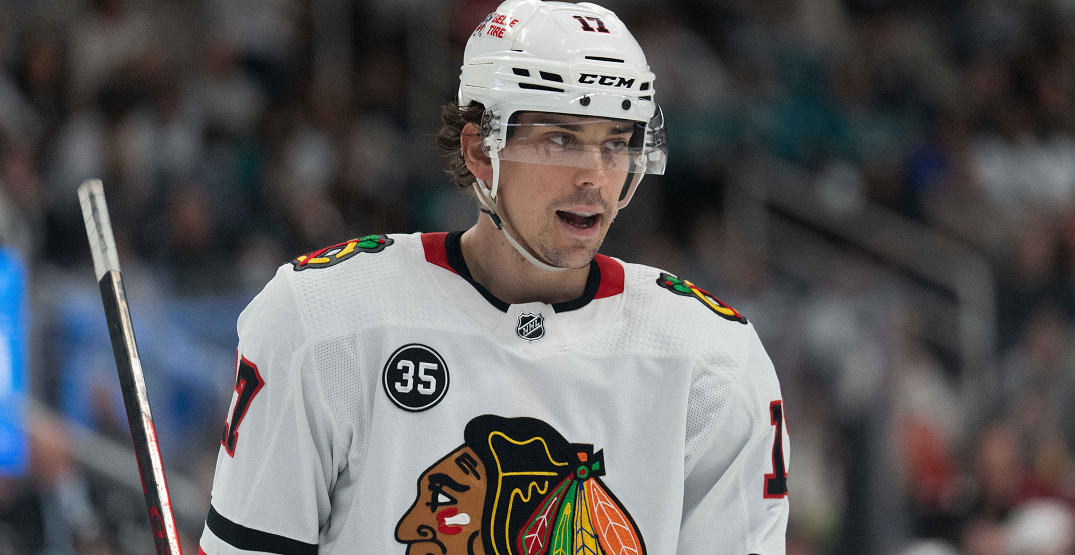 Just over three weeks out from the start of NHL free agency, Chicago Blackhawks forward Dylan Strome remains without a contract.

A restricted free agent this summer, Chicago has the option to extend the former third overall pick Strome a $3.6 million qualifying offer and work towards a new deal with the 25-year-old forward.

But it hasn’t happened yet, with the deadline set for July 11 to work things out.

“The way Strome sees it, one of two things can happen: Either the Blackhawks will make the qualifying offer and they’ll hammer out a new contract, or they won’t make a qualifying offer and will instead trade his rights,”  the Athletic’s Mark Lazerus wrote last month in an interview with Strome.

A third, though admittedly far less likely option is also possible: Strome’s qualifying offer isn’t made by Chicago, he isn’t traded, and then enters the unrestricted free agency pool on July 13.

If they’re willing to wiggle things around this offseason, bringing in Strome by way of trade or signing would make a ton of sense for the Toronto Maple Leafs.

How’d we get here?

In the 2015 NHL Draft, the Arizona Coyotes selected Dylan Strome with the third-overall pick. One pick later, the Leafs took Mitch Marner.  In hindsight, it’s almost certainly a move Arizona would like back, while the Leafs are quite happy with how that one turned out.

In his draft class, Strome sits 18th in scoring with 170 career points, while Marner sits second with 455 points, behind one Connor McDavid.

In 2018 after just 48 NHL games with the club, Strome was traded from Arizona with Brendan Perlini to Chicago in exchange for Nick Schmaltz. Schmaltz and Strome’s production has been similar since the trade:  Schmaltz has put up 150 points in 202 games in Arizona, while Strome has 154 in 225 in Chicago.

(Perlini, meanwhile, has bounced around in Detroit and Edmonton, while also spending a year in the Swiss league since being traded with Strome.)

This past year, Strome put up a career-high 22 goals and added 26 assists for 48 points in 69 games. Fighting his way back from being an early-season healthy scratch, Strome put up his second most productive NHL season.

But outside of the production being about equal in terms of who he was traded for, Chicago has been, well, quite bad while Strome has been there. They’ve finished sixth or seventh in their division each of the last five years, finishing with 68 points this past season.

Chicago has never quite committed to a full rebuild since winning three Stanley Cups in six seasons from 2010-15, but now might finally be the time. And trading mid-20s players (as well as older veterans like Jonathan Toews and Patrick Kane) is usually the first sign the rebuild might be on.

Big-name Ontario-born players such as John Tavares, Joe Thornton, and Jason Spezza have typically called Toronto home in the mid-to-late stages of their career. But what if Mississauga native Dylan Strome made the move to Toronto during his mid-20s?

From a player standpoint, Strome has plenty to offer. He hasn’t blown anyone out with his offensive numbers in the NHL, but he commands a solid all-around game that could fit in nicely to Toronto’s middle-six forwards.

Strome is a pretty good player if you ask me. #Blackhawks https://t.co/4dVgMyA0Hp pic.twitter.com/9XsBZWwwGd

From a money standpoint, the fit might be a little tighter.

With a projected $7.8 million cap hit for next season, the Leafs have eight free agents of their own to deal with: four restricted (Timothy Liljegren, Rasmus Sandin, Pierre Engvall, and Ondřej Kaše) and four unrestricted (Ilya Mikheyev, Colin Blackwell, Ilya Lyubushkin, and most notably, goaltender Jack Campbell).

Toronto’s got 10 forwards signed next season for a total of $48 million, leaving about three roster spots open on the front end. Evolving Hockey projects Strome’s cap hit to be $4.596 million on a three-year deal, but that also predicts he stays in Chicago.

In a new environment with an up-tempo offence like Toronto, perhaps Strome is interested in a shorter, cheaper “show-me” contract to try to prove himself for a next big deal.

As for the return, Toronto doesn’t have much in terms of current draft capital to offer, owning just three picks in this year’s entry draft. But they still retain their 2022 first round pick at 25th overall, which might make sense to move as a package in favour of a proven commodity like Strome that can help them win now. Mix in a prospect or two, and that seems to be about the going rate for a player like Strome.

If Toronto’s willing to make the move, a Strome to the Leafs deal could make a ton of sense for everyone involved.