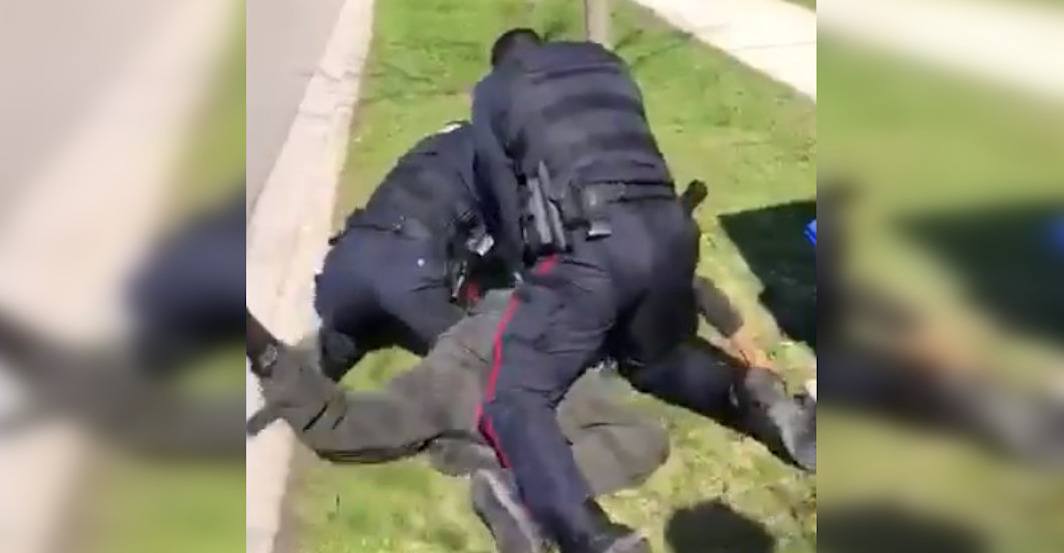 Durham Regional Police say officers who were filmed punching a 16-year-old boy during an arrest in Whitby last month were following “proper protocol.”

In the video, which was widely shared on social media and racking up over 160,000 views on Facebook alone, shows an officer pinning the teen down with his knee and punching him repeatedly in the back.

A female officer can also be seen trying to hold the boy down, while the officers can be heard asking at the boy to move his hands behind his back so they can handcuff him.

The person filming the video can be heard yelling at the police to stop using force on the teen.

According to police, on Wednesday, May 15, at approximately 3:30 pm, members of Central West Division were dispatched to a call regarding a distraught male who was possibly armed with a knife.

When officers arrived, they located the 16-year-old male walking with friends in a residential area by Cathedral Drive and Brookstream Court in Whitby.

Police say the teen had existing cuts to his hand and was uncooperative with officers, who tried to talk to him.

According to the official statement from the police, the officers, while attempting to apprehend him, brought the teen to the ground and tried to handcuff him.

“Several punches were used to gain compliance of the male, who refused to make his hands available. The male was eventually placed into custody and was not injured,” reads the police statement.

Police say a copy of the video and the officer’s Use of Force report will be forwarded to the training branch and to the Professional Standards Unit for review.

However, Durham police maintain that the officers involved in the incident are not under investigation and the officers followed proper protocol based on the information provided.

Warning: this video contains material that some viewers may find disturbing.