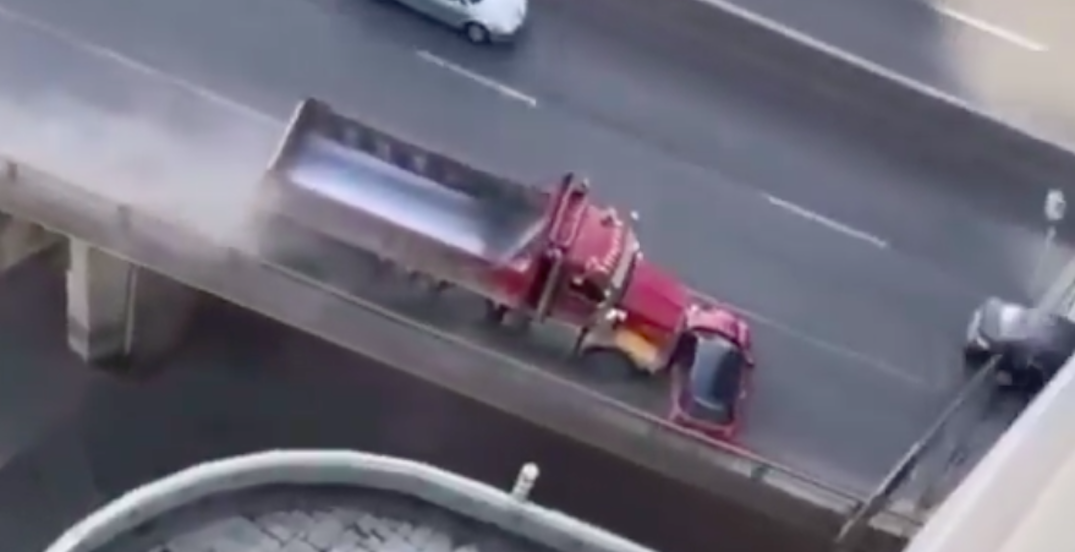 A dump truck driver is facing charges after pushing another vehicle for half a kilometre up the on-ramp onto the Gardiner Expressway on Tuesday.

DC Scott Matthews posted a video to Twitter showing that a driver of a Cooper Mini was “lucky to escape with minor injuries” after being pushed up the on-ramp and onto the Gardiner Expressway.

Matthews noted that the truck driver was charged.

The driver of this Mini was lucky to escape with minor injuries after being pushed for over half a kilometre up an on-ramp and onto the Gardiner Expressway yesterday. The dump truck driver was charged.#beaware#drivesafe pic.twitter.com/ZNuZSUgiTB

In a statement to Daily Hive, Sgt. Murray Campbell from Traffic Services said the incident took place just before 10 am at the intersection of westbound Lakeshore and Jarvis.

“The dump truck and the small vehicle became involved in a collision at the ramp for the westbound Gardner Expressway. The dump truck continued up the ramp and onto the expressway, pushing the vehicle sideways the entire way,” Campbell said.

Eventually, the dump truck was flagged down by passing motorists.

Campbell noted that the driver of the small vehicle was assessed at the scene, by paramedics, but not transported to the hospital.

The driver of the dump truck was charged with several driving and commercial motor vehicle offences.