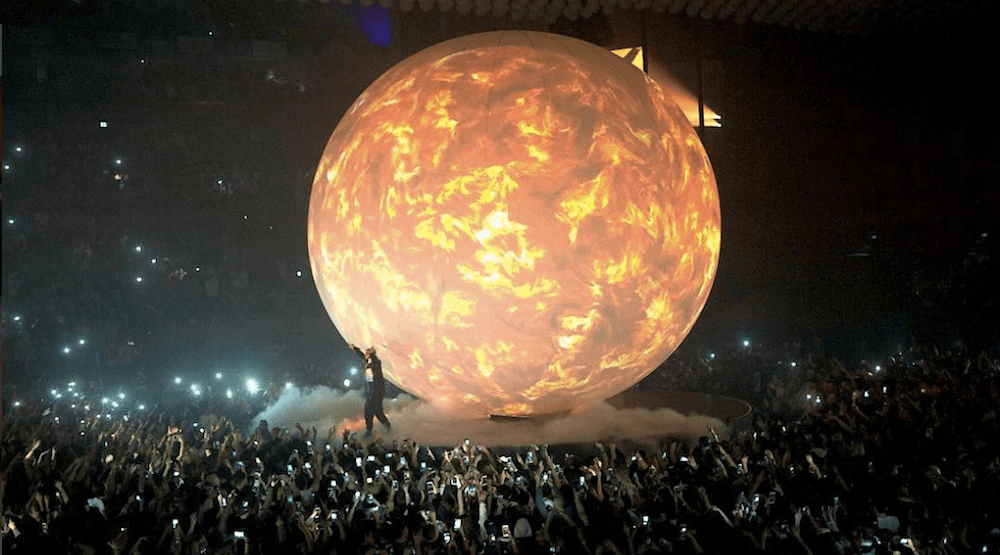 Drake is currently across the pond, playing at his Boy Meets World tour in Europe.

And throughout his last few days playing at the O2 Arena in London, a famous Toronto art work has been showcased on stage.

Director X’s Death of the Sun, a massive fiery orange sun, which was displayed at Nathan Phillips Square as part of last fall’s Nuit Blanche, was the centre of Drake’s show.

The structure hides under a circular extension of the main stage, and was being lit up/inflated partway through the show.

But the beautiful stage prop didn’t last long on the tour. Earlier this week, Travis Scott came out as one of Drake’s guests. And while Scott walked on the circular stage, he fell right into a hole in the middle — assuming that is where the Sun usually pops out of.

Yes, it is as funny as it sounds.

Drake pulls out Travis Scott out of a hole after he fell and they continue performing 😂 pic.twitter.com/t6MfOdWM06

And not to worry, Scott is fine. Drake and his people helped him out.

But the Sun did not survive the fall. And because it is part of his show, Drake, being the kind man that he is, offered to refund the crowd in the arena. The O2 Arena has a capacity of 20,000.

Drake announced he was refunding 20,000 tickets and giving a free show for the night because Travis Scott fell and broke his globe pic.twitter.com/5u3qTIzjAB

Although there is no official confirmation, concert attendees caught Drake saying he was doing the show “for free tonight,” adding that he would “deal with it later”.

Drake continues his tour in London this week.

But RIP massive sun. You simply dared to fly too close to Travis Scott…

Just touched down on the other side 😁🌎🚲