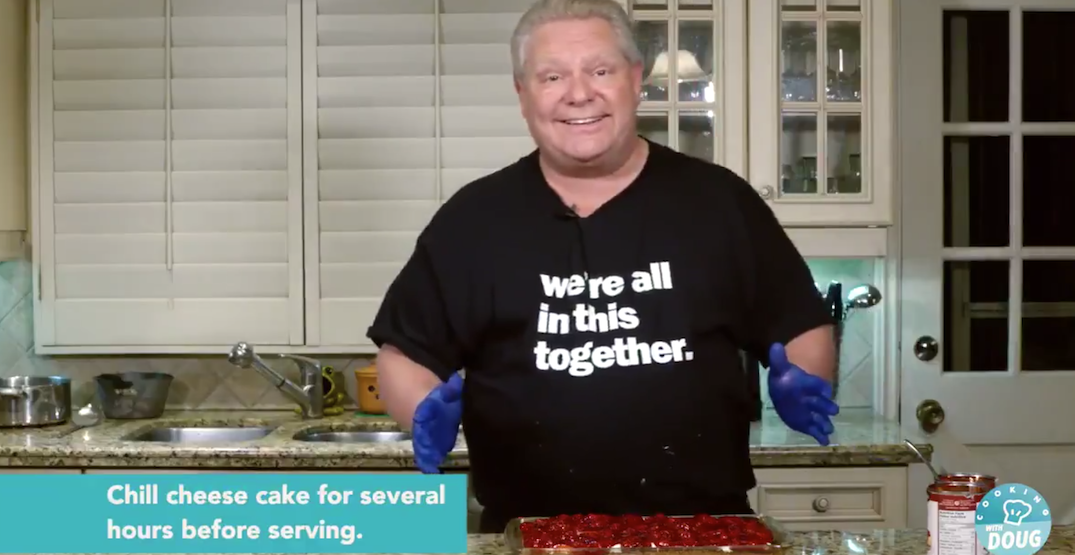 And now, here’s sharing the sweetness.

The recipe’s teaser trailer — reminiscent of a Guy Fieri Diners, Drive‑Ins and Dives commercial — dropped on Thursday. The premier showed off his baking chops while a voiceover explained the details would be released on Friday. The day has come!

This long weekend try making my famous cheesecake! I’ve been making this recipe for years and it always brings back good family memories. Show us your #OntarioSpirit and share your baking videos! #cheesecake #washyourhands pic.twitter.com/sfA9K4epki

Ford is known to make a joke, or share a fact or two about himself, during his daily press conferences. While his cheesecake comment spiralled into something greater, the premier has been infusing a little fun into his daily addresses.

Last week, we found out that Ford is a “terrible golfer,” even though, he said, “God knows, I need a little bit of exercise.”

And that brings us to the cheesecake. After being asked about spending time with his family, including his daughters who don’t live in his home, Ford began talking about them.

The premier said he’s heard from many people about the problems with getting flour and yeast since so many are baking while in self-isolation.

“We will make sure we have those on the shelves, it’s so important,” he said, and then casually added, “and by the way, I make the best cherry cheesecake ever.”

He said he makes the cake from scratch, with no recipe, because he has the process “down pat.”

However, some who have probably tried this recipe appear to disagree.

Perhaps the recipe release is meant to settle the debate, once and for all, with opinions from those who DIY the cheesecake in their own kitchens.