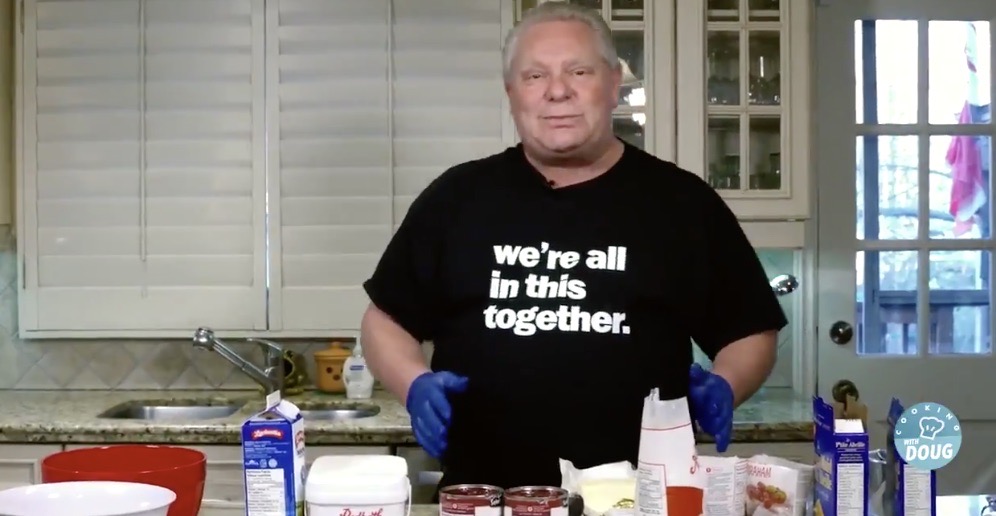 UPDATE: The full recipe is now released — you can find it here.

It was just days ago that Premier Doug Ford said he makes the best cherry cheesecake ever, and now, here’s sharing the sweetness.

In a teaser trailer reminiscent of a Guy Fieri Diners, Drive‑Ins and Dives commercial, the premier showed off his baking chops while a voiceover explained the complete recipe and video would be released on Friday.

Do you know what one of the most popular ways to manage stress is? Baking! Stay tuned for some long-weekend inspiration…#cheesecake pic.twitter.com/IZyGjnUB68

In case you didn’t know, Ford is known to make a joke, or share a fact or two about himself, during his daily press conferences. And Monday was no exception.

Last week, when Sidewalk Labs announced it was no longer working on its giant Toronto waterfront development, Ford casually said: “Sidewalk is taking a walk, don’t mind the pun.”

Last week, we found out that Ford is a “terrible golfer,” even though he said, “God knows, I need a little bit of exercise.”

And that brings us to the cheesecake.

After being asked about spending time with his family, including his daughters who don’t live in his home, Ford began talking about them.

The premier said he’s heard from many people about the problems with getting flour and yeast since everyone is doing a lot of baking while in self-isolation.

“We will make sure we have those on the shelves, it’s so important,” he said, and then casually added, “And by the way, I make the best cherry cheesecake ever.”

“I do it from scratch. No recipe, I got it down pat,” said Ford.

But some, who have probably tried this recipe, seem to disagree.

Tune in tomorrow for the full recipe.