Dooring accidents are on the rise in Toronto.

Dooring happens when someone in a car hits a cyclist by opening their car door into traffic.

Although the incidents are on the rise, Cycle Toronto reports that dooring was not included in the City’s Road Safety Plan, which mostly focuses on collisions involving a car striking a person riding a bicycle.

“Dooring collisions can mean life changing injuries or death for cyclists. The best thing the City can do to protect cyclists is to build a minimum grid network of protected bike lanes. However, streetcar tracks make that challenging,” said Jared Kolb, Executive Director of Cycle Toronto. “At the end of the day, people riding bicycles are just average Torontonians trying to get from A to B like everyone else. They shouldn’t have to risk lasting physical trauma or death to do so.”

Cycle Toronto mapped out the locations of dooring collisions in the city, showing that streets with streetcar tracks and on street parking as the most common areas for the accident.

The map above highlights streets with bike lanes that had lower rates of dooring collisions than streets without them. The dooring rates on streets with protected bike lanes, such as on Richmond & Adelaide, were even lower, according to Cycle Toronto.

The bike advocacy group compiled the number of bike collisions as reported to the Toronto Police Service between 2014 and 2016, showing 516 dooring incidents with a spike over the warmer months. 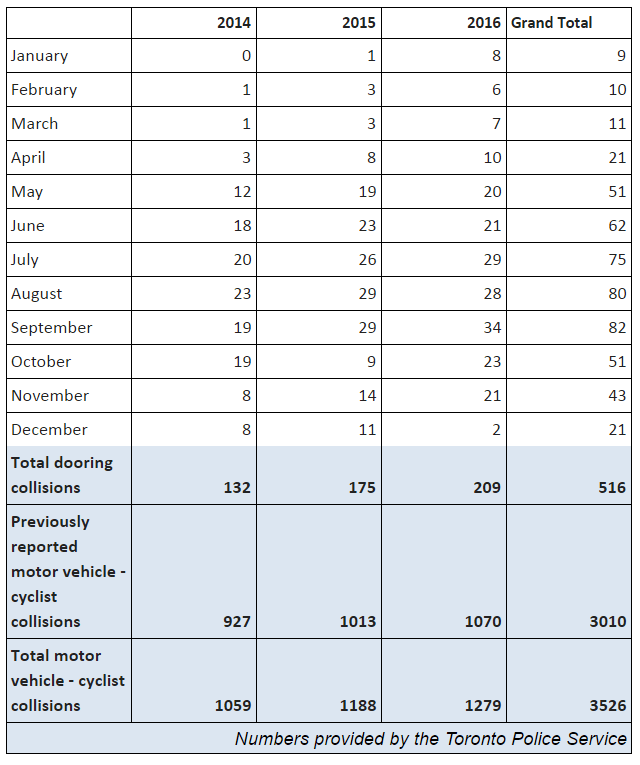 Cycle Toronto recommends drivers to use the right hand when opening the car door, and always shoulder check before opening the door.

As for cyclists, they recommend avoiding riding in the door zone by riding at least one metre from parked vehicles.