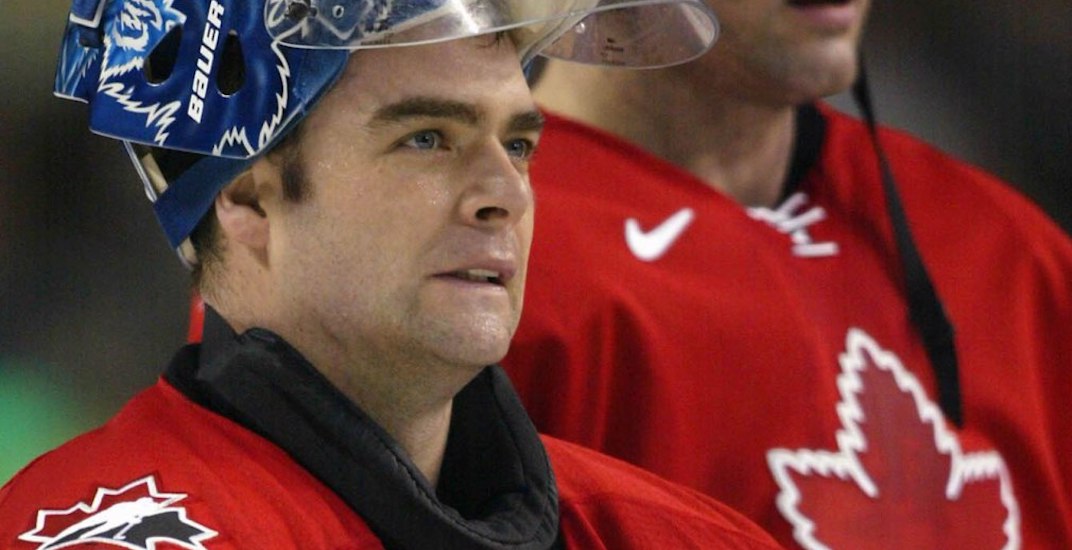 There are 35 goalies in the Hockey Hall of Fame, and Curtis Joseph should not be far behind.

No, he doesn’t have his name on the Stanley Cup, and he didn’t amass much in the way of personal hardware, either. But Joseph did emerge from a tough upbringing to crack the NHL as an undrafted goalie, putting his name among the game’s all-time best at his position in the process.

The biggest argument for Joseph’s induction is that he racked up a lot of Ws and stopped a hell of a lot of pucks along the way. And really, what else is a goalie meant to do?

The number of shots he faced is quite stunning:

Joseph was also a stud in the postseason, where he ranks seventh among goalies in games played (133), 13th in wins (63), sixth in saves (3,559) and posted 16 shutouts. Again, he never played for a Cup winner, although he did lead the Maple Leafs to a Conference Final appearance in 2002. More memorably, he led the Oilers to a crazy upset win over the Dallas Stars in the 1997 playoffs.

Joseph didn’t win a Vezina Trophy, but he was named as a finalist on three occasions, and he finished in the top 10 in four additional seasons. He also earned some Hart Trophy consideration, finishing 11th in 1994-5 and 20th in 1997-98. On top of that, he recorded the NHL’s best save percentage in 1992-93.

He was a three-time NHL All-Star, which actually used to mean something.

Internationally, he won a silver medal for Team Canada at the 1996 World Championships, and later that year he helped Canada to a second-place finish at the inaugural World Cup, where he was named the tournament’s leading goaltender. He later won gold at the 2002 Olympics – albeit after taking a backseat to Brodeur – and at the 2008 Spengler Cup, where he won three games at age 40 and briefly extended his NHL career as a result.

That’s three best-on-best tournament appearances for a country that churns out the best goalies in the world, a testament to how good he was.

Joseph recently revealed his personal story upon publishing CuJo: The Untold Story Of My Life On And Off The ice. After his teenage parents decided to give him up for adoption, he was raised in a North Toronto mental institution run by his new parents.

Here’s part of his description of the experience, via The Edmonton Sun:

Mother wasn’t normal. She ended up using all the drugs that were given for the men, 20 mental patients. The drugs were flowing fast and furious. It just wasn’t normal.

I was in the house but there was not a lot of parenting going on. They never took me to one baseball practice or hockey practice or went to one game in my entire life.

By the time I was eight years old I lived on a steady diet of stale cookies, processed cheese slice sandwiches, and frozen institutional hamburgers. God knows what they were made of. Every night I’d throw one on a dirty old barbeque we kept outside the kitchen door.

My bed was a mattress on the floor. It was tough to find a dry corner because Mom’s cats peed and shit all over it. I didn’t have sheets or anything, just an old blanket. In the winter I’d sleep in an old coat that one of the men in the house had thrown out. Mom treated her animals better than she treated us kids.”

That he was able to thrive as a goalie is a testament to his character and drive, and that’s worth honouring.

Here’s the rub: A goaltender getting that call is rather rare in this day and age. Just seven goalies have made it in since 1990:

In that same time period, 78 skaters have got the call for the Hall.

Given that goaltending is the most important and demanding position in hockey, there ought to be more of them represented in the Hall of Fame.

Hall of Fame arguments can and should be made for a few of Joseph’s contemporaries, namely Mike Vernon, Mike Richter and Tom Barrasso. Perhaps it’s time to do what these guys rarely did: let ’em in.

And it should begin with CuJo.