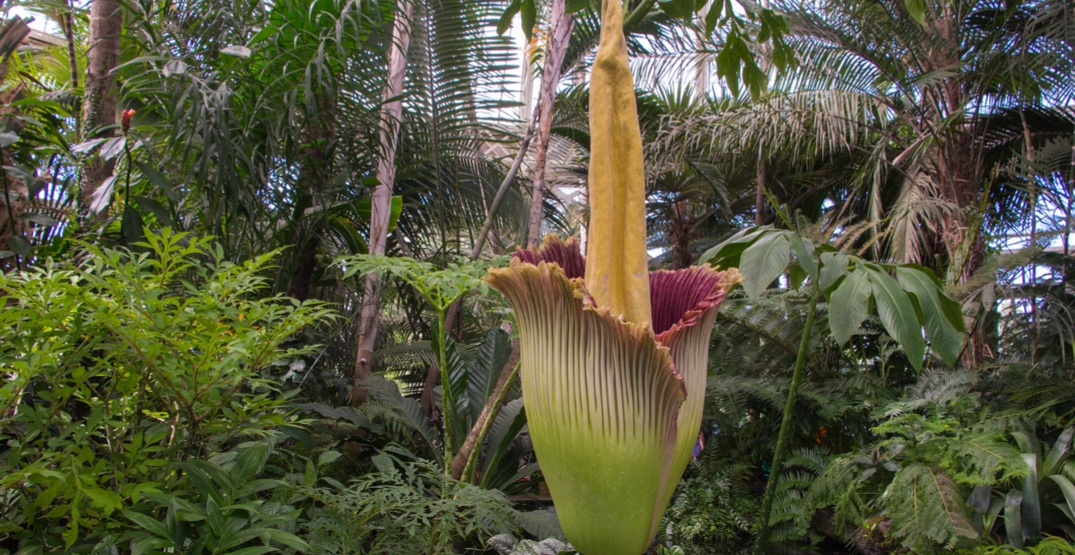 The Toronto Zoo is about to get stinky because a rare, exotic plant that smells like rotting flesh is about to bloom.

The Amorphophallus titanum—also known as the corpse flower— is one of the largest flowers on the planet and it’s about to unleash its stench in Toronto very soon.

#CorpseWatch update: Pablo “Pe-ew”caso grew 1.75 inches overnight. It now reaches 39.25” tall. The colour is starting to intensify on the spathe (skirt) and the base of the flower is starting to swell, which indicates the flower is progressing towards opening. #WhatsThatSmell pic.twitter.com/WcrBaVXRYj

Extended viewing hours will be in effect during the bloom period. Once we confirm when the plant is projected to start its 8-36-hour bloom, we will invite the public to visit and experience this unique opportunity. Please note this is a separate ticketed exhibit. #WhatsThatSmell

According to the Toronto Zoo, the giant stinky plant is “progressing towards opening.”

As it blooms, the flower will spread its flesh coloured petals and emit “rancid fumes” in order to attract pollinator insects that feed on dead animals.

The corpse flower bloomed in Vancouver this summer and curious guests lined up for hours to catch a whiff.

It can take up to six to ten years for an Amorphophallus titanum to produce its first flower.

Zoo’s Horticulture Division currently cares for six specimens of the plant and the one that is about to bloom is opening four years ahead of schedule.

The Toronto Zoo will be extending its viewing hours during the bloom period, which lasts anywhere from eight to 36 hours.